A warship had to be scrambled by the Royal Navy to the North Sea to deal with two Russian cruise missile submarines.

The two vessels were picked up as they made their underwater journey south along the Norwegian coast from the Arctic.

HMS Portland, a Type 23 frigate, shadowed them as they surfaced separately in the North Sea, north west of Bergen, Norway, on July 16 and 19.

The supervision was taken over by NATO and Baltic forces as they continued to St Petersburg for Russian Navy Day celebrations on July 31.

HMS Portland’s Commanding Officer, Commander Tim Leeder, said: ‘Our success on operations marks the culmination of many months of specialist training and exercises. 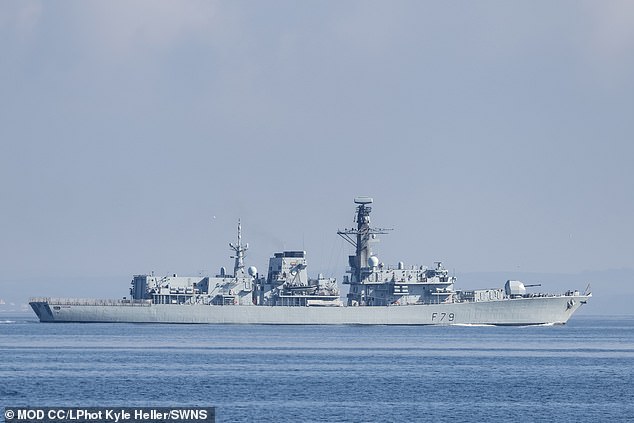 Warship HMS Portland was sent to the area in the North Sea, north west of Bergen, Norway ‘Critically, the cohesiveness of Royal Navy, RAF and our allies capabilities ensures that we are capable of conducting and sustaining these types of anti-submarine operations in the North Atlantic.

‘It is testament to my sailors’ dedication and professionalism, alongside that of our allies, that we are able to conduct this strategically crucial role.’

The Navy said Portland and her specialist Merlin helicopter – both equipped with cutting-edge sonars, sensors and torpedoes for submarine-hunting operations – reported on the movements of the Russian Northern Fleet vessels. It added that one of the RAF’s new long-range maritime patrol aircraft, the P8 Poseidon, also worked closely with HMS Portland to hunt and track the submarines.

It comes after HMS Portland joined in with NATO’s premiere submarine-hunting exercise.

Lessons learned there proved invaluable for the real-life situation in the North Sea.