Former New York City Mayor Rudy Giuliani claims he could’ve been seriously ‘killed’ after a supermarket worker slapped him on the back in Staten Island on Sunday during a campaign stop for his son, Andrew, who is running for governor.

‘His intent was to cause serious harm,’ Giuliani said in a Facebook video. ‘I could have fallen and cracked my skull and died.’

Giuliani, once called America’s Mayor, was shaking hands and passing out flyers at the ShopRite on Veterans Road at half-past 3 p.m., when a grocery store clerk, Daniel Gill, 39, came up behind and gave him a tap on the back, saying ‘What’s up, scumbag?’

The former mayor said he had just gotten out of the bathroom and was standing with a crowd of supporters when the man accosted him. 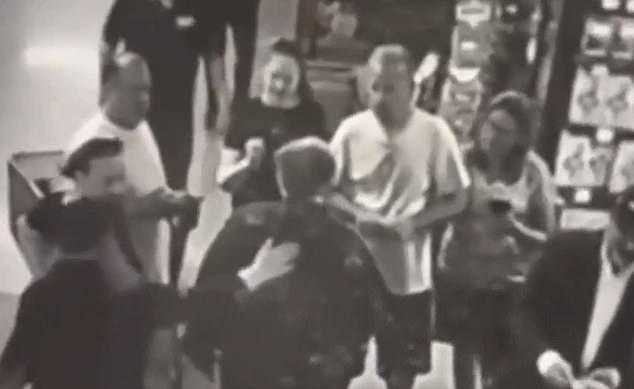 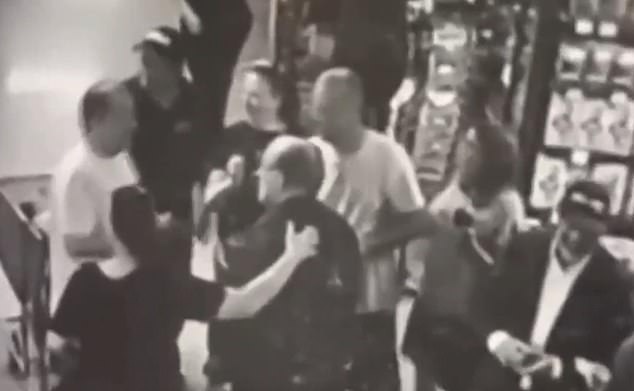 Bystander Rita Rugovar rubs Giuliani’s back to comfort him after grocery story worker Gill, 39, tapped him on the back and said ‘What’s up, scumbag?’ 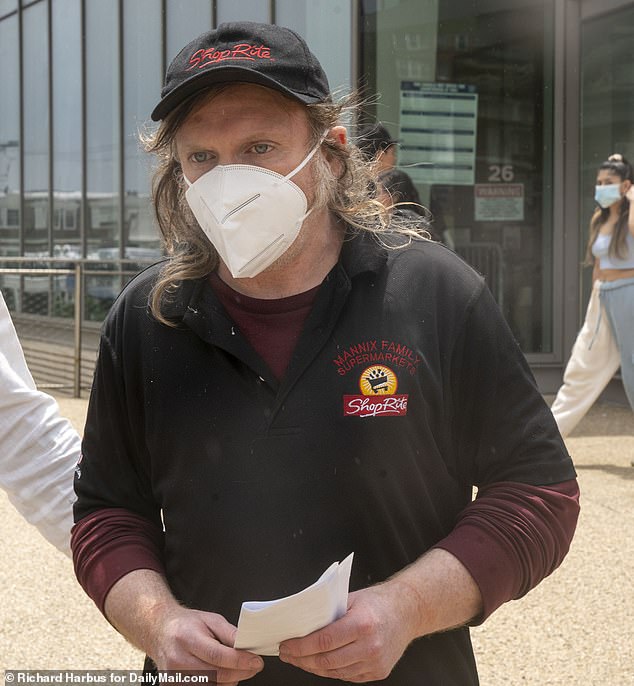 Daniel Gill, 39, of Staten Island was released without bail after being arrested for assault on former Mayor Rudy Giuliani

‘All of the sudden, I feel this ‘Bam!’ on my back,’ Giuliani told the New York Post. ‘I don’t know if they helped me not fall down, but I just about fell down.’

Gill was arrested on second degree assault charges, according to police.

He was arraigned Monday afternoon and released without bail.

On Facebook, in recounting the interaction, the former mayor, who was credited with cleaning up crime in New York City in the 1990s, said he felt like he was hit with a ‘boulder.’

‘It knocked me forward a step or two,’ he said. ‘It didn’t knock me down, but it hurt tremendously. I didn’t know what it was.’

Video of the incident shows the man approach Giuliani from behind and firmly tap the former mayor’s back as he walks by. 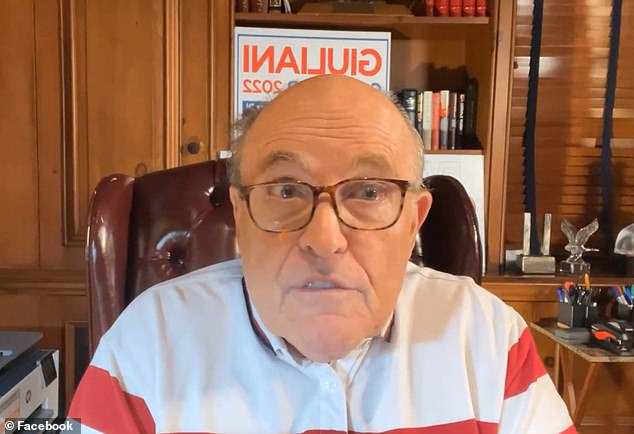 Rudy Giuliani, 78, discusses his encounter with a supermarket worker during a campaign stop for his son Andrew, who is running for governor

Giuliani doesn’t appear to stagger, but a woman standing next to him gently rubs his back as they both turn toward the supermarket worker.

Giuliani, who also worked as a lawyer for the 2020 Trump presidential campaign in trying unsuccessfully to over turn the election amid unfounded claims of voter fraud, said the woman standing next to him touched his back, ‘felt it and massaged it.’

‘He hit him so hard that, I felt it,’ Rita Rugova, an eyewitness, told the MailOnline.

Rugova said she was about to ask for Giuliani’s photo when Gill stormed passed.

‘He’s a senior citizen,’ she said. ‘No matter what your political views are, no one should be hit.’

A retired first-grade detective who was standing there when it happened didn’t initially make any moves to arrest Gill, who continued to berate Giuliani about his stance on abortion.

‘He kept cursing and menacing,’ Giuliani said, recalling how he turned to the detective and said ‘Let’s get him arrested. Let’s make an example out of him.’ 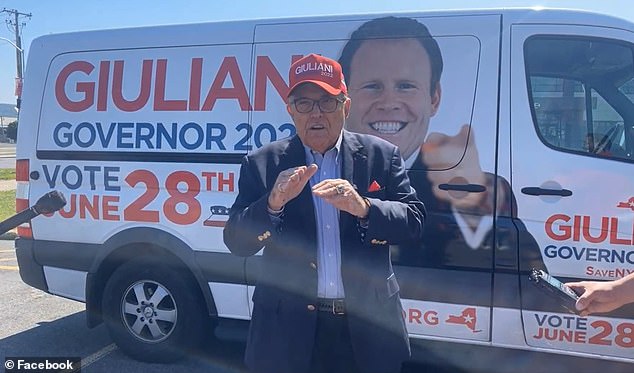 Giuliani was in Staten Island campaigning for his son, Andrew, when he was struck by a disgruntled supermarket worker, upset over the Supreme Court overturning Roe v. Wade

Giuliani refused medical treatment at the scene, but said he has an appointment to get the injury checked out by his doctor on Monday.

The supermarket worker appeared to be taking his frustration over the U.S. Supreme Court’s Friday decision to overturn Roe v. Wade, nullifying the constitutional right to abortion.

‘It underlines something that’s happening nationwide,’ Giuliani said. ‘It could have been much worse. This idea that you attack people, who, ‘In may case I’m pro-life, but respectful of the position of other people. I’m not protesting against other people. I respect the fact that there’s a division of opinion in this country. There are many good people of good faith with other opinions’

He called New York’s abortion law ‘sick and corrupt’ and said it allows women to terminate a pregnancy two days before childbirth.

Giuliani said that he’s normally very popular in Staten Island, saying he carried 85 percent of the county when he ran for mayor.

Staten Island is one of the only five boroughs where the number registered Republican voters, 95,308, come close to the number of registered Democrats, 124,491.