A Russian-born mother from Wisconsin has been accused of strangling her eight-year-old son to death and trying to drown his older brother in the bathtub after allegedly becoming ‘amped up’ about the war in Ukraine and coming to believe that her children would be taken away and abused by Vladimir Putin’s regime.

As she was being led out of the courtroom at the conclusion of the hearing, a visibly distressed Hitchcock turned to face her husband of 15 years, Jeff Hitchcock, and other relatives seated in the audience, and told them: ‘I’m so sorry. I love you guys. I don’t know what happened,’ reported WBAY2.

According to a criminal complaint obtained by Law & Crime, Hitchcock strangled her youngest son, Oliver, with her bare hands inside the family’s apartment in Sheboygan Falls on March 30. She also made apparent attempts to take her own life by overdosing on Tylenol and stabbing herself in the chest, but she survived.

When a police sergeant informed Hitchcock on April 1 that Oliver died of his injuries in the hospital, she was quoted as calmly saying: ‘well, I guess I accomplished what I set out to do then.’ 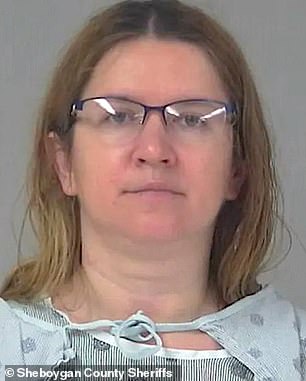 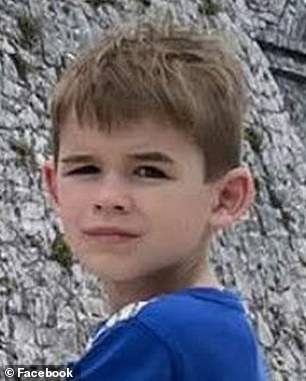 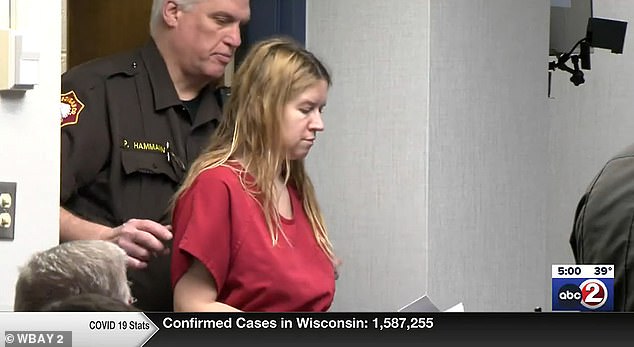 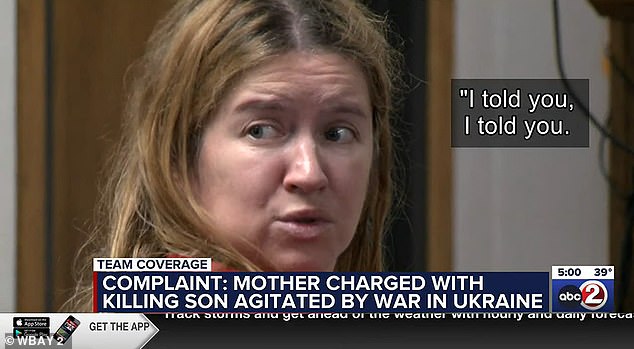 During the hearing, a seemingly distressed Hitchcock was seen turning to face her family members in the audience, among them her husband, Jeff Hitchcock 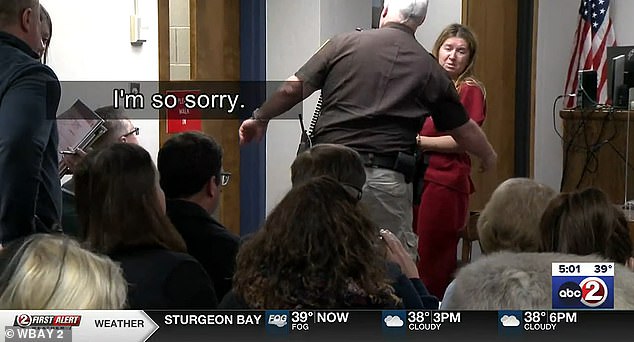 As she was being led away, an emotional Hitchcock told her loved ones: ‘I’m so sorry. I love you guys. I don’t know what happened’

The six-page complaint that was filed in Hitchcock’s case on Tuesday paints a vivid picture of the married mom-of-two’s apparent unraveling amid the ongoing Russian invasion of Ukraine, where her husband was born.

Hitchcock was said to be angry that she could not book plane tickets to visit her parents in Russia. She had recently started drinking vodka and experienced ‘surges of rage,’ according to her husband, who described his wife’s descent into apparent paranoia.

In the days leading up to the deadly rampage, Hitchcock reportedly asked her husband to buy survival gear, guns and knives, because she was afraid that their family would be attacked.

The tragedy began unfolding at 5pm on March 30, when officers with the Sheboygan Falls Police Department responded to the Hitchcock family’s apartment at 1110 Plank Trail Lane after receiving a 911 call from Jeff Hitchcock, telling a dispatcher that his wife had attacked their son and wanted to kill herself.

Responding cops found Oliver lying unresponsive with bruises around his neck and blood trickling from his nose and right ear, which are signs consistent with strangulation. 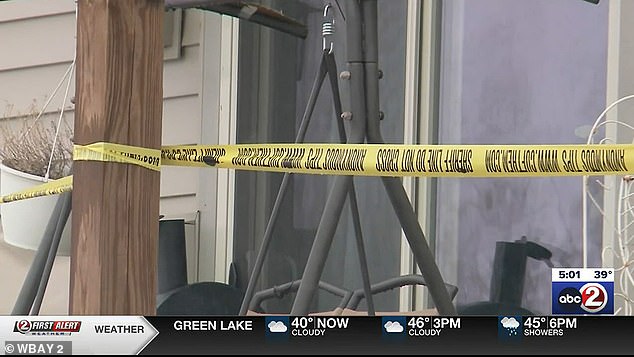 On March 30, police responded to the Hitchcock family’s apartment in Sheboygan Falls and found 8-year-old Oliver unresponsive with bruises around his neck 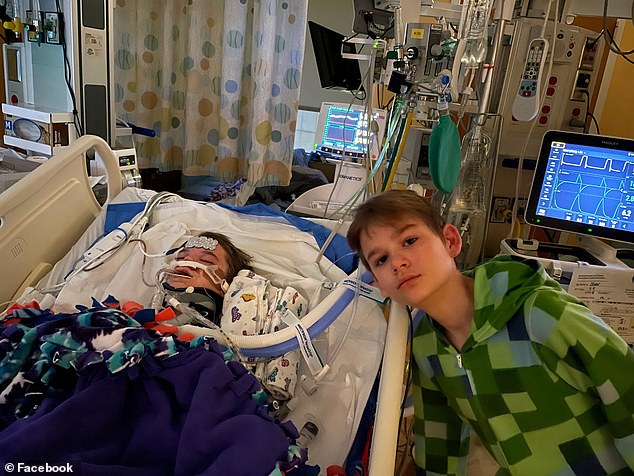 The boy died of his injuries two days later at Children’s Hospital in Milwaukee. His 11-year-old brother is seen above standing next to his sibling

Paramedics who were called to the scene performed CPR on the eight-year-old before transporting him to Saint Nicolas Hospital, from where he was later transferred to Children’s Hospital in Milwaukee.

Meanwhile in the apartment, Jeff Hitchcock led his wife out of the bedroom with a knife in hand and told police, ‘she tried to stab me.’ It was later revealed that Natalia also knifed herself in the chest in a failed attempt to ‘cut her heart,’ leaving her shirt soaked with blood.

The couple’s 11-year-old son was also in the apartment and told investigators that his mother had allegedly tried to drown him in the bathtub after challenging him to keep his head submerged underwater as long as he could.

‘He said that after he went under the water he felt his mother’s hands on his head, pushing him down and at some point it felt like her whole body was pushing him down,’ the son told the authorities, according to the complaint. ‘He said he was able to get out from underneath her so she had not been keeping him under the water. 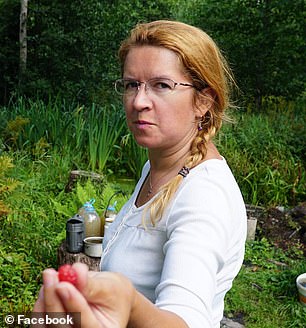 ‘He described the water as not having been very high and indicated that if it had been higher he probably would have drowned.’

It was Oliver’s older brother who found the eight-year-old strangled under a sheet in his bedroom on March 30 and alerted their father.

‘When he got closer to [Oliver] he saw what he described as red dots on his face and that his feet were white,’ the court document stated. ‘He said that he started screaming very loudly with [Jeff] entering and starting CPR.

‘He also said that his mother ended up in the kitchen with a different knife, which she held to her neck. At some point he exited the residence, ran and hid in the garage.’

According to the complaint, Jeff Hitchcock told investigators that he was worried for his wife’s state of mind as she watched the news coverage of the war in Ukraine.

He said that the mom-of-two, who previously rejected drugs and alcohol, had recently begun consuming vodka and ‘became violent when she was angry.’

Jeff told the cops that three or four days before the killing, she asked him to buy a camping stove and fuel, which he did ‘to make her feel safe.’ She also wanted to sotck up on guns and kives, ut her husband refused to comply with that request. 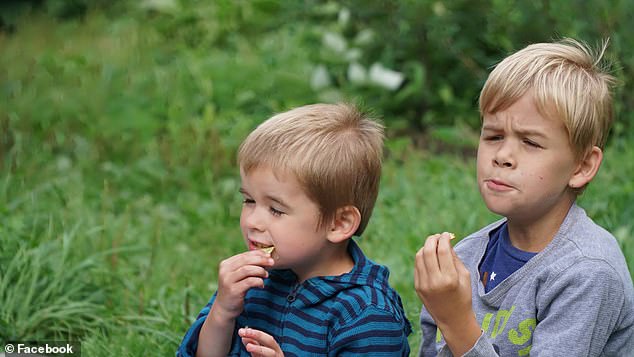 Hitchcock is also suspected of trying to drown her older son (right) in the bathtub, although she claimed she was only trying to scare him

‘He advised that Hitchcock also complained that she could not book a flight to Russia to see her parents, which made her angry,’ the complaint stated. ‘He said that he felt the war between Russia and Ukraine amped up Hitchcock more than ever and that she started to drink alcohol.’

Jeff Hitchcock told detectives that on March 30, he was taking a nap when his older son ran to him for help, screaming that his younger brother was ‘dead.’ His wife then came up to him and allegedly said, ‘I killed [Oliver].’

The husband said Natalia then began walking around the apartment with a knife, ‘dazed,’ and allegedly threatening to kill everyone in the house.

When questioned by a police officer, Natalia Hitchcock allegedly admitted to suffocating her youngest son to save him from being abused.

She also said that she did not have control of her thoughts, was hearing voices and had a ‘brain fog.’ She also recounted her she emptied a bottle of Tylenol into a glass of orange juice, waited for the pills to dissolve and drank the liquid to ‘fall asleep and never wake up.’

The 41-year-old allegedly said that as her husband was napping and her sons were playing video games, ‘she began to have thoughts that the Russian government was going to take her children and abuse them,’ according to the court filing.

Natalia also claimed that her husband ‘was trying to sell her and the boys to the dark web,’ she she decided to kill Oliver because he was ‘the youngest and most vulnerable.’ 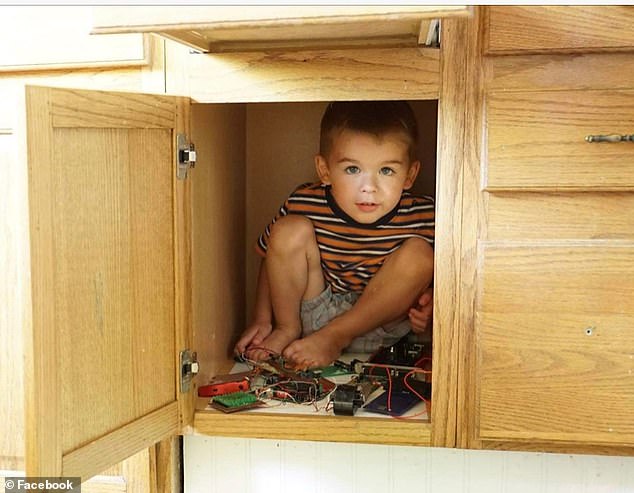 During interviews with police, Natalia offered various explanations for what happened, including that she feared that her ‘innocent’ son Oliver would be sold on the dark web and sexually abused

‘She said that she believed [Oliver] would not have been able to defend himself if he had gotten abused and she thought it better to kill him rather than watch him be abused,’ Natalia allegedly told the officer.

The mother then described how she ‘placed both hands around [son’s] neck and squeezed as hard as she could until [Oliver] stopped breathing,’ the complaint stated. ‘She said that she observed [Oliver’s] face lose color and that once he lost consciousness and fell to the floor, she grabbed a kitchen knife and began to stab herself in the chest.’

During a subsequent interview with a detective, Natalia downplayed the role of the stress caused by the war in Ukraine on her decision to kill her son, allegedly saying that she was ‘more worried that she was being sold by people on the dark web.’

The woman reiterated, according to the document, that she wished to end Oliver’s suffering with her own hands because he was ‘so little and so innocent.’

Hitchcock also said that she ‘had no other choice’ but to kill herself because she said people suspected her of being ‘a Russian spy.’

The woman, however, denied trying to kill her older son, telling police that she only dunked his head in the bathtub ‘to scare him so that he would understand his life was in danger.’

After she was told of Oliver’s death on April 1, Hitchcock ‘began to cry softly and said she did it because she was concerned that her son was going to be sexually assaulted and she felt he would be better off dead,’ stated the complaint.

Hitchcock has denied suffering from mental health issues want him to be abused. If convicted as charged, she could face life in prison. 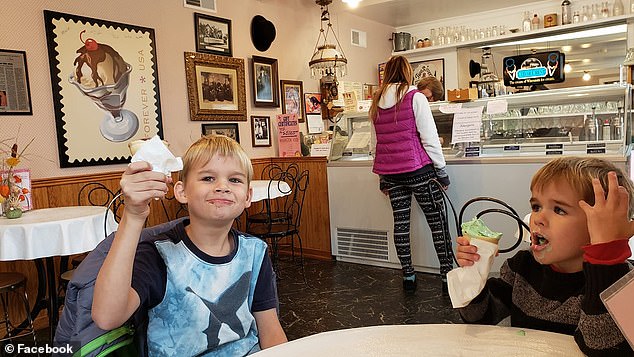 Meanwhile, Eric Hitchcock, Oliver’s uncle, has launched a GoFundMe campaign to help his brother, who works as a truck driver, care for his surviving son, now as a single parent.

‘No one should suffer at the hands of a parent – the person whose job it is to protect a child and keep him from harm,’ Eric Hitchcock wrote in the description. ‘With no history of aggression or abuse, we are left with nothing but questions as to why and how this could happen.’

The uncle also revealed that Oliver’s grieving dad has made the decision to donate his son’s organs to help save four other children.

‘My brother Jeff has always believed that his son Oliver was destined to do great things. Oliver, in his short life, has absolutely accomplished the extraordinary.

‘Most of us only get the chance to go through life once. Oliver will live on through his donations and our family will always be proud of Jeff for being able to reach beyond his grief and find the level of kindness in his heart to bring joy to others.’