Supermodel Irina Shayk is at the centre of a social media storm after she was accused of ‘backing Putin’s war’ by using his ‘Z’ symbol on Instagram.

She captioned a picture of a traditional Olivier salad with the phrase ‘Russianzz on Wednesday’, provoking outrage from Ukrainians and others who interpreted the spelling to be a reference to Russia’s war Z symbol.

The anger came a day after Putin’s forces fired a Kalibr missile at the busy city centre of Vinnytsia, killing 23 people including three children.

The story with the picture of the salad – a Russian specialty – vanished after 24 hours and Shayk, 36, has not commented on the hostile reaction. 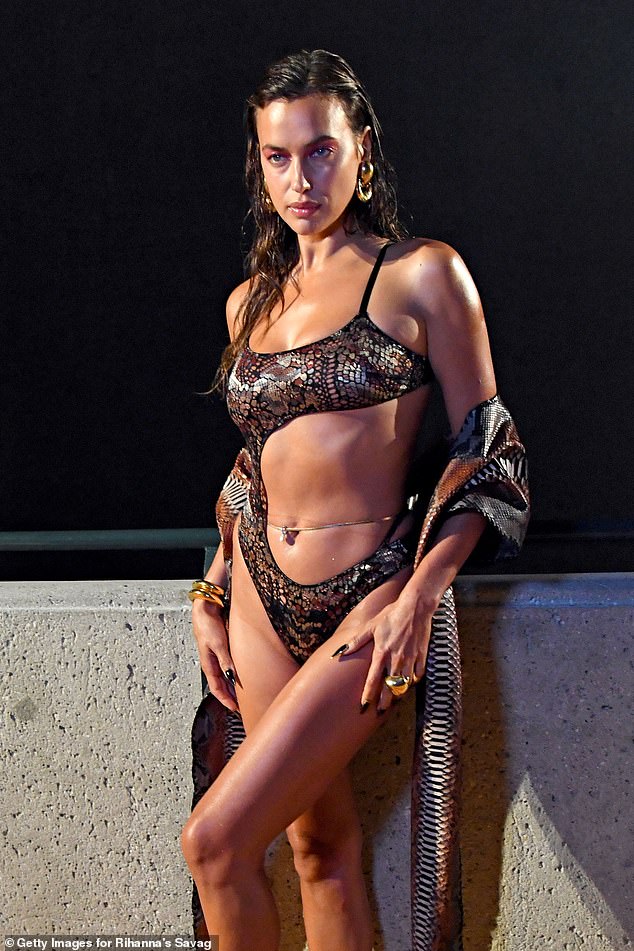 Supermodel Irina Shayk, 36, is at the centre of a social media storm after she is accused of ‘backing Putin’s war’ by using his ‘Z’ symbol on Instagram, posting a story with the caption ‘Russianzz on Wednaday(sic)’ 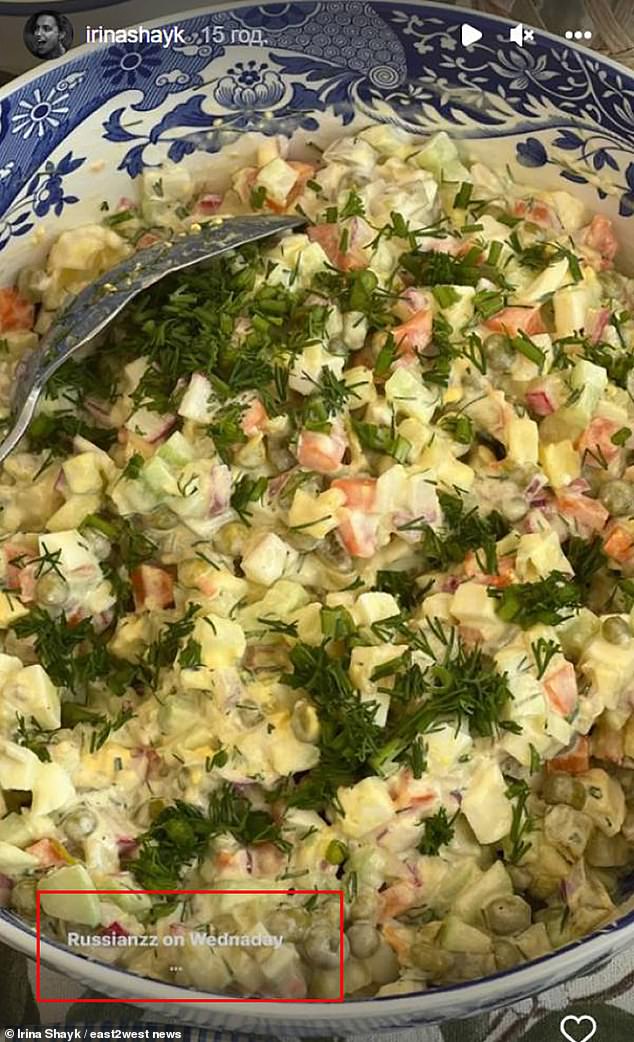 The story with the picture of the salad – a Russian specialty, which provoked outrage from Ukrainians and others, vanished after 24 hours and Shayk has not commented on the hostile reaction 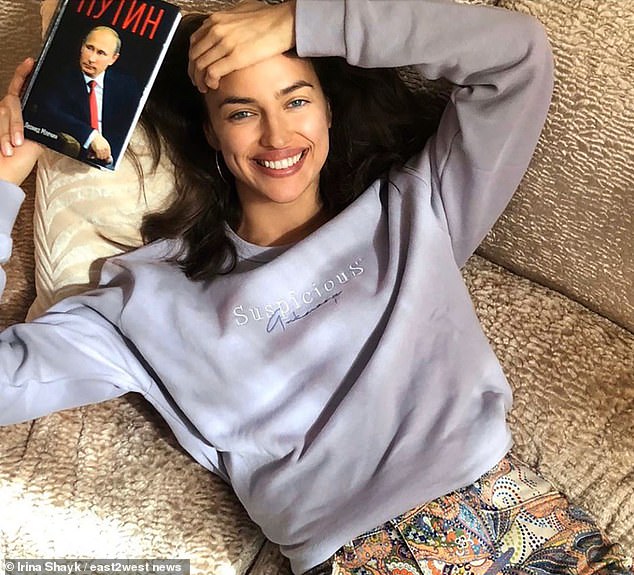 Netizens recalled her posing in April 2020 with a picture of Putin, an image that has also disappeared from her account

Ukrainian journalist Maria Romanenko called for sponsors to reconsider working with her over the post.

‘I really hope these brands reconsider working with her when Russia uses Z to kill Ukrainians.’

‘You must be banned in [the] civilized world while you support Russian terrorism against Ukrainian people! Stay in Russia forever and forget about USA and Europe – hypocrisy,’ wrote one critic.

‘I can’t imagine! How after all death caused by Russia you support them and write Z…’ posted another.

The Z-sign is seen by some as the equivalent of the swastika, and is widely used by Putin’s forces, as well as on pro-Russian propaganda.

Another hostile comment read: ‘Hopefully one day you will feel the same like people from Ukraine who lost their children.’ 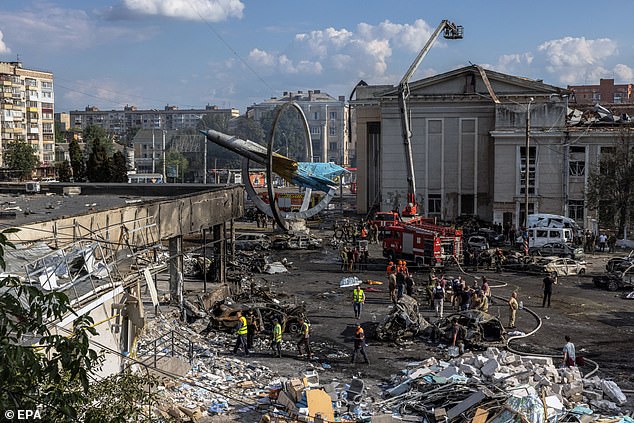 Firefighters together with rescuers, military and the police work at the site of the Russian missile strike in downtown Vinnytsia 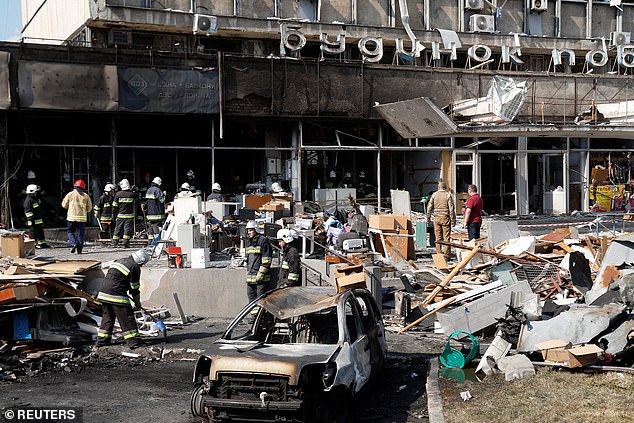 Emergency services work next to a damaged building at the site of a Russian military strike, as Russia’s attack on Ukraine continues, in Vinnytsia

Shayk was accused of being a ‘supporter of the terrorist state Ruzzia and genocide of Ukrainians.’

Another commenter branded her a ‘Putin supporter’ and asked: ‘@victoriassecret how does it feel to do collaborations with Russian fascist who supports Russia’s genocidal war against Ukraine?’

Many comments referred to the carnage at Vinnytsia, when Putin’s forces fired a Kalibr missile at the busy city centre yesterday, killing 23 including three children.

The missile launched from a submarine in the Black Sea crashed down on Vinnytsia at around 10.50am local time injuring at least 100 people.

Footage shows the moment of impact as cyclists and pedestrians were going about their day when suddenly the destructive power of the blast blows them off their bicycles while others cowered and dropped to the ground for safety. 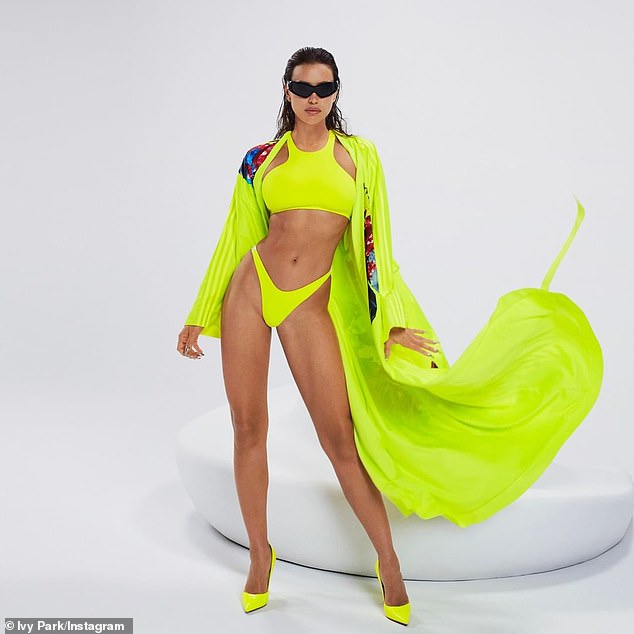 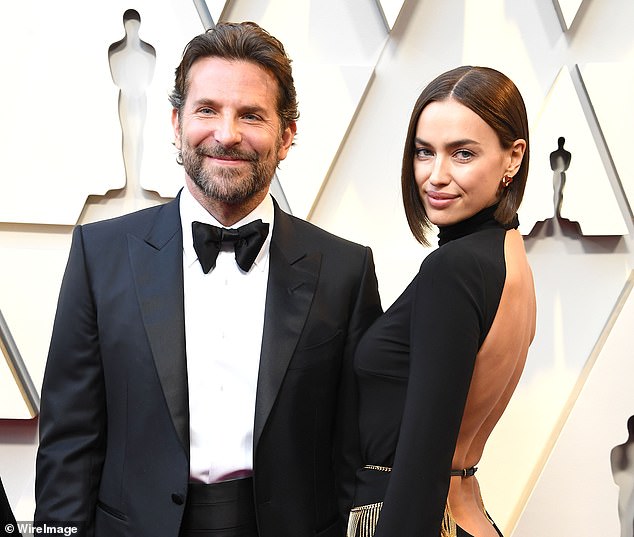 Irina is the ex-fiancée of Bradley Cooper (R, pictured May 2) after amicably ending their four-year relationship in 2019, pictured at the 91st Annual Academy Awards in 2019

Terrorised people are seen running to escape the strike unleashed on the city of 370,000 people in the centre of the country, far from the Donbas frontline.

One outraged commentator asked Shayk: ‘Did you see those photos from [the] Vinnytsia bombardment?

‘Did you see those small little bloody bodies of murdered by your Z-army kids, the age your daughter might be?

‘Are you proud of it, Ms. Shaykhlislamova?

‘I will never touch any brands that you promote, neither any of my friends will.

‘We should boycott any company working with this monster.’