Lagos State Governor Babajide Sanwo-Olu has vehemently denied that he has control over the military after the reported shootings at Lekki.

The governor made a statement at the press conference detailing the engagement rules for the Nigerian military. 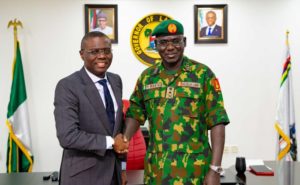 He said,  “No sitting governor controls the rules of engagement of the military.

“I have nonetheless instructed an investigation into the ordered and adopted rules of engagement employed by the officers and men of the Nigerian Army that were deployed to the Lekki toll gate last night.”