Seattle could be engulfed by 42-foot waves within three minutes of a 7.5-magnitude earthquake, a new model has predicted.

Researchers from Washington State Department of Natural Resources found that the city, home to 740,000 people, would see much of its downtown under water.

The 42-foot waves would be swirling around the landmark Seattle Great Wheel, and would reach inland as far as Lumen Field stadium, home of the Seattle Seahawks, and T-Mobile Park, where the Seattle Mariners baseball team play.

Thirty miles south of downtown, the port of Tacoma could see waves reach as far as three miles inland. 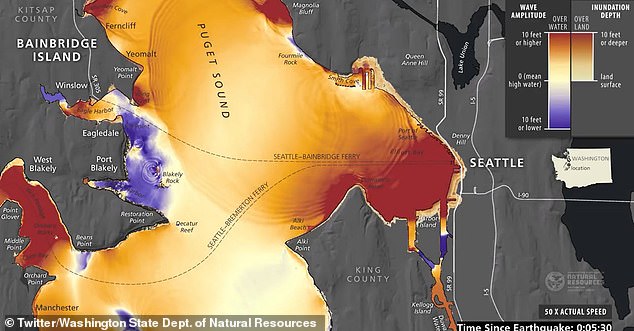 The Washington State Department of Natural Resources has produced a model showing what could happen if a 7.5-magnitude earthquake hits. Downtown Seattle is shown to the right, with the famous Seattle Great Wheel just below Denny Hill, right in the red zone five minutes after the quake. The iconic Space Needle is 10 blocks further inland, and its base would also be swamped 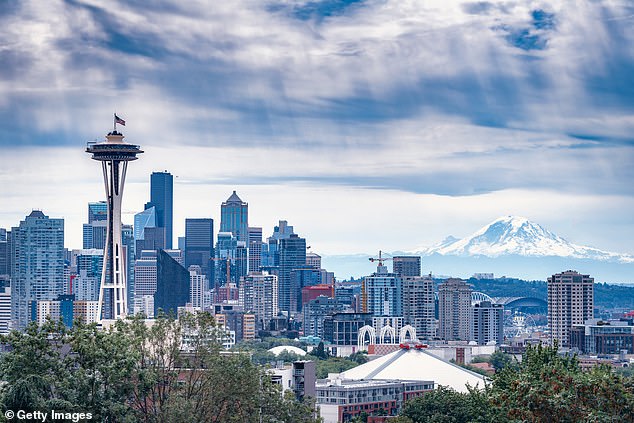 Much of Seattle’s downtown, including the wheel (pictured to the right, below the mountain) and up to the base of the Space Needle (left) would be underwater 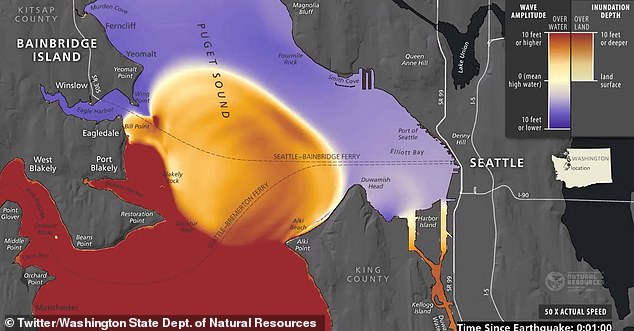 The purple area shows the water being sucked back, after the quake, before the tsunami roars in

Bruce Harrell, the mayor of Seattle, said the computerized models were valuable in planning for natural disasters.

‘Our highest responsibility as an administration is to keep our residents safe, and studies like this are a critical tool in that effort to analyze the data, understand risks and forecasts, and best prepare for future emergencies,’ he said.

‘We will continue to ensure our Office of Emergency Management – and all our departments – are best equipped to respond to emergencies and natural disasters, while we also strengthen our infrastructure and build a resilient city now and for the future.’ 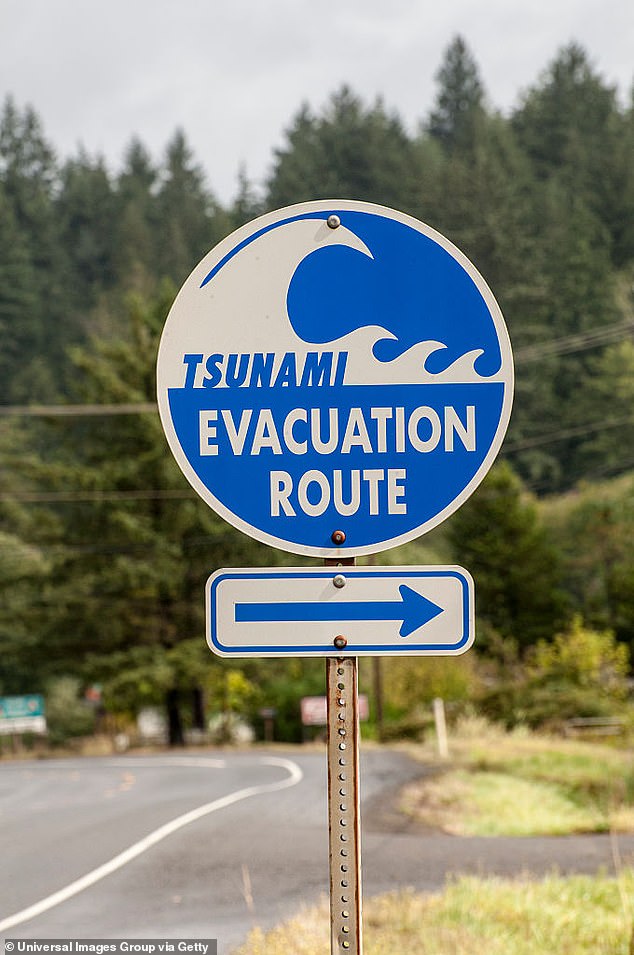 A tsunami evacuation sign is seen in Raymond, Washington 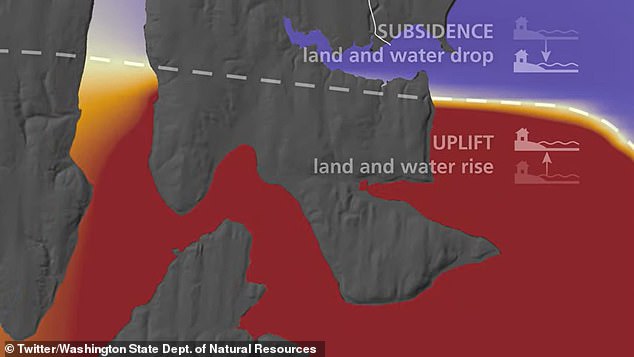 The earthquake would cause the purple-shaded area to drop, and the red-shaded site to rise 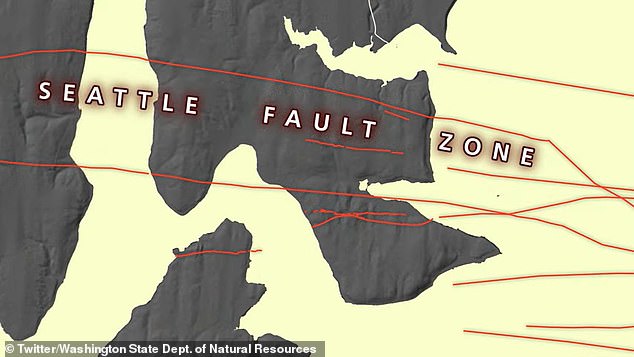 The fault is pictured cutting across Bainbridge Island and jutting towards the city of Seattle, which is slightly to the right of the map

Seattle sits along the Seattle fault – a series of multiple shallow east–west thrust faults, which cross the Puget Sound Lowland and pass through the city.

The fault is less dynamic than the Cascadia subduction zone, which runs for 700 miles from Cape Mendocino, California, through Oregon and Washington, and terminating around Vancouver Island, Canada.

It is also less well-known, and less studied, than California’s San Andreas fault – the longest in the world. It sits between the Pacific and North American plates, running more than 800 miles from the Salton Sea to Cape Mendocino. San Diego, Los Angeles and Big Sur are on the Pacific Plate, while San Francisco, Sacramento and the Sierra Nevada are on the North American Plate.

But it is capable of unleashing earthquakes with devastating force.

The last known earthquake on the Seattle fault occurred about 1,100 years ago.

However, geologic evidence shows five additional earthquakes of an estimated magnitude 6.5 occurred within the Seattle Fault zone during the last 3,500 years. 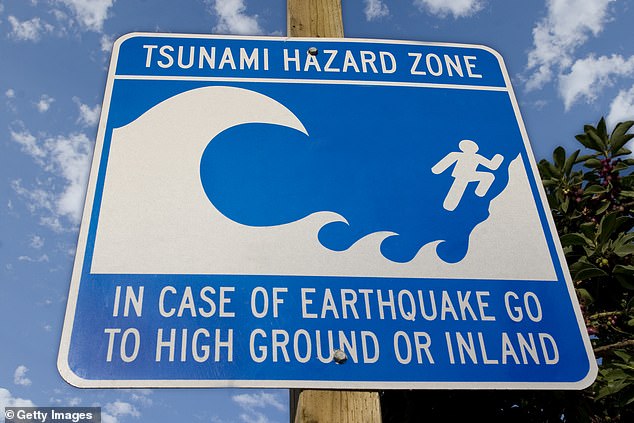 Hilary Franz, commissioner of public lands, said people should not be fooled by the Seattle fault’s comparative anonymity.

‘Most often, when we think of tsunamis, we think of our outer coast and communities along the Pacific Ocean,’ she said.

‘But there’s a long history of earthquakes on faults in the Puget Sound.

‘While the history of earthquakes and tsunamis along the Seattle Fault is less frequent than the Cascadia subduction zone, the impacts could be massive.

‘That’s why it’s critical these communities have the information they need to prepare and respond.’

‘Although the chances of this happening in our lifetime is low, it’s important for families to get prepared now,’ he said.

‘The ground shaking will be your warning that a tsunami may be on the way.

‘ Make sure you know where the closest high ground is and the quickest route to get there. Get signed up for tsunami and local alerts.’