See how the President of the USA will be elected today

The United States of America will be voting to either return incumbent Donald Trump of tbe Republican party or elect Joe Biden of the Democratic party in Tuesday’s presidential election.

However, in fact, the voting commenced several days ago and is also expected to continue for the next few days as absentee and mail-in votes are tallied even though by the end of today the winner is likely to emerge.

Strange? Not yet. In another twist to what is the presidential election of the world’s superpower, voters who go to the polls are not directly responsible for electing their President as this is the responsibility of the Electoral College.

An Electoral College or Collegial Election is an election where those who have been elected directly by the voters constitute themselves to elect important figures like the President and other principal officers.

The number of electors in each state is equal to the sum of the state’s membership in the Senate and House of Representatives. Currently, there are 100 senators and 435 state representatives. The seat of the federal government (namely, District of Columbia) is entitled to 3 electors so there are currently 538 electors to decide who becomes the next President.

Out of the 538 electors, the winner is expected to win at least 270 electors to emerge. 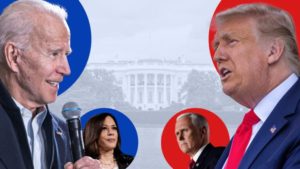 This means that winning today’s popular vote does not automatically translate into electoral college victory. Incumbent Donald Trump is the fourth American President to lose the popular vote but win his spurs against his opponent.

Trump’s vice-presidential candidate is Mike Pence who held the same position in their first term while Biden has picked Kamala Harris, who’s hoping to become the first African American and woman to be elected vice president.