The Socceroos are on their way to the World Cup with elated head coach Graham Arnold calling for Aussies to have the day off to celebrate as fans go wild following a dramatic penalty shootout victory.

Australia took the lead over Peru winning 5-4 in the shootout after a 0-0 score at the end of extra time, with reserve goalkeeper Andrew Redmayne the unlikely hero of the match.

Arnold had taken a huge gamble pulling Redmayne off the bench with just a minute to go, replacing captain Mat Ryan in goals – but his instincts clearly paid off.

The coach credited his team for their triumphs and cheekily suggested the new prime minister make today a national holiday.

‘No one knows what those boys have been through to get here. It was so hard, the whole campaign, and the way they’ve stuck at it and committed themselves to it, incredible,’ he said after the game in Qatar on Tuesday morning. 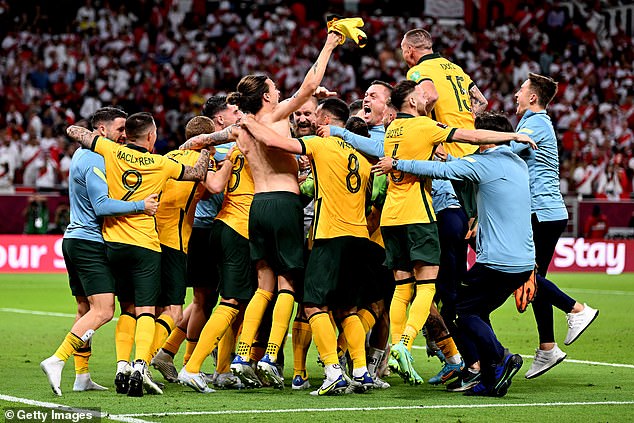 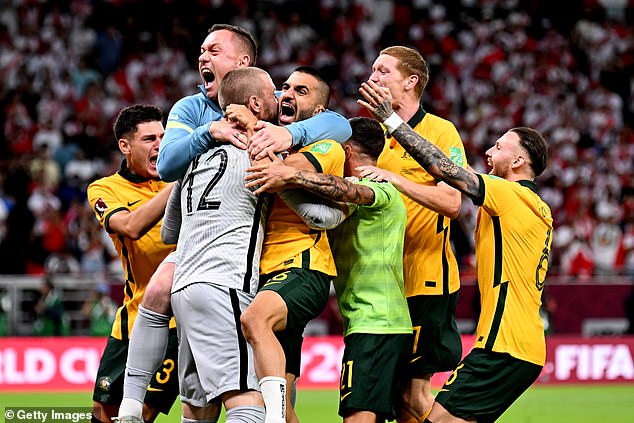 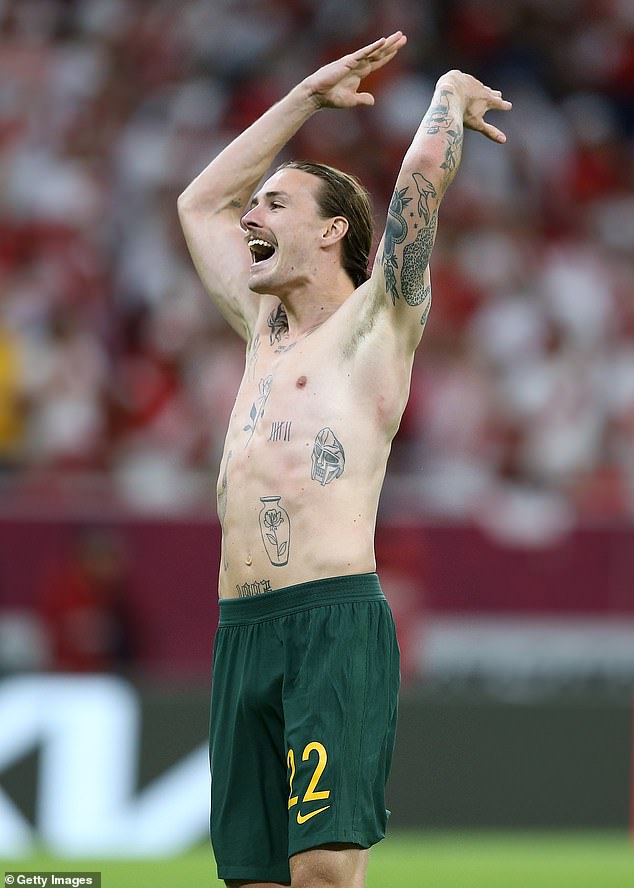 Goalkeeper Andrew Redmayne… Came off the bench for Australia in the final minute of extra time just for penalty shoot-out… He did this dance on the line every time… And for the critical penalty kick it worked! pic.twitter.com/hUb2g9Mevd

‘I called out Anthony Albanese the other day to give everyone a day off to celebrate this because I believe this is one of the greatest achievements ever.

‘To qualify for this World Cup the way we’ve had to go through things, 20 World Cup qualifiers, 16 away from home, it has been tough but we did it.’

‘Doubters eat your hats! We’re going to the world cup!’ she tweeted.

Former Socceroos goalkeeper Mark Bosnich told 2GB: ‘Absolutely brilliant… and well deserved as well, I thought they were the better team, too, over the whole 120 minutes.’

ABC News Breakfast sports presenter Tony Armstrong was seen joining in on the rowdy celebrations as he and a crowd of fans jumped up and down screaming. 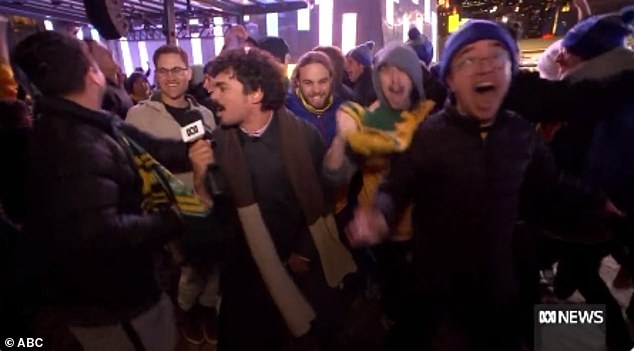 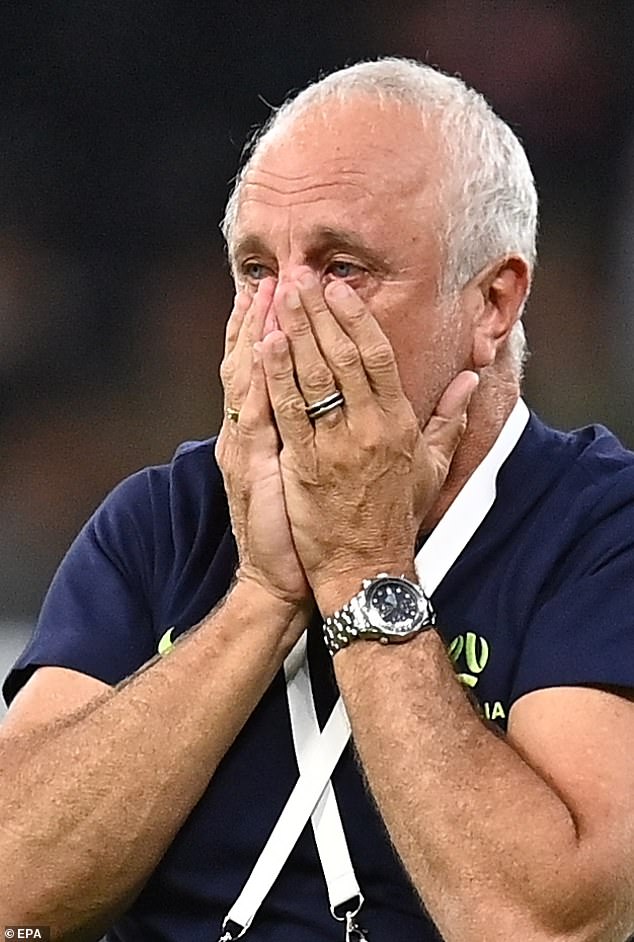 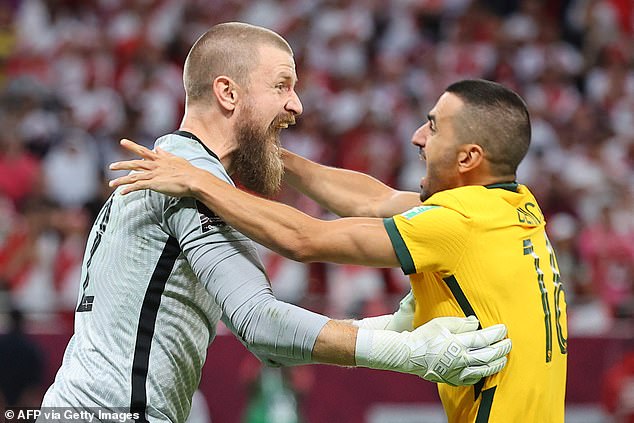 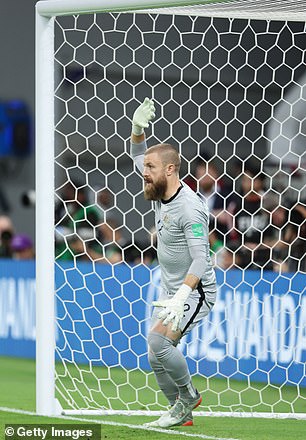 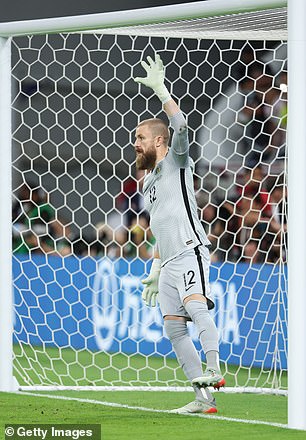 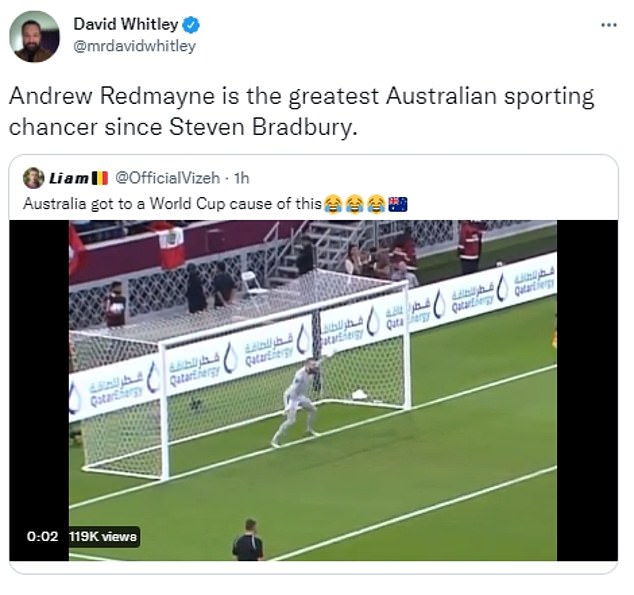 The Socceroos’ win on Tuesday will mean they will head into their fifth consecutive World Cup and sixth in total.

They will play in World Cup Group D with holders France, Denmark and Tunisia. The finals run from November 21-December 18.

Fans around the world shared their joy at Australia’s win, with many mystified by Redmayne’s bizarre antics in the goal.

The reserve goalie came off the bench for the final minute of extra time before the teams went to the shootout.

Before every shot he was seen psyching out the shooter, jumping from side to side and waving his arms and legs up and down, with many dubbing him the ‘dancing goalkeeper’. 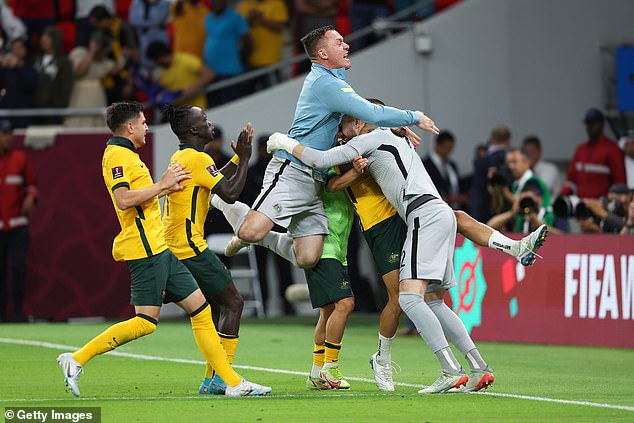 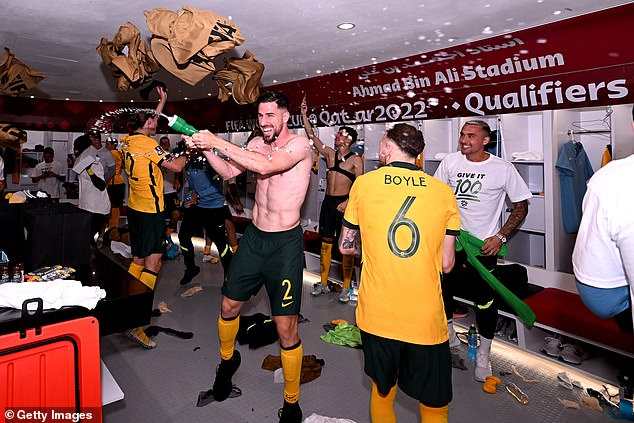 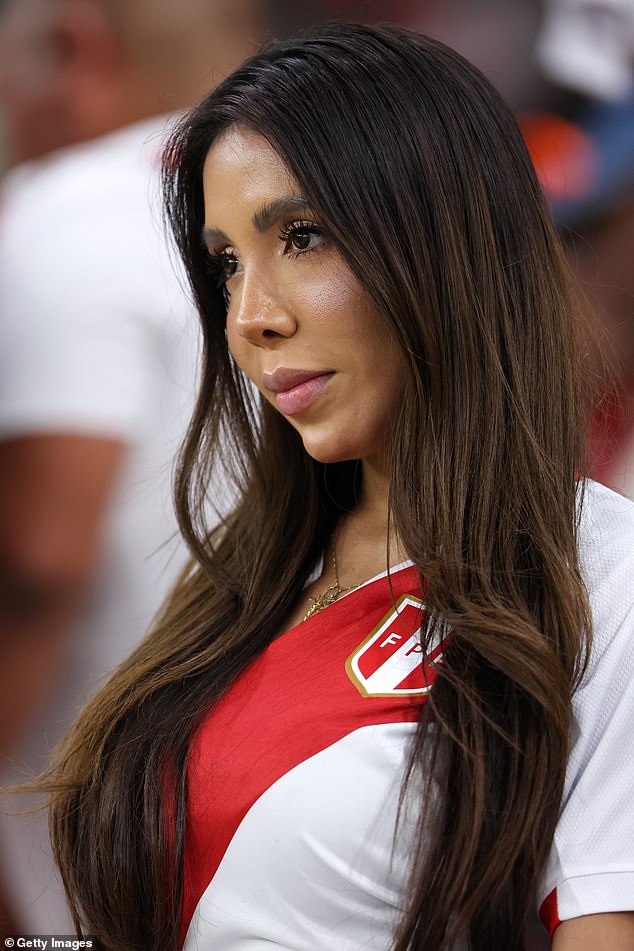 ‘Lord, give me the confidence of Andrew Redmayne who came on as a 120th min sub and danced Australia into the World Cup,’ one fan tweeted.

‘Never seen anything like this. Andrew Redmayne came on after extra time, proceeded to dance like Pinocchio before every pen, warned by ref each time, made the save to send Australia to World Cup,’ one tweet read.

‘I cannot believe Andrew Redmayne’s strategy of dancing before each shot actually worked,’ commented one.

‘Andrew Redmayne is the greatest Australian sporting chancer since Steven Bradbury,’ said another.

In his eyes, Redmayne insisted he wasn’t a hero. 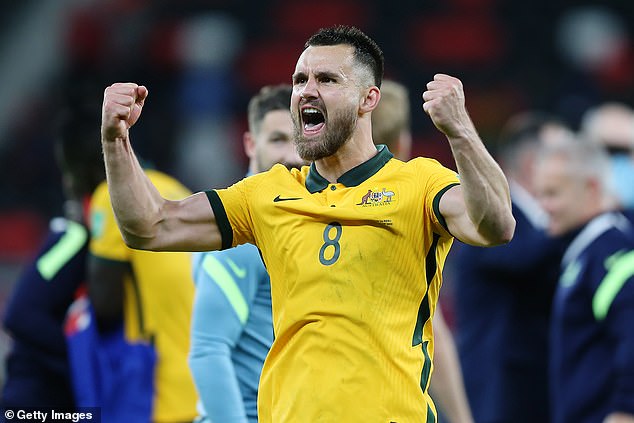 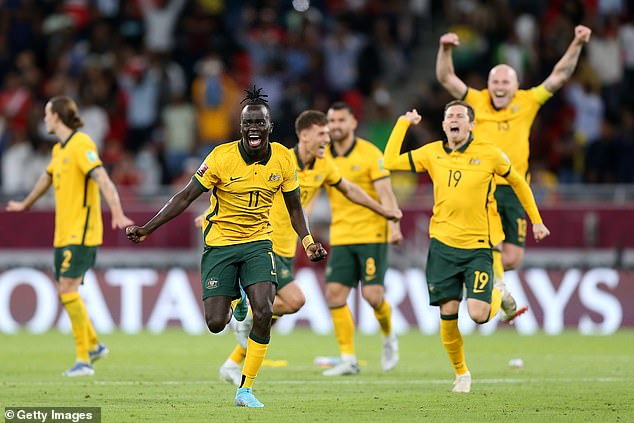 ‘The boys ran out there for 120 minutes. It’s a team effort. I’m not a hero. I just played my role like everyone else did tonight,’ he said.

‘This idea was floated pre-selection that this (shootout) might eventuate in these kinds of circumstances.

‘At the end of the day, it’s the flip of a coin. Either right or left.’

Redmayne has also earned the nickname ‘The Grey Wiggle’ for his dance routine in the net to put opposition players off their game during penalty strokes.

It was only months ago that Redmayne was fighting just to take his place in the net for Sydney FC.

In February this year, Redmayne was no sure thing to even be starting ‘keeper for Sydney FC after his absence for Socceroos duties and the scintillating form of understudy Thomas Heward-Belle.

‘To try and get him on the mental aspect while we were making that change, to add that bit of uncertainty in their (Peru’s) brains, that was, yeah, that is the reason,’ Arnold said.

After their loss on Tuesday, Peru coach Ricardo Gareca said: ‘We had the expectation to make it, we were close but unfortunately it was not the case.

‘We are flooded with pain. We gave our utmost. They emptied their tanks and we feel deceived we are out of the World Cup. We wanted to avoid the penalty shootout.’ 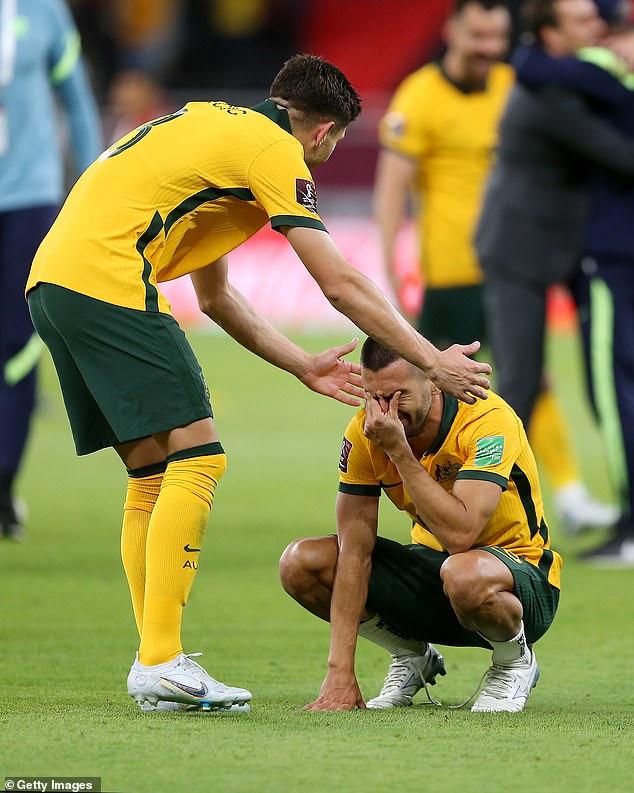 The Aussie team was overcome with emotion on Tuesday morning