Byron Bay’s beloved Splendour in the Grass has been smashed by torrential rain, turning the campground into a mud pit and forcing frustrated revellers to sleep in their cars.

The music festival in northern NSW begins on Friday but countless people made the journey on Thursday to the North Byron Parklands to set up their tents.

But due to the ground being completely sodden and a lack of staff, the majority of those driving through were forced to sit in their cars in the queue for up to 12 hours with no indication of whether they’d make it inside.

Organisers of the event have been blasted by attendees – who forked out $400 to go – and say they’ve been given no updates while they wait.

Multiple people said they were forced to sleep in their cars on the side of the road, as the mud made camping impossible. 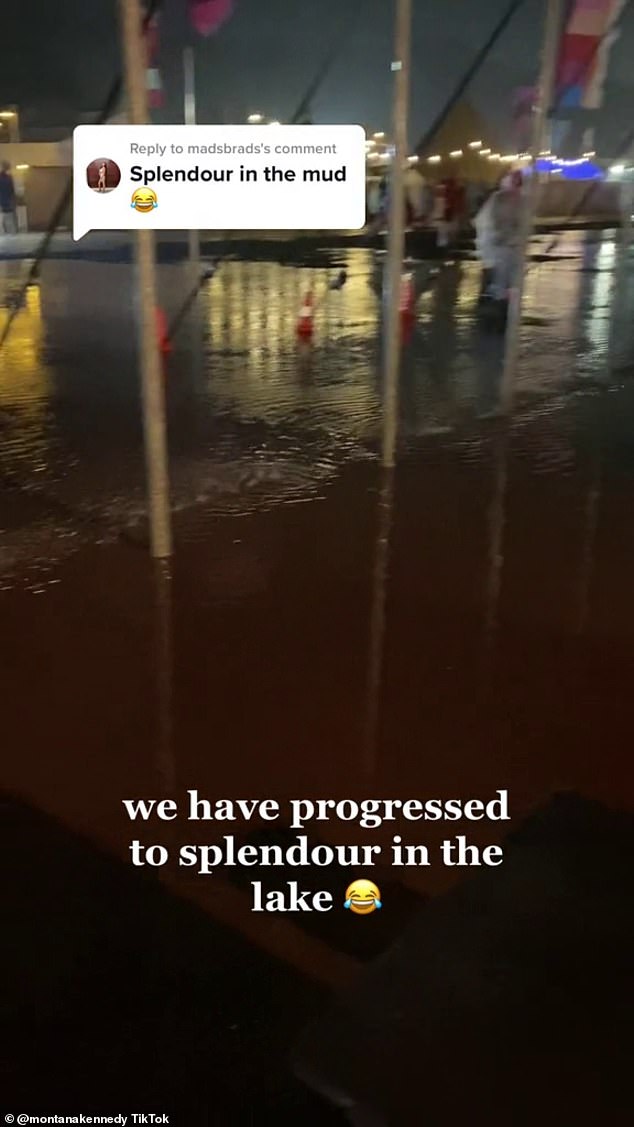 Byron Bay ‘s beloved Splendour in the Grass has been smashed by torrential rain, leaving the campground a mud pit and frustrated revellers forced to sleep in their cars 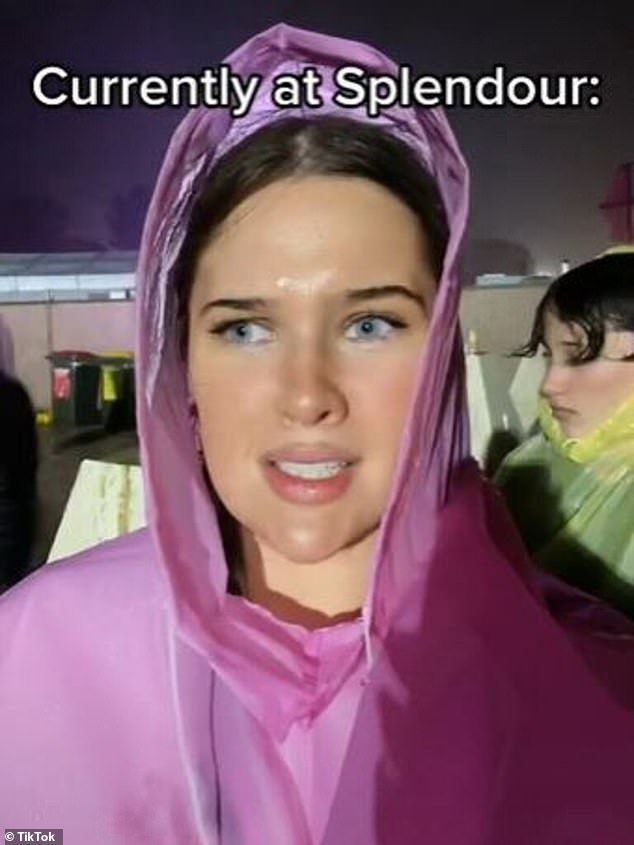 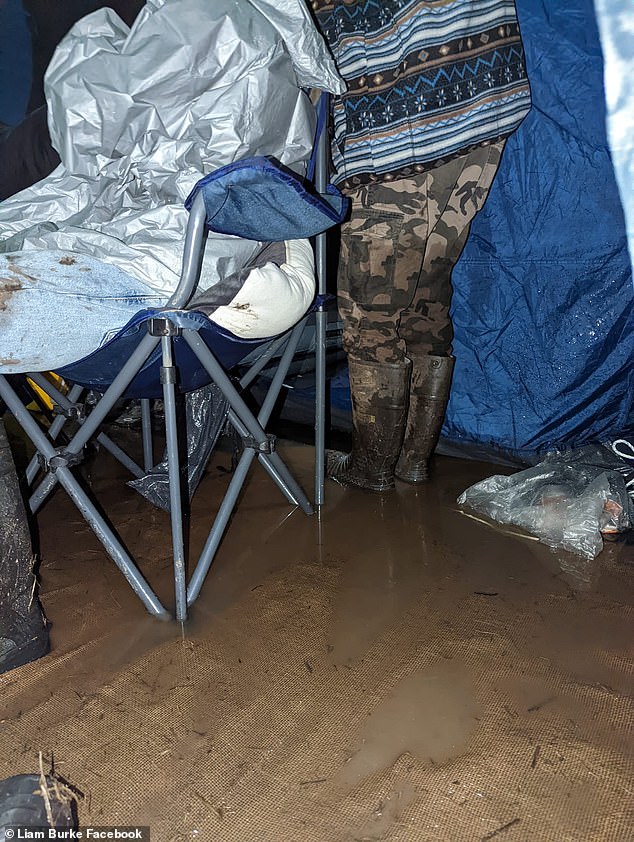 Others waited two hours for a bus to take them to the main festival grounds but when it finally arrived they were told the bus wasn’t running anymore.

Footage shared onto social media shows the grounds covered in thick mud, with those lucky enough to get inside filming their tents completely soaked.

While many have put on brave faces and are still trying to enjoy the festival, others have questioned why it was able to go ahead in the first place.

One festival-goer Steph told Daily Mail Australia she and her friends had driven down from the Gold Coast on Thursday only to sit in the queue heading into Splendour for nine hours. 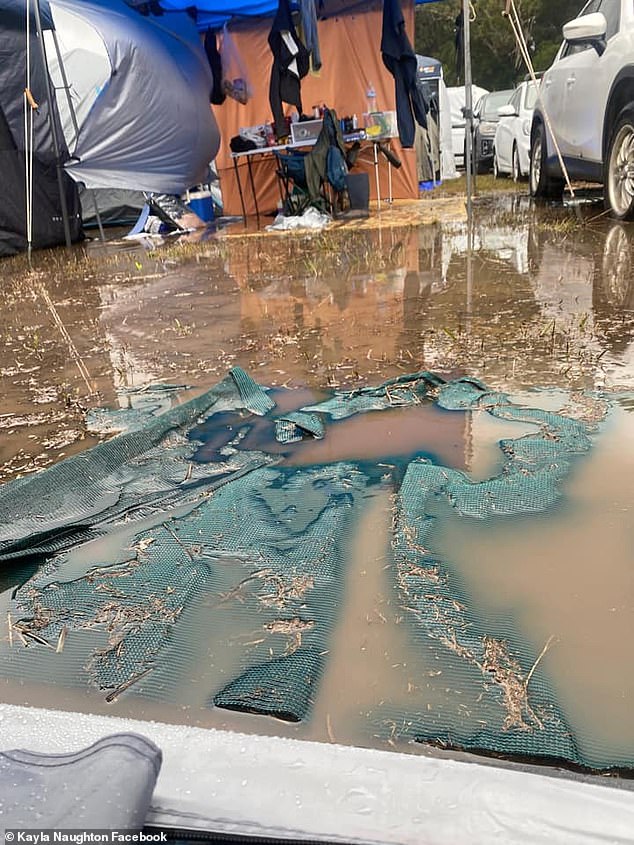 After waiting for three-and-a-half hours her car made it to the front gate but there was still no sign of getting in.

‘We asked another staff member what we should do and she said ”I don’t know” and that she was meant to finish hours ago but no one has told her anything,’ Steph said.

‘She was so cold and wet, she was clutching a hot water bottle and the volunteers and staff haven’t been offered any food. We offered one of the volunteers Pringle’s and honestly he was so happy.’

The group arrived in the queue at 3.30pm but by 1.30am they still had no updates from organisers about whether they’d make it inside to sent up their tents.

They eventually decided to drive back to the Gold Coast.

‘People are only hearing how bad it is through the Splendour in the Grass 2022 page set up by people attending the festival,’ Steph said.

‘No official communications other than their last story on Instagram and Facebook saying there’s delays and that the show will go on ”rain, hail or shine”.

Wandering up to the front of the queue, which was only 1.5km away, Steph said many punters had already chosen to spend the night sleeping in their cars.

She said she met another group who told her the campgrounds were flooded and nobody else could get inside.

‘The cops also said they have NO idea what’s going on and cannot help,’ she added.

A marquee was set up in the campgrounds for those who’d had their gear soaked.

‘I went over and this one girl was so drenched, she was shivering and clutching her things. Turns out her campsite got completely flooded and so the volunteers put her in this marquee with other flood affected people so it was a little flood evacuation centre,’ Steph said.

‘She said they just told her to wait until 9am, keeping in mind it was nearly 2am, because that’s the first shuttle that will take her back to her car.

‘Another girl had no shoes on because all her stuff got flooded and she was told she can’t get back to her car because it’s bogged. So she’s just so wet, lying in a soaked tent.’

Even the volunteers were looking to abandon the festival.

‘I asked this volunteer how we get out and she said ”you’re making the right decision, I wish I could come with you but we have all decided to stay and help where we can”,’ Steph said.

‘I spoke to the security guards on the way out and they were super concerned about people which was so nice. And the volunteers and staff were so lovely overall.

‘As we made it to the exit this one staff member asked what we would be doing and I said we were driving home and might catch a bus in tomorrow. She said that might not be an option because some of the shuttle buses took seven hours to get in!’

Steph and her mates have now given up on camping and will travel down from Palm Beach to Byron each day.

One volunteer had been working until 4am and said her next shift was due to begin at 8am. 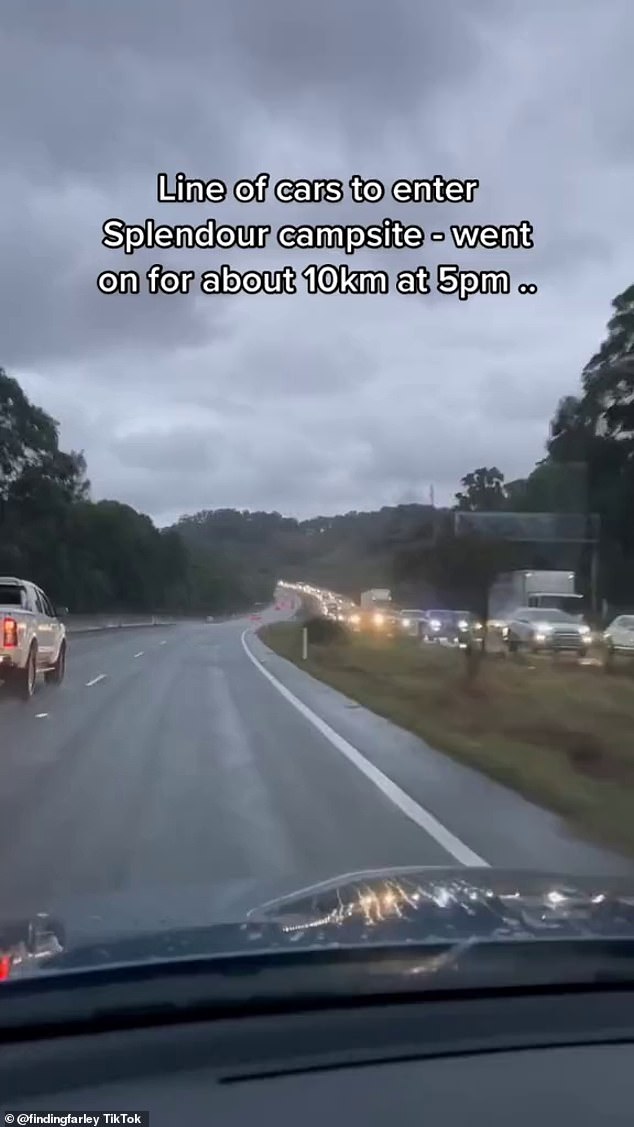 Organisers have said they are working to resolve the issues.

‘We are extending our campgrounds entry hours at NBP tonight so if you’re in the queue we will get you in. Please be patient – we hear you,’ the event wrote on its Facebook page late on Thursday night.

‘The weather and staff shortages were all worse than expected.

‘We are doing the best we can – the show will go on rain, hail or shine.’

But many pointed out the fact organisers had three years to hire staff, given the festival had been cancelled since 2020.

Others questioned why the event would even go ahead given the Northern Rivers had been ravaged by floods in recent months.

Locals have also felt the pain, with many saying a short trip has turned into a hours-long commute home from work.

‘Absolute joke! Months of flooding and heavy rain and you couldn’t plan for it? And not all staff are helpful, traffic control into the campground separated us in from our friends in the car ahead of us even though we told them we were together after 4 hours in traffic. Their response was ‘its a big festival you’ll see each other in there at some point’,’ one wrote on the Facebook page.

‘My friends have been in the car for 18 hours total, 9 hours in the queue to get in. Their friend had to be jump started and they’re almost out of fuel. What are they supposed to do? Park on the highway and camp there when their tanks are empty? No way in or out.. they can’t even drive off to a motel with no petrol and no way to leave the queue. This is a major safety issue! ‘ another said.

‘How do we leave the campsite we are parked on the campground roads and been told to sleep in our cars tonight. The festival has turned to s**t and should be cancelled. Ridiculous,’ a third wrote.

‘It’s not only festival attendees that are majorly pissed off. I’m a local that was trying to get home from a long day at work. Four effing hours in traffic for a journey that usually takes me 15 minutes,’ said a local.

The Bunnings Warehouse in Ballina has also reportedly sold out of gum boots.

Splendour in the Grass has been contacted for comment.