Jodie Comer is allegedly embroiled in yet another security scare as the same ‘odd’ fan who targeted her previously waited outside the Harold Pinter Theatre in London’s West End following her performance in Prima Facie last Saturday night.

It comes just weeks after the actress, 29, was whisked out of a separate door when a man exhibiting ‘worrying’ behaviour in a suit with flowers attempted to meet the star at her usual exit.

Now, he is thought to have returned to the spot – however onlookers soon recognised and pointed him out to the venue’s security staff. 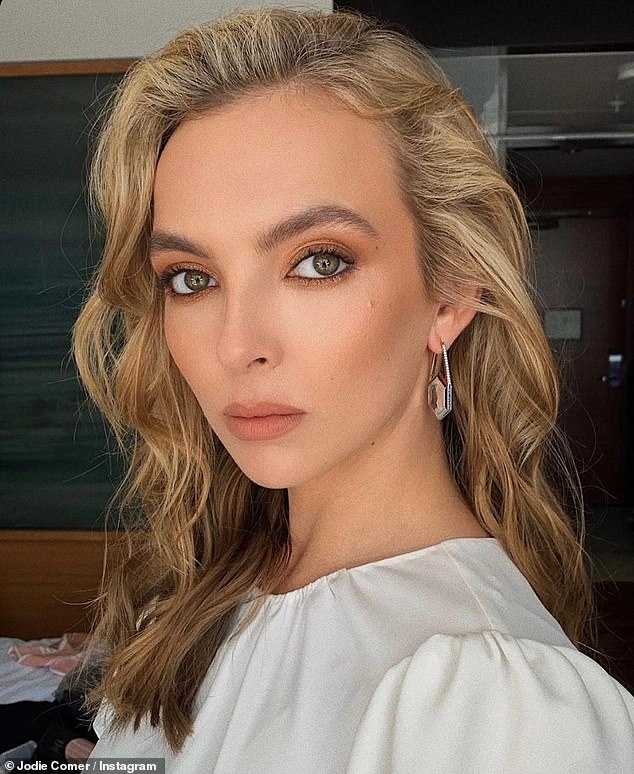 Scary! Jodie Comer is allegedly embroiled in ANOTHER security scare as the same ‘odd’ fan who targeted her previously waited outside her theatre after her West End performance

A source told The Sun: ‘He seemed to be trying to act casually but kept moving around. First he was across the road, then he moved to one side, and then another.’

They added that it appeared as though he was trying to avoid being noticed.

However, her ‘die hard’ fans alerted security who ‘identified him as the same man who had raised concerns before’, it has been claimed.

The onlooker continued: ‘That night, Jodie came out and got straight into her car. But some of her die-hard fans recognised him and pointed him out to security. 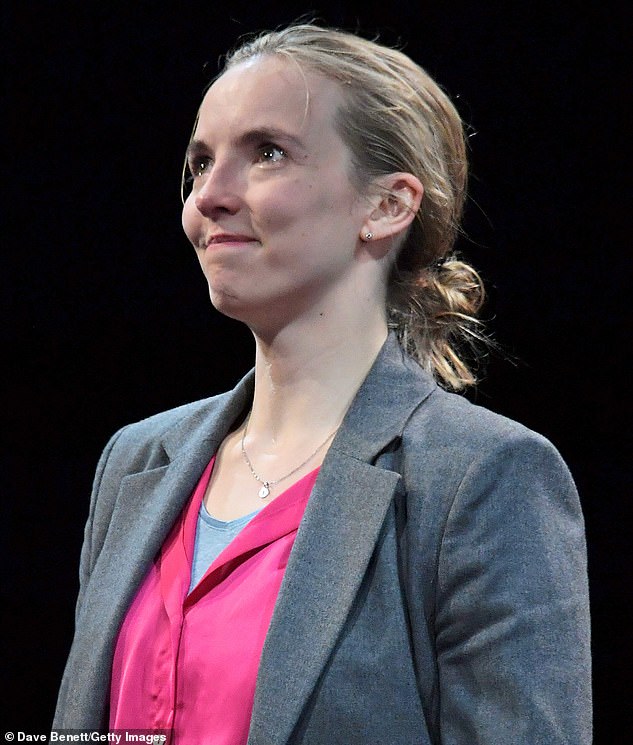 Oh dear: It comes just weeks after a man exhibiting ‘worrying’ behaviour in a suit with flowers attempted to meet the actress, 29, at her usual exit (pictured in-character in April 2022)

‘The staff registered their warning and told them that Jodie isn’t stopping to greet fans outside the stage door at the moment. They insisted that her safety is paramount.’

Representatives for Jodie and the Harold Pinter Theatre have been contacted for comment by MailOnline.

Theatregoers appeared to have taken a step back after Jodie has been mobbed by huge crowds outside the venue since her West End debut last month.

It comes after Jodie reportedly found herself at the centre of a security scare after a fan allegedly tried to get under a shutter to the stage door at the theatre of her play. 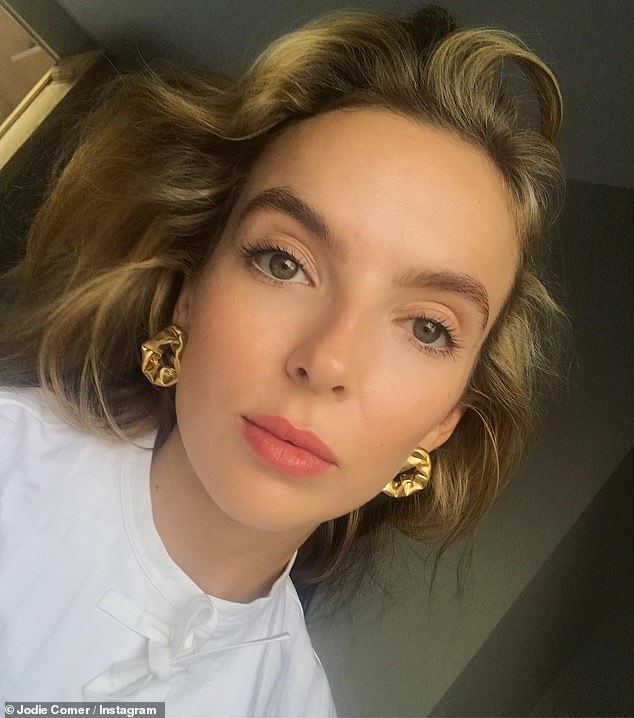 Phew! Now, he is thought to have returned to the spot – however onlookers soon recognised and pointed him out to the venue’s security staff

Her popularity has no doubt soared after picking up the Leading Actress gong for her role in Channel 4’s Help at this year’s BAFTA Television Awards, held at London’s Royal Festival Hall earlier this month.

Jodie, who won the category in 2019 for Killing Eve, admitted she was ‘very nervous’ as she took to the stage to receive her award for her outstanding performance in the pandemic drama.

The star, who looked stunning in a plunging tuxedo inspired gown which clung to her incredible figure, revealed how she directly messaged one of the show’s bosses hoping to work with them.

Accepting her award, Jodie said: ‘Hello! I’m so nervous! I want to say a huge thank you to Channel 4, I slid into the screenwriter’s DMs years ago to say I wanted to work with him. 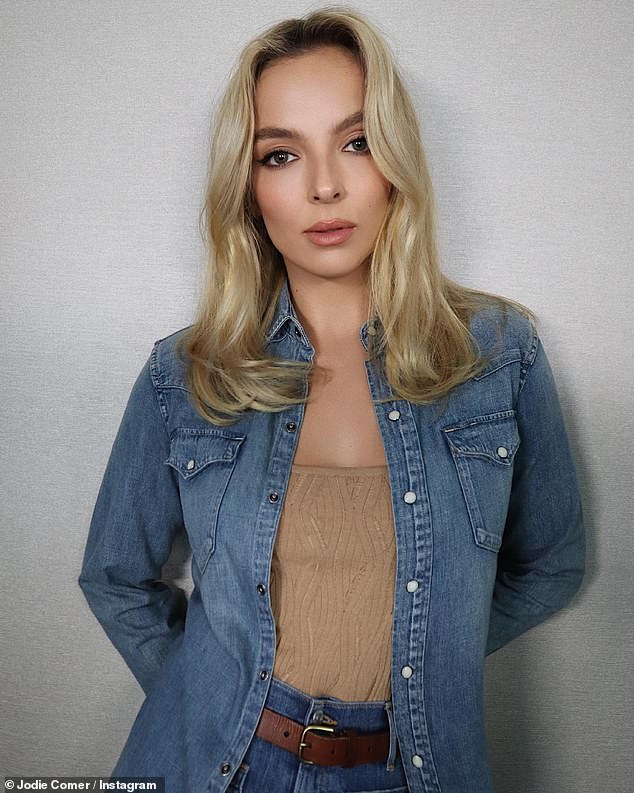 Oh dear: A source said: ‘He seemed to be trying to act casually but kept moving around. First he was across the road, then he moved to one side, and then another’

‘Thank you Stephen Graham who I’m gonna thank for the rest of my life. Thank you most of all to all the carers and to the people from the Dementia Society.

‘It was such a privilege to be a part of. And thank you mum!’

It comes after a fan allegedly tried to get under a shutter to the stage door at the theatre of her one-woman show Prima Facie.

Last month, it was reported that Jodie was whisked out of a separate door at the theatre after a man in a suit with flowers attempted to meet the star at her usual exit.

According to The Sun, the man was exhibiting ‘worrying’ behaviour to security staff and it was said at the time that Jodie would no longer be meeting fans outside the Harold Pinter Theatre ‘to protect Jodie as much as possible’. 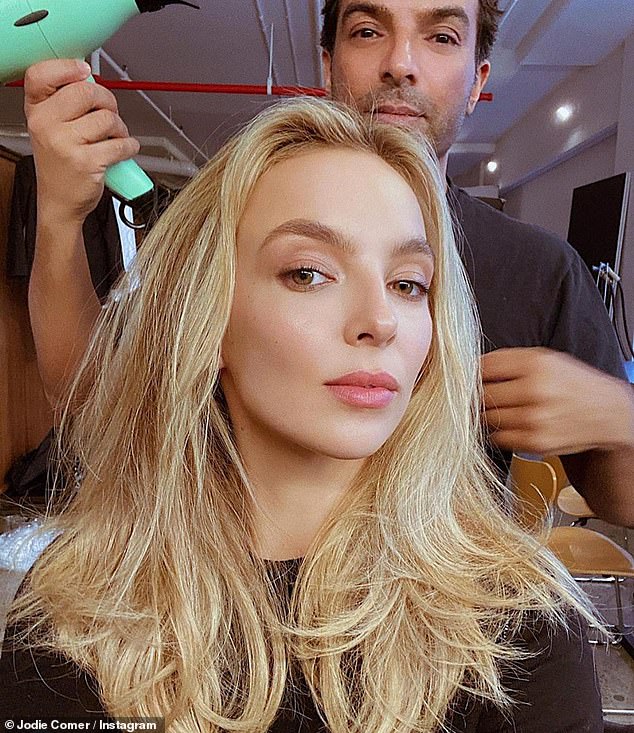 Thank god: However, her ‘die hard’ fans alerted security who ‘identified him as the same man who had raised concerns before’, it has been claimed

A fan told the publication: ‘The crowd was mostly young girls, so this man was very out of place. He claimed to be from Hungary, but he spoke with a French accent.

‘He was scrolling through images of Jodie on his phone. A few of the fans standing near him were worried by his behaviour, so they notified security staff.’

A source told MailOnline any security worries were settled after the CCTV was reviewed and said the curbing of fan meetings is to reduce the chance of Covid infection.

Elsewhere, Jodie was said to be left fearing for her life after a French stalker threatened to kill her, before a man was arrested by police in France last August.

There is no suggestion the man from last week’s alleged incident is the same person. 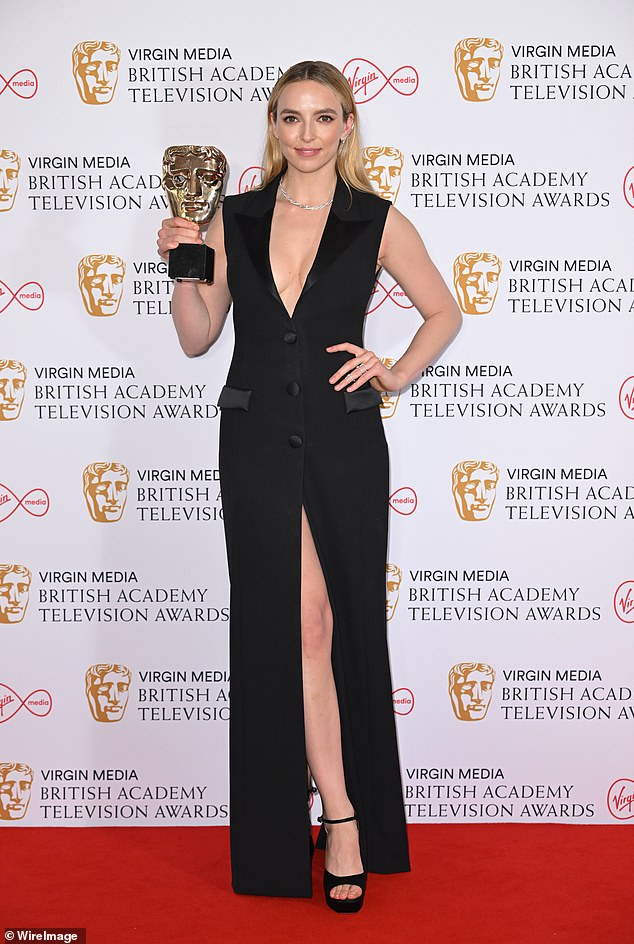 Concern: Theatregoers appeared to have taken a step back after Jodie has been mobbed by huge crowds outside the venue since her West End debut last month (pictured in May 2022)

Her character, who is described as ‘thoroughbred’, vilifies the victims until she is sexually assaulted and forced to go up against the system she had taken advantage of during her career.

He wrote: ‘Comer blows us away in a ferocious yet forensic performance that’s related in a blizzard of quickly shifting perspectives.

‘She gets us onside as the high-flying barrister with her native Liverpool accent and anti-Establishment attitude – at one point tossing rubbish into the audience. 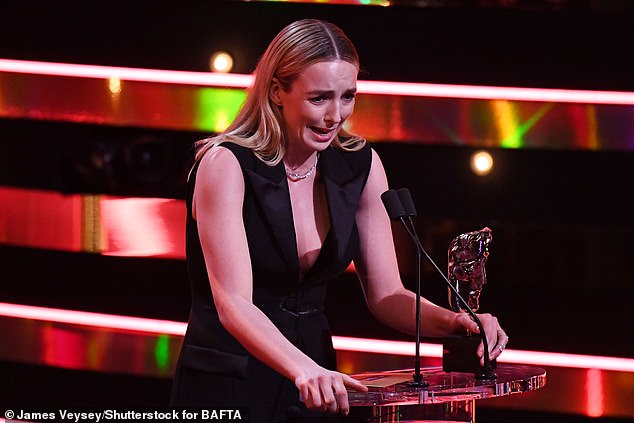 What?! It comes after a fan allegedly tried to get under a shutter to the stage door at the theatre of her play (pictured in May 2022)

‘But her abrupt disintegration into fevered, ashen-faced confusion is seriously distressing. Although her performance runs a stunning gamut from cocky joy to despair and humiliation, it’s the subject matter that dominates the evening.’

There are already rumours that Prima Facie could head to Broadway. The play will run at the Harold Pinter Theatre until June 18.

James Bierman, the play’s producer and general manager, told Deadline Prima Facie has the ‘potential to be something’ and revealed that he and the production would like to transfer to New York.

James added that Jodie would also like to take the play to her hometown of Liverpool.

He said: ‘It would be amazing to take it to Liverpool, schedules permitting, and Broadway deserves to see the piece.’

James added that the play ‘feels like it can be a really powerful agent’ when discussing how sexual assault victims are treated by the police and the courts.

‘Every eight minutes a woman reports a rape in the UK,’ he said, before pointing to the fact that just a fraction of those cases end up in a court.

Once Jodie was cast as Tessa, a decision was made to give the character a working-class Liverpudlian voice.

Prima Facie – What is the verdict?

Arifa Akbar writes: ‘Jodie Comer’s West End stage debut is a baptism of fire by any standards. A one-woman play about a lawyer who specialises in defending men accused of sexual assault, until she is assaulted herself, it demands frenetic, non-stop physical and emotional engagement from its lead.’

‘Her performance, running a full-pelt 100 minutes, propels her into the front rank of stage stars.

‘It has to be said that the 29-year-old Liverpudlian has seemed incapable of putting a foot wrong when it comes to career moves.’

Baz Bamigboye writes: ‘What a truly stunning debut it is. Comer is phenomenal and commands the stage.

‘Comer, 29, gives a fearless, faultless performance as Tessa, a criminal barrister who specialise at defending rapists.’ 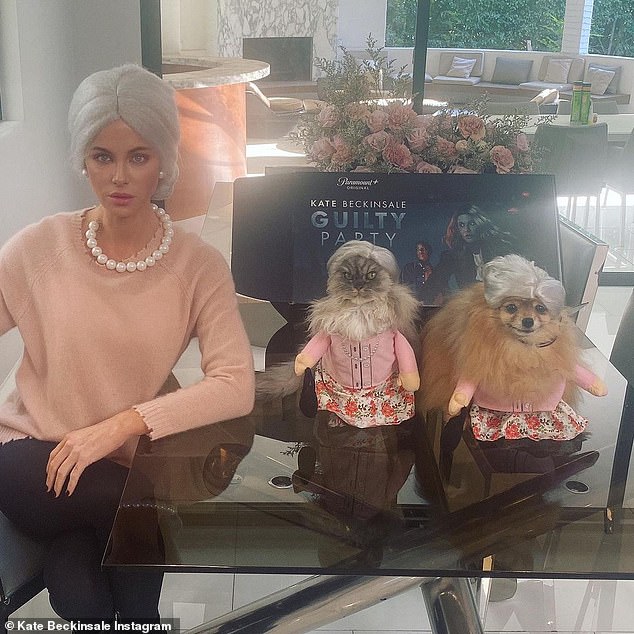 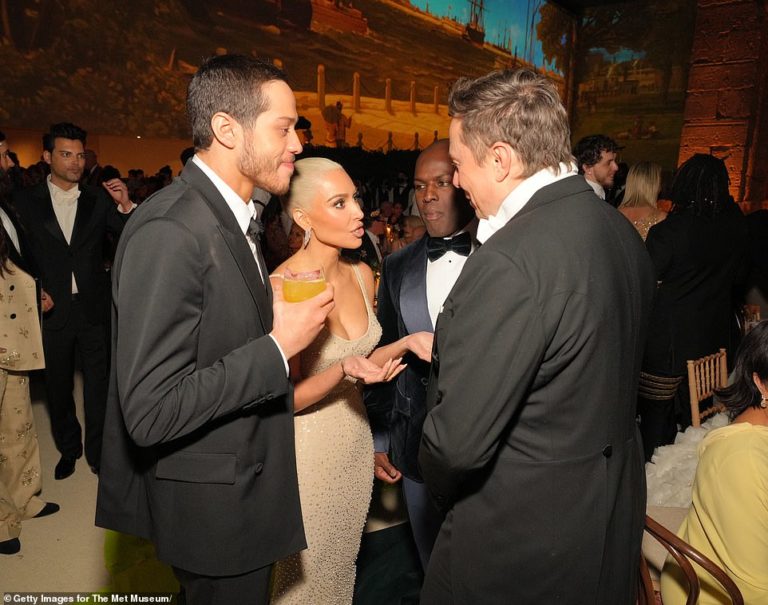 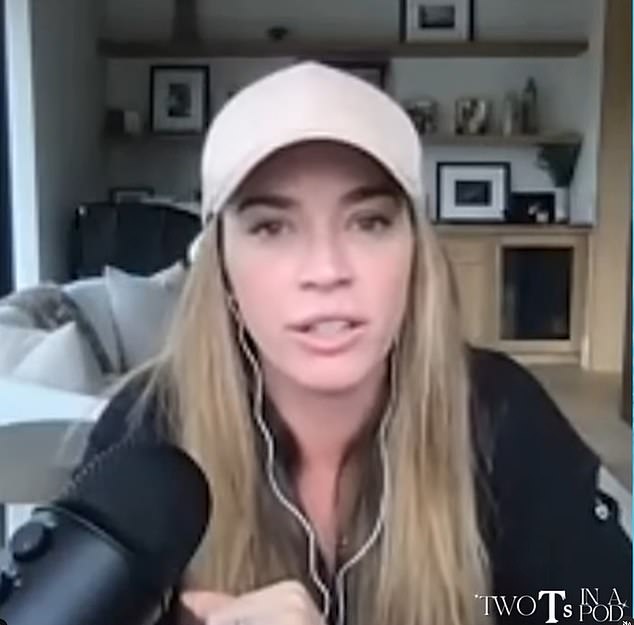 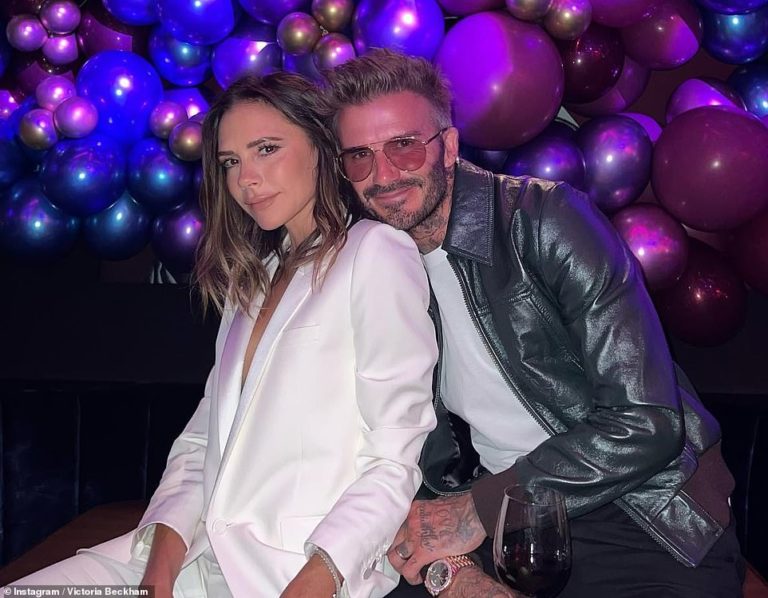 Advertisement Victoria Beckham celebrated her 48th birthday with a lavish celebration at a swanky sushi restaurant in Miami, which she shared with her fans on Instagram on Monday. The designer donned a stylish white suit from her own range for the party which she attended with husband David, their sons Romeo, 19, and Cruz, 17,… 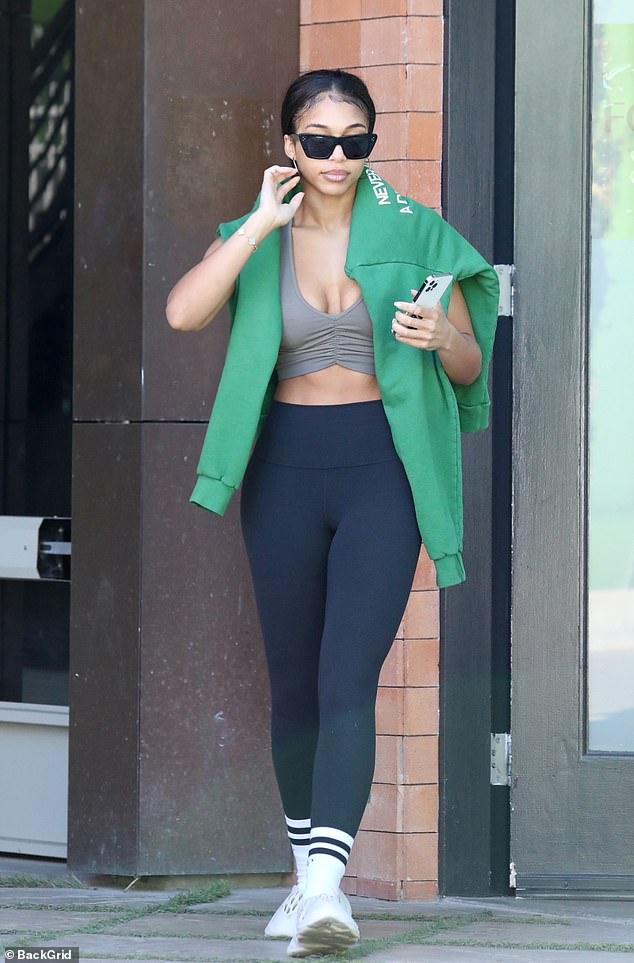 Advertisement She’s focused on her fitness. And Lori Harvey simply glistened while leaving another grueling Pilates session on Saturday morning in West Hollywood.  The 24-year-old model showed off her hourglass curves as she stepped out in a brown sports bra with black leggings after professing her love for boyfriend Michael B. Jordan on social media…