An Oregon woman is facing a long road to recovery after being stabbed 11 times with a kitchen knife in front of her apartment by a stranger who was out on parole, in what police have described as a chilling random attack.

Lauren Carrier, 30, can now only walk with the assistance of a cane and is unable to move her arm.

The incident began when Bryan Aguilera, 27, showed up to her apartment in Beaverton – just outside of Portland – on March 3 looking for someone named Jasmine.

She told him he had the wrong place – but he returned the next evening for some reason, setting off alarm bells for Carrier.

‘I only opened the door, a small crack, and he began to punch me and stab me. And that’s when I knew that I needed to fight, because he was pushing me away from the front door,’ Carrier told local station KOMO.

Carrier, who has a 9-year-old daughter that wasn’t home at the time, grabbed a bat to fight off her attacker and started screaming for help, according to the outlet. Her neighbors came to the rescue, with one pinning Aguilera down until police arrived.

Aguilera was on parole at the time of the March 4 incident, according to court records.

He’s being held at Washington County jail on $25,000 bail as of Sunday afternoon on charges of attempted murder, first degree assault, burglary, two counts of third degree theft and four counts of unlawful use of a weapon.

Carrier is recovering at home and walking with a cane. She says she can’t move her right arm anymore as a result of the brutal knife attack. 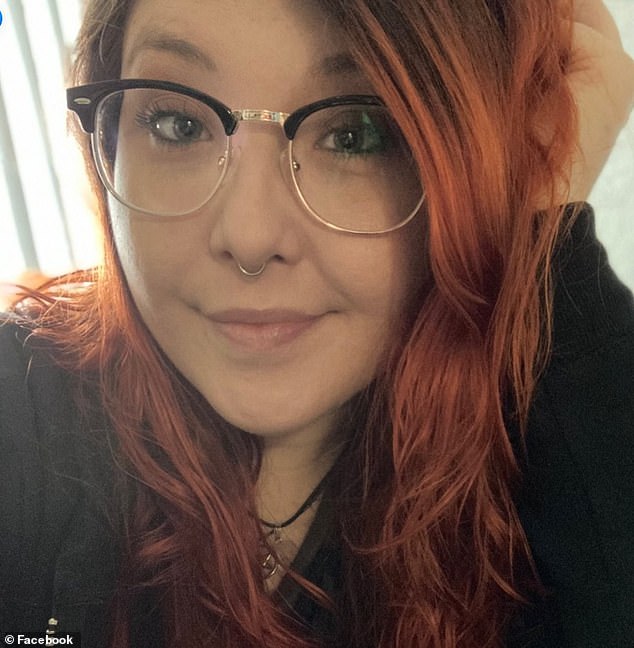 Lauren Carrier, 30, was in her Beaverton, Oregon apartment on March 4 when a random man knocked on the door and brutally stabbed her 11 times in a random attack 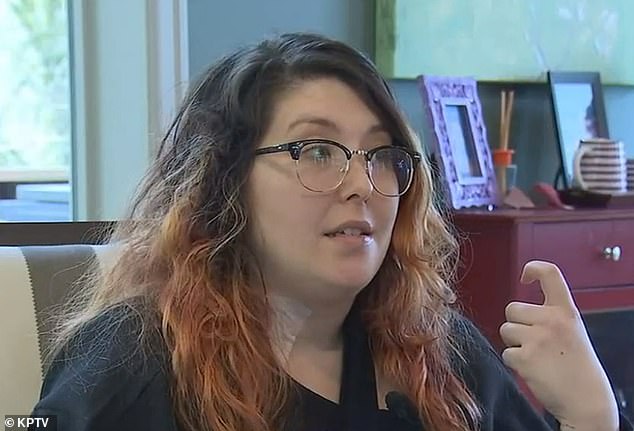 Carrier, who has a 9-year-old daughter, grabbed a bat to defend herself as her neighbors helped her and eventually chased down the suspect, 27-year-old Bryan Aguilera 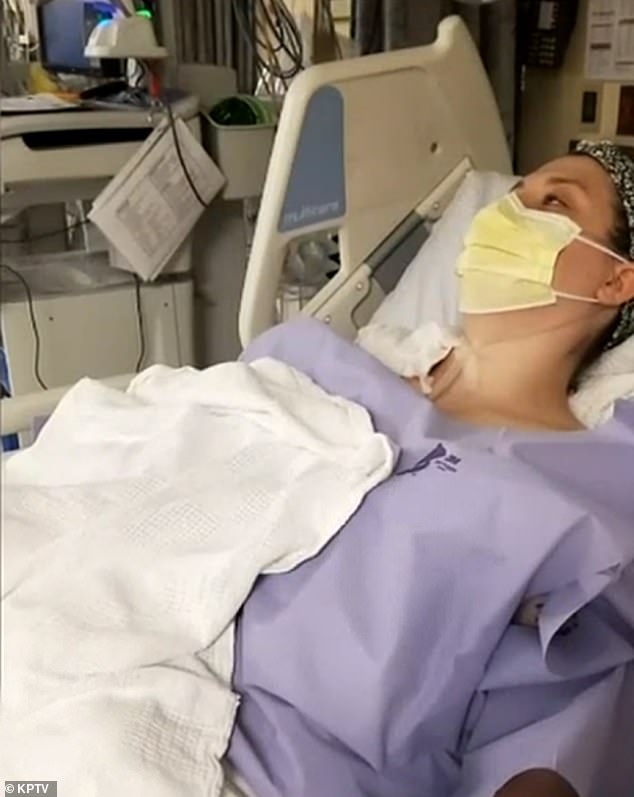 She hospitalized with a broken rib, punctured lungs and severed nerves in her right arm and is now recovering at home

The Beaverton Police Department did not immediately respond to requests for comment from DailyMail.com.

Aguilera is from Woodburn, about 28 mi south of Beaverton, according to the Beaverton Valley Times.

Police said he stabbed Carrier repeatedly from the other side of her front door.

‘He began just punching me and all of a sudden grabbed a seven-inch kitchen knife and began stabbing and trying to push me into my living room, and I knew that if I didn’t get out of my apartment I was going to die,’ she told KPTV.

She grabbed a bat to fight him off, adding that her dad always taught her to keep one by the door in case she had to defend herself.

‘I was thinking in my head, like, “My mom. Somebody needs to tell my mom.” Because I just thought I was gonna die,’ she told KOMO.

‘My neighbors were amazing,’ Carrier said. ‘They got towels; they made them into tourniquets, called 911. My attacker ran away, and two other neighbors ran after him, tackled him, and held him until police arrived.’ 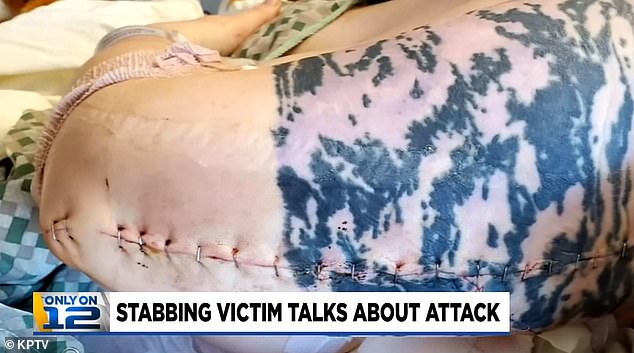 Carrier said: ‘He severed the nerves in my arm; I can’t move my arm anymore’ 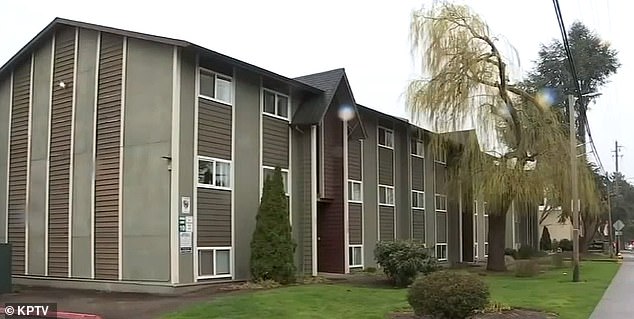 The stabbing happened on the evening of March 4 at her Beaverton apartment complex, just outside of Portland 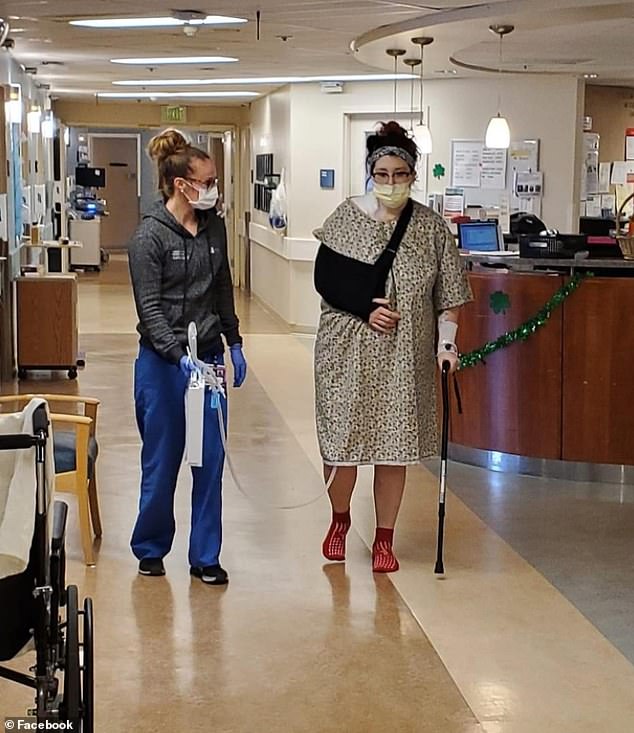 In an update on Facebook on March 18, Carrier said: ‘I’m back home and feeling so full of love and support. Im ready for this new journey. I’m already starting to take a few steps without my cane, getting up and down the stairs (with assistance) and can tie my shoes one handed!’

She was hospitalized with a broken rib, punctured lungs and severed nerves in her right arm.

A GoFundMe fundraiser posted on her behalf has raised almost $16,000 since March 6.

‘She sustained two punctured lungs, broken ribs, and cannot feel or use her right arm,’ the description reads.

‘Lauren has a long road to recovery, physically and mentally. She will not be able to work for the foreseeable future, and she is a single parent. Thankfully, Lauren’s child was not home at the time of the attack. Lauren’s amazing family will be able to house her, but she will need financial assistance to meet basic needs while she is healing.’

On March 18, Carrier posted an update on her recovery on Facebook.

‘I’m back home and feeling so full of love and support. Im ready for this new journey. I’m already starting to take a few steps without my cane, getting up and down the stairs (with assistance) and can tie my shoes one handed! 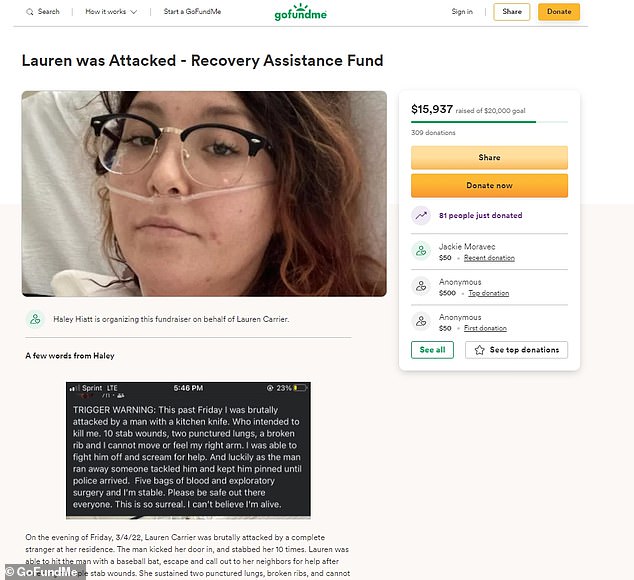 A GoFundMe fundraiser posted on her behalf has raised almost $16,000 since March 6 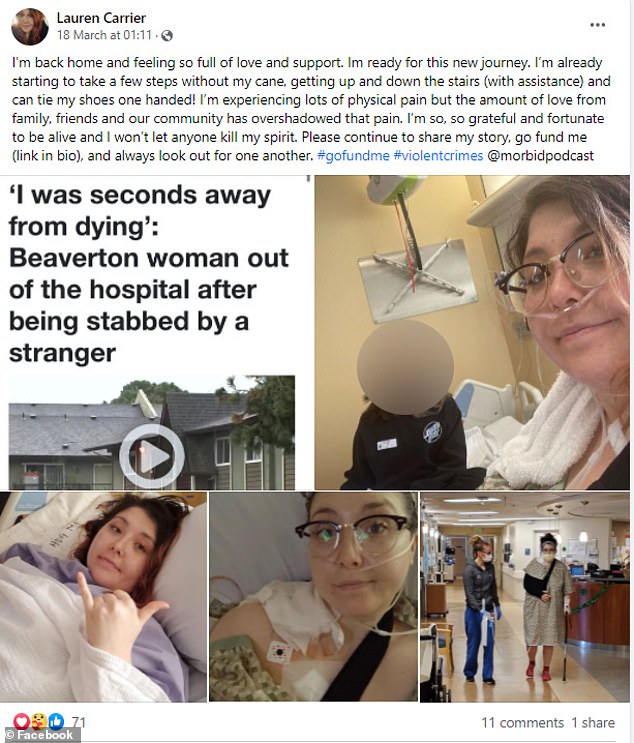 Carrier posted an update on her recovery on March 18, telling her followers that she’s ‘grateful and fortunate to be alive’

‘I’m experiencing lots of physical pain but the amount of love from family, friends and our community has overshadowed that pain. I’m so, so grateful and fortunate to be alive and I won’t let anyone kill my spirit,’ she wrote.

Beaverton is a suburb of Portland, which is already on track to surpass last year’s record-breaking homicide rate.

The Pacific Northwest city capped off February with 22 murders so far this year – up from 19 in 2021 – and is on track to hit around 130 by December, according to the Oregonian.

The city, which slashed its police budget in the wake of protests over George Floyd’s murder, set a record last year with 92 homicides – the highest since there were 70 homicides in 1987. 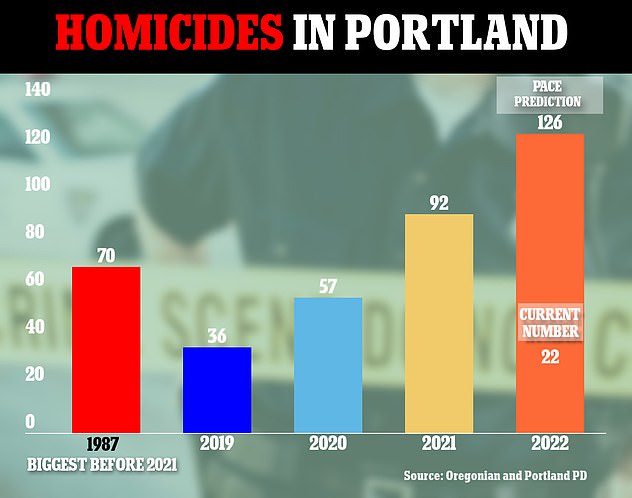 The Portland Police Bureau suffered a rash of retirements and resignations after Portland politicians embraced calls to defund the police.

A total of $15 million was initially chopped from the city’s budget, with progressive Portland prosecutors also criticized for refusing to charge 70 percent of people arrested by the city’s police.

In an attempt to stem the violence, the police department introduced a new ‘Focused Intervention Team’ that hit the streets in January.

The team is designed to address gun violence and the proliferation of the deadly weapons in a city where around 75 percent of victims are killed through gun violence.

But local business owners, such as the longtime downtown storefront Margulis Jewelers, say they haven’t experienced much respite from spiking crime.

For nine decades, the store’s treasure-filled windows made visitors rushing through Portland’s busy downtown stop in awe at the sight of delicate, vintage-styled gemstones – but owner David Margulis said he made the ‘agonizing decision to close after losing a battle with ‘vandalism, homelessness crisis, and sense of nighttime lawlessness.’ 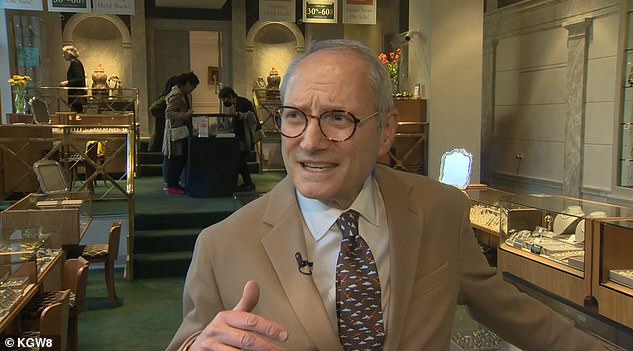 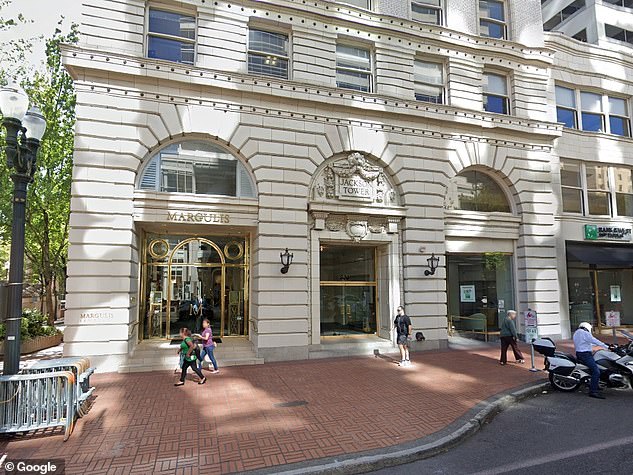 ‘Portland has experienced the perfect storm of adversity and independent businesses simply cannot withstand the economic forces which have caused the deterioration and resulting emptiness of Downtown Portland,’ he added.

Margulis had long decried the area’s descent into violence, blaming city officials for ‘doing the talk, but not walking the walk,’ and exacerbating the issue with woke policies.

In a last resort to save his decaying business three months ago, Margulis conducted a ‘survival sale,’ marking 20-40percent off the store’s entire multi-million dollar inventory.

The measure was not enough to balance out the 72 percent decrease from foot traffic in the downtown area – and the homeless encampments and riots driving away potential customers.

The Rose City has seen robberies spike 47 percent in the year to date through January.