Actress and comedian Wanda Sykes warned the US is ‘no longer a democracy’ as she slammed the Supreme Court justices who overturned the landmark court ruling Roe v. Wade.

Sykes, 58, accused the Supreme Court’s conservative judges of ‘lying’ under oath when they each suggested during their confirmation hearings that Roe v. Wade is settled precedent.

She also attacked Americans living in the ‘middle states’ for apparently telling blue states how to act as the ‘majority of people live in New York and California’.

The Supreme Court unraveled nearly 50 years’ worth of precedent and dramatically shifted the landscape of women’s healthcare on Friday when it overruled the 1973 landmark decision that granted federal abortion protections under the Constitution.

After returning the matter to states’ jurisdiction, nine GOP-led legislatures already enacted bans on the medical procedure as of Sunday and at least a dozen could soon follow suit. The ruling is likely to lead to abortion bans in roughly half the states. 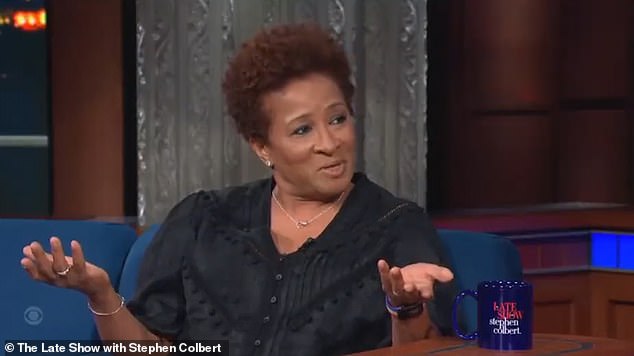 Actress and comedian Wanda Sykes warned the US is ‘no longer a democracy’ as she slammed the Supreme Court justices who overturned the landmark court ruling Roe v. Wade 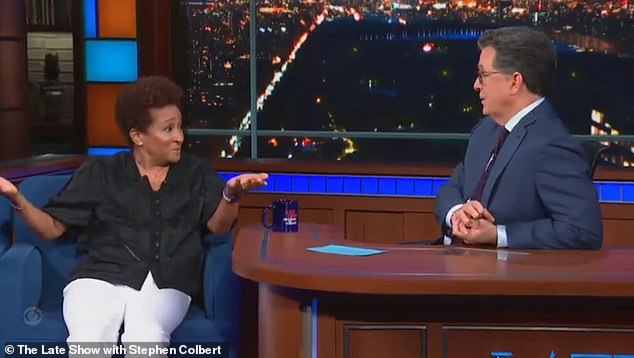 Sykes, 58, appeared on CBS’s ‘The Late Show with Stephen Colbert’ where she accused the Supreme Court’s conservative judges of ‘lying’ under oath when they each suggested during their confirmation hearings that Roe v. Wade is settled precedent

She added: ‘It just sucks man, it really does, you know. It’s like the country, it is no longer a democracy, right? We’re – it’s no longer majority rules.’

Sykes criticized the conservative Supreme Court justices who voted in favor of overturning Roe v Wade, accusing them of ‘lying’ during their confirmation hearings.

‘These judges, they basically lied during their confirmation hearings, right?’ Sykes said.

‘So how can you be a Supreme Court justice and you just lying?’ Sykes asked. ‘What, they had their fingers crossed or something? Yeah, it’s just a bunch of horsesh**. It really is.’ 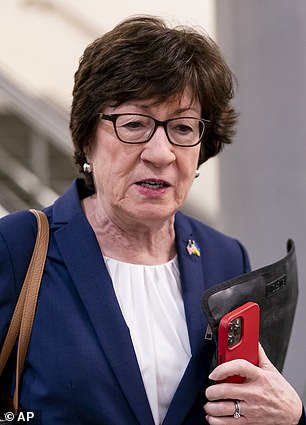 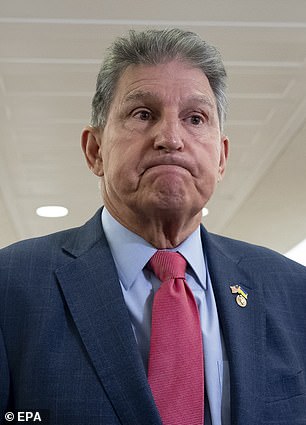 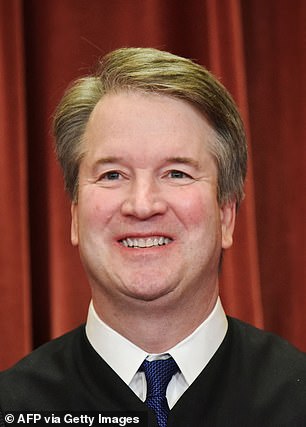 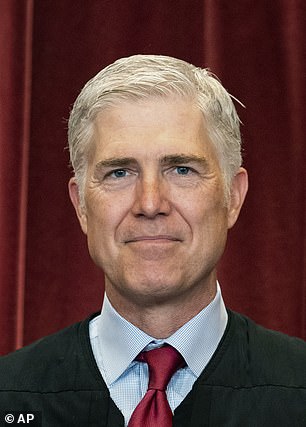 The senators had voted to confirm the Donald Trump appointed justices despite fears that they would overtrun the landmark abortion ruling, with the senators saying at the time that they trusted Kavanaugh and Gorsuch to uphold the law.

Now Collins, a Republican, and Manchin, a Democrat, are accusing the justices of misleading them as they criticized the court’s 5-4 ruling to end women’s federal right to an abortion.

‘This decision is inconsistent with what Justices Gorsuch and Kavanaugh said in their testimony and their meetings with me, where they both were insistent on the importance of supporting long-standing precedents that the country has relied upon,’ Collins said in a statement.

Manchin echoed the outrage, saying: ‘I trusted Justice Gorsuch and Justice Kavanaugh when they testified under oath that they also believed Roe v. Wade was settled legal precedent and I am alarmed they chose to reject the stability the ruling has provided for two generations of Americans.’ 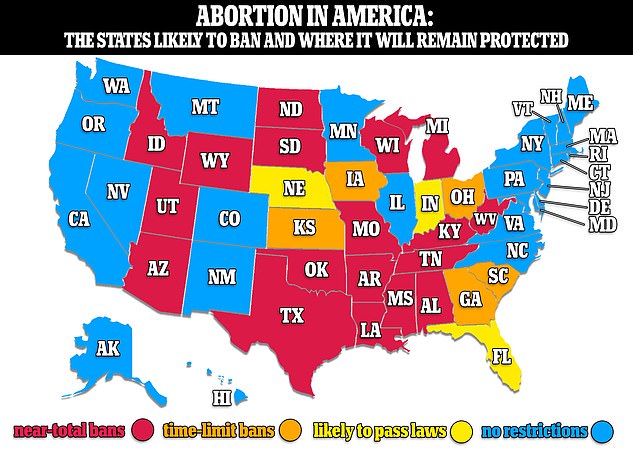 Meanwhile, Sykes also attacked the ‘middle states’ for apparently telling blue states what to do.

She said: ‘To me, it is like the problem is that middle stuff. It is those states in the middle, that red stuff.

‘Why do they tell get to tell us what to do when the majority of us live out in New York, California, and we are paying for all this crap, really. I mean, right? We’re footing the bill,’ Sykes said.

‘Well, that’s the union, it is supposed to be a representative democracy, but it turns out to be minority rule right now,’ Colbert noted.

‘California, if it were a country, it’d be like the fourth-, fifth-largest economy,’ Sykes said.

‘So if, you know, I’m fitting the bill, know your position. You know what I’m saying?’ the comic continued.

‘If I say, “Hey, let’s go out to dinner.” You don’t get to pick the restaurant. Just shut up and eat,’ Sykes exclaimed.

Her comments prompted some criticism on social media, with many accusing her of ‘not seeing Midwesterners as Americans’. 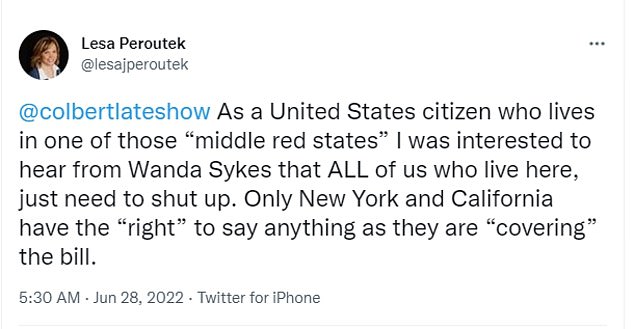 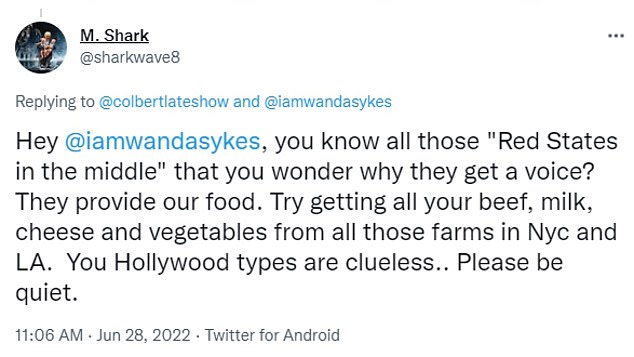 Her comments prompted some criticism on social media, with many accusing her of ‘not seeing Midwesterners as Americans’

Lesa Peroutek tweeted: ‘As a United States citizen who lives in one of those “middle red states” I was interested to hear from Wanda Sykes that ALL of us who live here, just need to shut up.

‘Only New York and California have the “right” to say anything as they are “covering” the bill.’

Radio host Tony Katz tweeted: ‘The elitists want the Midwest to grow their food and shut their mouths. Wanda Sykes doesn’t see Midwesterners as people, as Americans. She sees them as “stuff”, like her property.’

Another Twitter user wrote: ‘Hey Wanda Sykes, you know all those “Red states in the middle” that you wonder why they get a voice? They provide our food.

‘Try getting your beef, milk, cheese and vegetables from all those farms in NYC and LA. You Hollywood types are clueless… Please be quiet.’

Thirteen states had so-called ‘trigger laws’ that immediately made abortion illegal with the overturn of Roe v. Wade.

Hillary Clinton says Clarence Thomas has been a person of ‘resentment, grievance and anger’ his whole life and ‘women are going to die’ after Supreme Court overturned Roe v. Wade

Hillary Clinton said in a Tuesday morning interview that for as long as she has known Supreme Court Justice Clarence Thomas, he has been filled with ‘resentment’ and ‘anger’ as she insisted the Roe v. Wade ruling will result in women dying.

‘I went to law school with [Justice Thomas],’ Clinton told CBS Mornings in a pre-recorded interview. ‘He’s been a person of grievance for as long as I’ve known him — resentment, grievance, anger.’

The failed 2016 Democratic presidential nominee said that Thomas has ‘signaled’ to lower courts and state legislatures that they need to ‘find cases, pass laws, gets them up’ to restrict abortion, contraception rights and same-sex marriage.

Clinton said that people who are ‘right wing’ and ‘very conservative’ are paying attention to Justice Thomas when it comes to these issues and the potential risk of their overturn.

‘The thing that is – well there’s so many things about it that are deeply distressing – but women are going to die, Gayle,’ Clinton said.

She insisted: ‘Women will die. 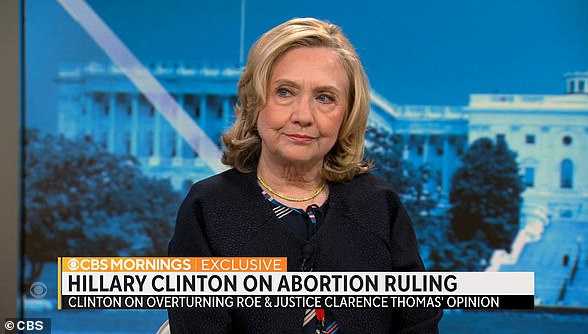 Hillary Clinton said Tuesday that Supreme Court Justice Clarence Thomas has been ‘a person of grievance for as long as I’ve known him — resentment, grievance, anger’ 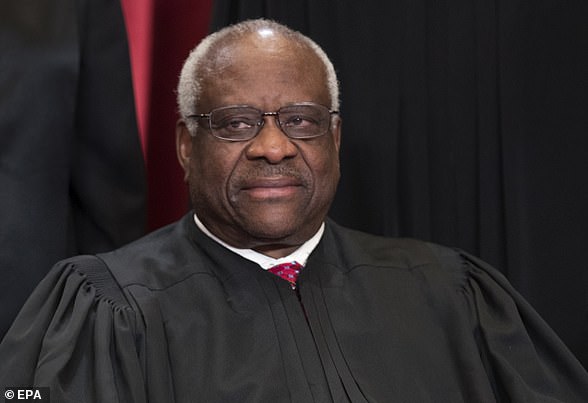 Clinton went to law school with Thomas and said his and other conservative Justices’ ruling overturning Roe v. Wade on Friday will lead to ‘women dying’

The case at hand in the Supreme Court was Dobbs v. Jackson Women’s Health Organization, which sought to challenge a Mississippi law that banned abortion at 15 weeks. The law was upheld by the court in a conservative 6-3 majority opinion.

Thomas, one of the most conservative members of the Supreme Court, said in interviews published in a new book that he wasn’t sure why he was nominated for the Supreme Court – and ‘celebrated not being nominated’ when he thought President George H.W. Bush had passed him up.

‘I have no idea why or how I got nominated,’ Thomas said, according to the book Created Equal: Clarence Thomas in His Own Words, which came out earlier this month.