As you may have noticed, it’s hot outside. In fact, it’s the hottest day ever in the UK today with temperatures above 40C (104F).

But, as people who live in other countries like to remind us, other places can and do get much hotter than that. Which begs the question: Where are the hottest places on Earth?

Here, MailOnline gives you the run-down of the ten hottest air temperatures ever recorded – with the aptly-named Death Valley taking top spot.

Located in the Mojave Desert in eastern California, close to the border with Nevada, Death Valley is one of the hottest, driest, and most-inhospitable places on the planet.

It holds the current record for the highest temperature ever recorded, 56.7C (134F) that was clocked in Furnace Creek during a heatwave that struck the region in July 1913.

Over the course of five consecutive days, temperatures soared above 54C (129F) before hitting the record on July 10 – thought to be due to a storm that whipped hot sand into the air, heating it up. 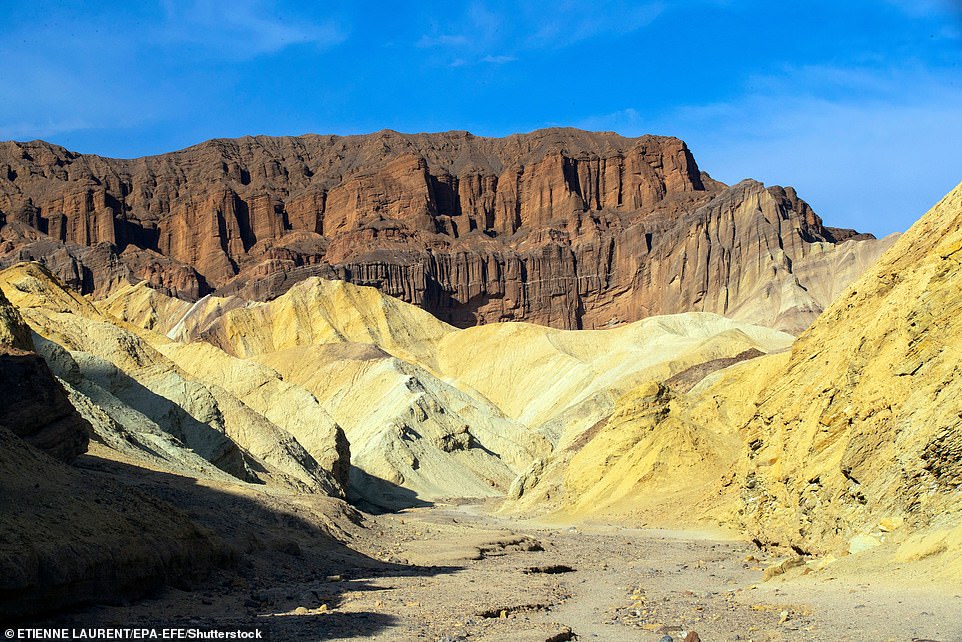 Death Valley is located in the Mojave Desert in eastern California, close to the border with Nevada, and is one of the hottest and driest places on Earth – holding the record for the hottest temperature ever recorded

For 90 years the record was held by a different location – El Azizia in Libya, at 58C (136.5F) – but in 2012 scientists from the World Meteorological Organisation (WMO) reviewed the measurement and concluded it was false.

An inexperienced data-collector combined with bogus methods of measuring that didn’t fairly represent the conditions led researchers to conclude the Libya record could be off by as much as 7C (44.5F).

Similar concerns have since been raised about the Death Valley measurement, but the record has been allowed to stand for now while it is investigated.

Kebili is located in central Tunisia on the eastern edge of Chott el Djerid: A huge Saharan salt lake that is famous for its multi-coloured waters that can turn pink and orange as it dries out in the summer due to mineral deposits.

The town itself is centered around a freshwater oasis where date palms grow, and is one of the oldest inhabited places in northern Africa – with evidence of human habitation found that date back 200,000 years. 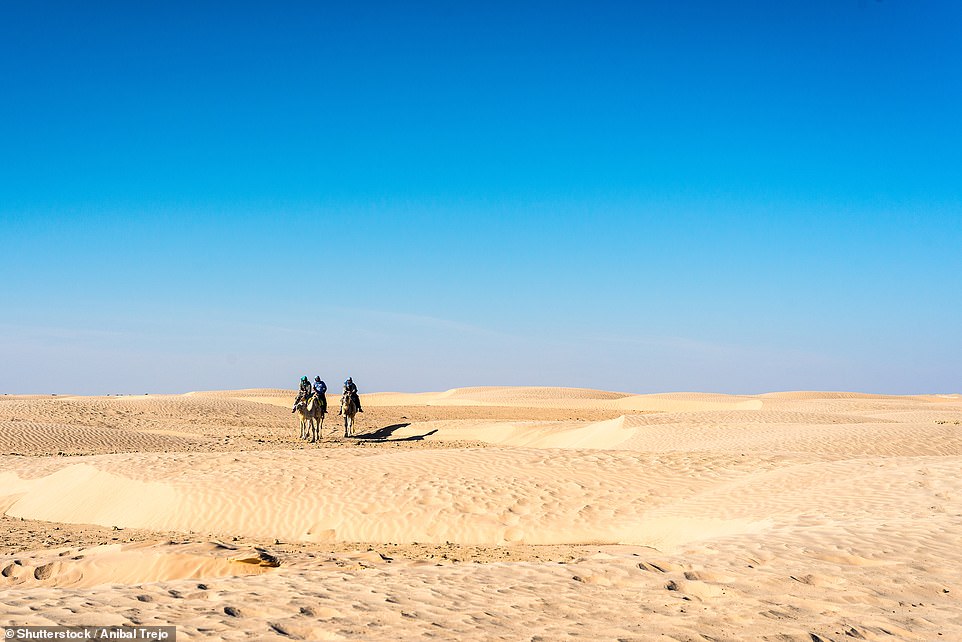 Kebili is a desert town in Tunisia, located on the east side of the Chott el Djerid – a huge salt lake that leads to the Sahara (pictured). The second-highest official temperature record was set here in 1931 at 55C

It is also one of the consistently hottest places on earth, with temperatures frequently above 40C (104F) during July and August.

With that in mind, it is perhaps little surprise that the world’s second-highest temperature ever recorded was clocked here on July 7, 1931, by French and Italian colonists at 55C .

As with most old temperature records, its accuracy is in question but – for the time being at least – the World Meteorological Organistion has allowed it to stand.

A city of 1.1million people in southern Iran, close to the border with Kuwait, Ahvaz is an ancient metropolis that spans the Karun River – one of only two navigable rivers in Iran.

Ahvaz’s hottest temperature – and unofficially the third-hottest ever recorded – was logged during a sweltering heatwave that struck in the summer of 2017.

Etienne Kapikian, a forecaster at French meteorological agency, registered a temperature of 53.7C (129F) in the city on June 29 as a ‘heat dome’ created extremely hot, humid conditions. 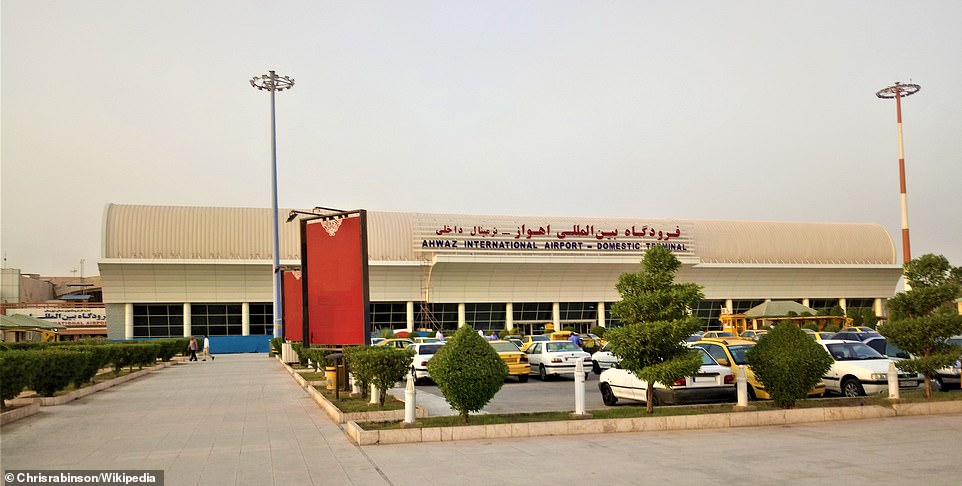 A freak ‘heat dome’ baked the city of Ahvaz, in southern Iran, over the course of several days in June 2017 – peaking on June 29 when a record temperature of 54C was recorded at the city’s airport

But Christopher Burt, of Weather Underground, measured a slightly-higher reading of 54C – which is the current record-holder.

World Meteorological Organsiation scientists are currently reviewing the data – which could take years – meaning the record is unofficial for now.

But Kapikian said at the time that Ahvaz had set ‘a new absolute national record of reliable Iranian heat’ and logged the hottest temperature ever recorded in June over mainland Asia.

Sitting 720ft below sea level in a basin sandwiched between the West Bank and Jordan, Tirat Zvi is surprisingly fertile because of its proximity to the Jordan River and is known for its date plants.

It is also known for recording what could be the the highest-ever temperature ever clocked in Asia and the joint third-highest in the world – 54C (129F) which was logged on June 21, 1942. 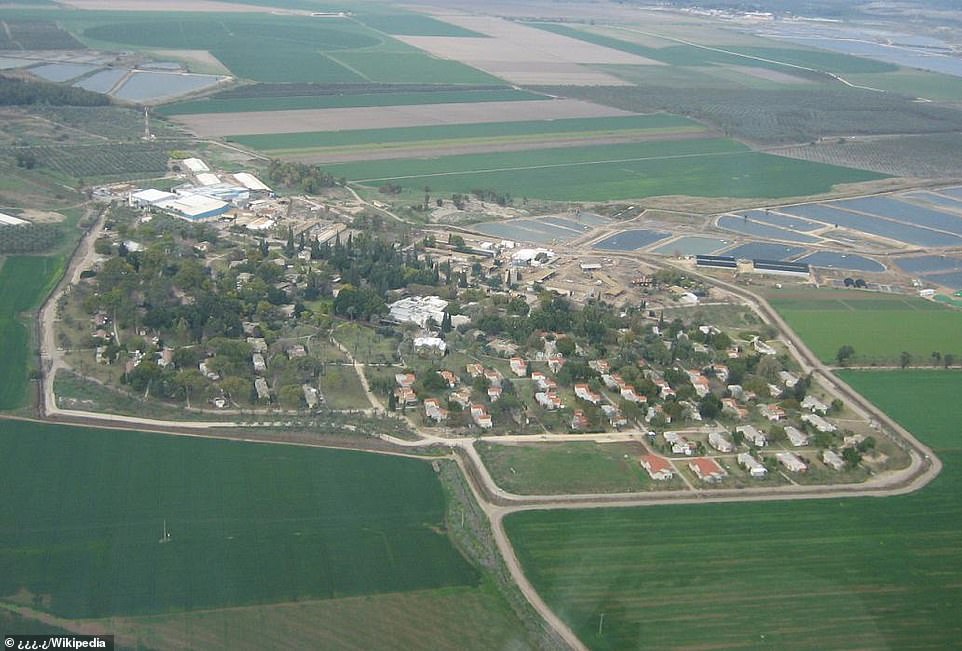 Tirat Zvi is a very hot but surprisingly fertile kibbutz in eastern Israel close to the border with Jordan (pictured) which recorded a temperature of 54C back in 1942, though the record is hotly debated

Perhaps unsurprisingly, given the age of the reading, its validity is in doubt because the thermograph chart that backs up the reading only shows the graph line rising to 53C. Someone has then written ’54C’ on the chart.

Meteorologist Christopher Burt suggests this is ‘obviously’ an erroneous reading of the chart, and shout not stand – noting that readings from other nearby stations do not back it up.

However, whether or not the reading is truly false remains open to debate and the 54C record is still widely cited.

Unlike most of the other entries on this list, Mitribah is not an inhabited location but is instead a remote WMO climate station located in the Kuwaiti desert – close to a US military base.

That makes the reading of 53.9C (129F) – recorded during a heatwave in the Middle Eastern country on July 21, 2016 – perhaps the most-reliable of the highest-recorded temperatures. 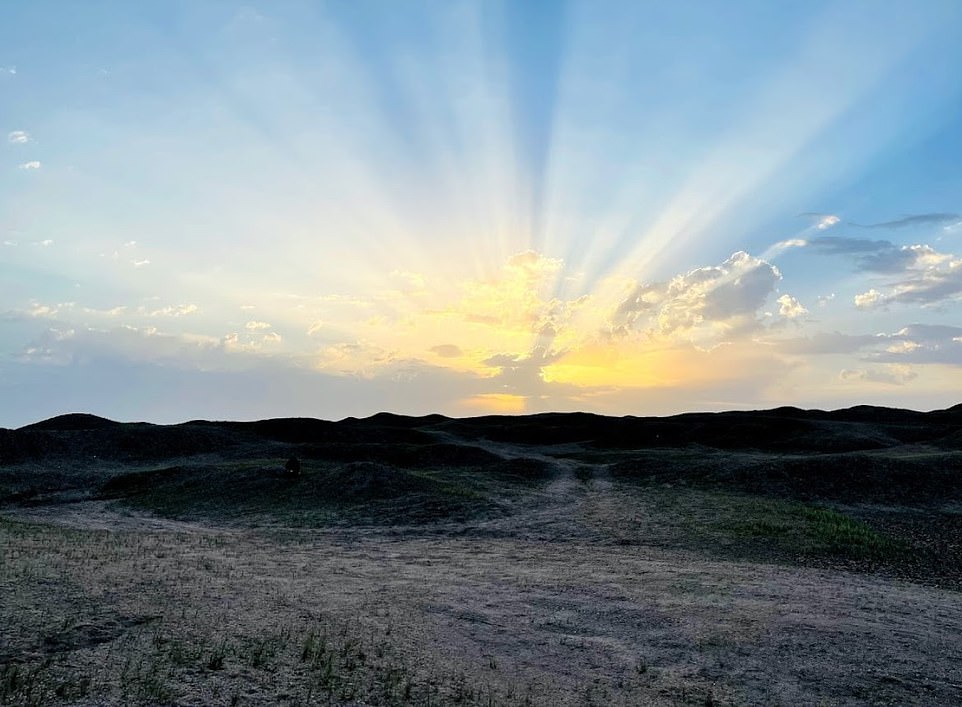 Mitribah is a remote weather station located in Kuwait (pictured, the Mitribah desert) near a US military base which logged a high temperature of 53.9C on July 21, 2016, making it the highest undisputed record on this list

While Kuwait is no stranger to hot weather, the 2016 heatwave was exceptional and smashed previous records.

Caused by a particularly strong El Nino event in the Pacific – where warm water currents that typically flow west to east revert – both Kuwait and Iraq saw some of the hottest temperatures ever recorded that year.

Another casualty of the 2016 El Nino phenomenon, Basra – Iraq’s main port city in the south-east of the country – recorded its hottest days ever when temperatures hit 53.9C (129F) for two days in a row on July 20 and 21.

The extreme heat cause power outages as infrastructure failed, forcing many residents to swim in the city’s rivers in order to keep cool and leaving streets virtually deserted. 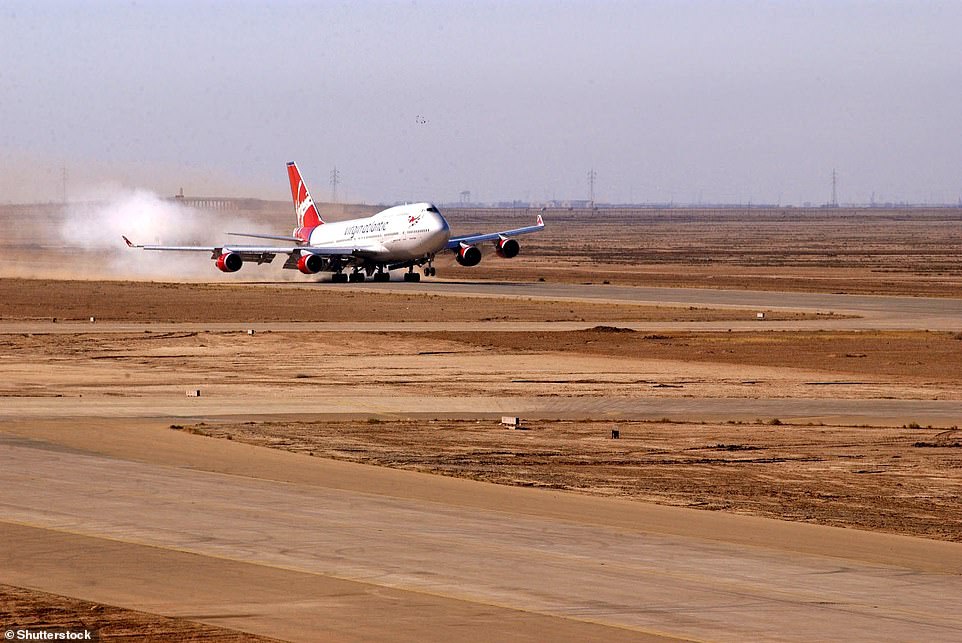 A freak El Nino event in the South Pacific in 2016 caused extreme temperatures across the Middle East that year with Kuwait and Iraq badly affected – 53.9C (129F) was recorded at Basra Airport on July 20 and again on July 21

Government offices were closed for the day and showers were set up in public places to help people cool off.

Iraqis are no stranger to summer heatwaves – with the July average in Basrah hovering around 45C – but even by those high standards, the 2016 heat stands out as exceptional.

Located in the desert in south-west Pakistan, close to the border with Iran, Turbat is hot year-round – highs average above 40C (104F) in the summer months and around 30C (86F) even in December. 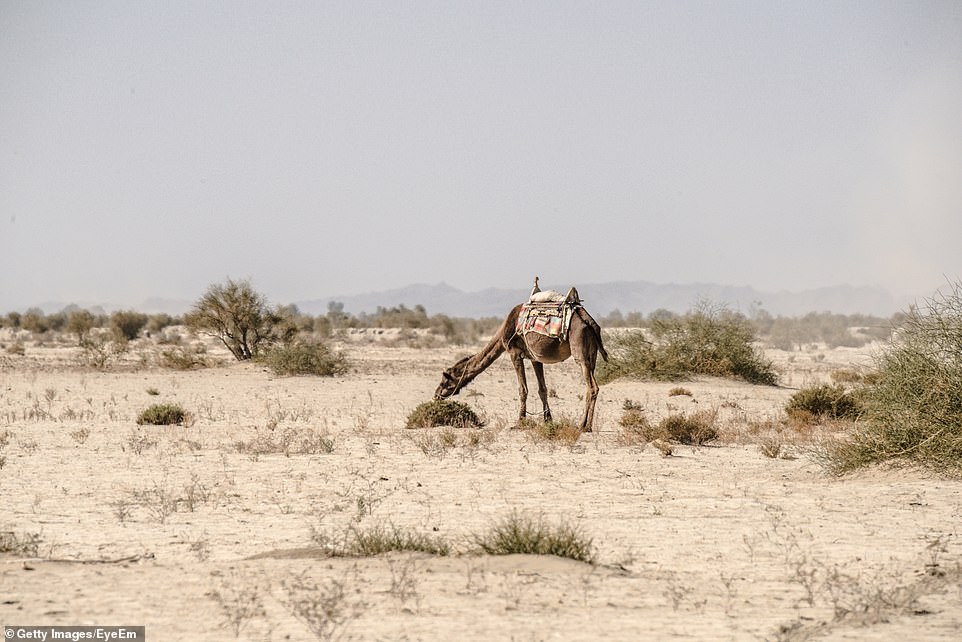 A 2017 heat wave that Pakistan’s meteorologists blamed on climate change saw temperatures in the city of Turbat reach 53.7C (128.5F) in May 2017 (pictured, the nearby desert)

The WMO has recognised the 53.7C record as authentic, making it officially the fourth-hottest temperature recorded, according to their data.

‘Pakistan is under the influence of extreme climate change and over the past few years, we have witnessed several extreme weather events,’ the country’s Meteorological Office said at the time.

Unofficially the hottest temperature recorded in the UAE, 52.1C was logged at the Al Jazeera Border Gate in July 2002, according to a Gulf News article published in 2016.

It is thought the measurement was taken at one of the Emirates southern border crossings with Saudi Arabia – a desert region far from the coast where temperatures are typically hottest. 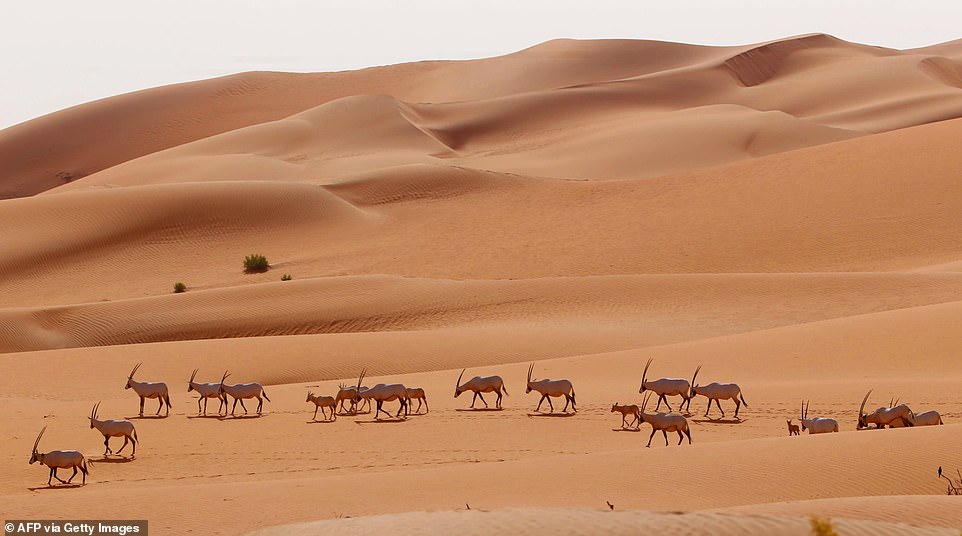 Two UAE newspapers report the highest temperature recorded in the Emirates as 52.1C which they say was logged at the southern Al Jazeera Border Gate for just 15 minutes back in 2002 (file image, Omani desert)

The ‘deep south’, as the article calls it, is warmed by south-easterly winds that carry up hot air from the Rub Al Khali desert to the south of the country.

The National reported the same figure of 52.1C in July 2002, but said it was only reached for 15 minutes. The reading has not been confirmed by the WMO.

Saudi’s previous-highest temperature was 51C that had been recorded just three days earlier at Al-Ahsa. 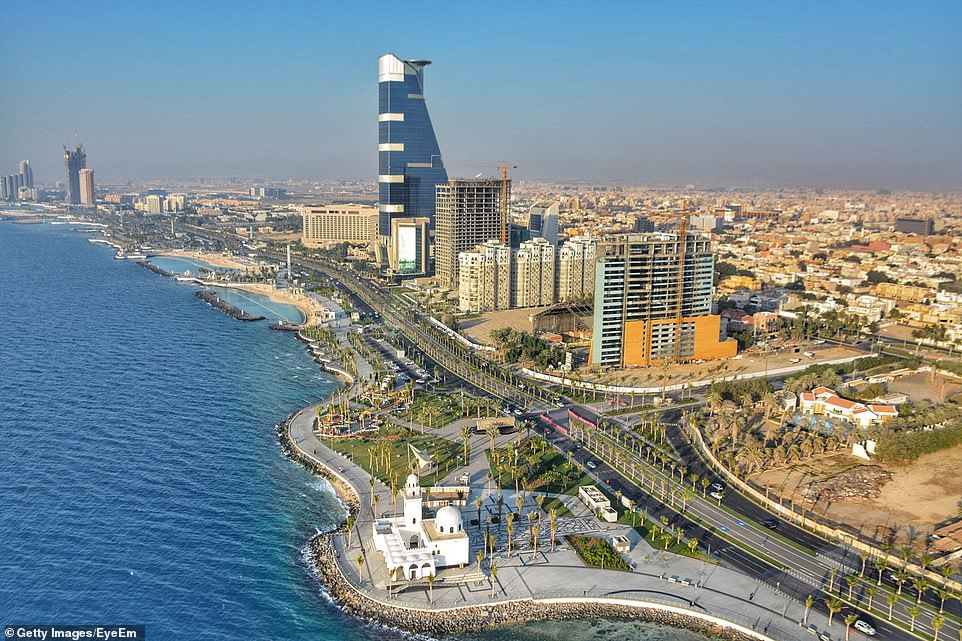 Jeddah, the second-largest city in Saudi Arabia, hit 52C in June 2010 – accompanied by sandstorms that caused widespread power cuts and forced policemen to direct traffic in the scorching heat

The extreme heat was accompanied by sandstorms that knocked out power in Jeddah and surrounding areas, which rely on the city for power.

Blackouts forces police officers on to the streets in the middle of the day despite the heat to help direct traffic.

A remote weather station in the Arabian country logged a temperature of 51.6C on June 16 last year, making it the highest ever recorded in Oman and the tenth-highest in the world.

The figure was posted online by Oman’s meteorological agency without much fanfare, and it is unclear what conditions were like in the wider country at the time. 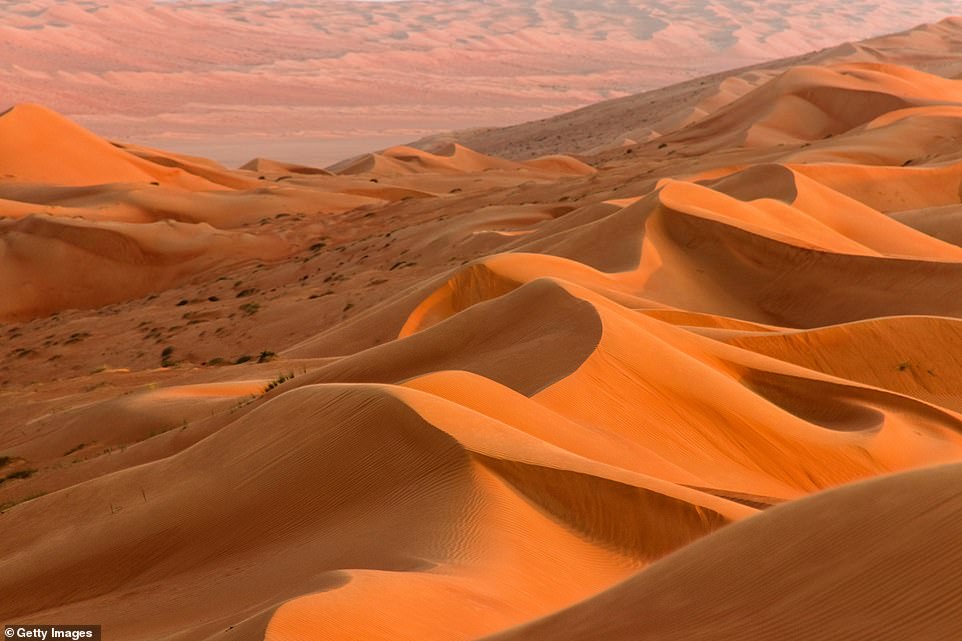 Joba, a remote weather station in Oman on the southern tip of the Arabian Peninsula, recorded a temperature of 51.6C in June last year – making it the tenth highest ever logged (file image, Omani desert)

However, Oman is no stranger to heat – and is thought to have set the record for the world’s hottest overnight temperature back in 2018.

On that occasion, the city of Quriyat never got below 42.5C (123.5F) on June 26 even after the sun had gone down making it a world record according to expert Maximiliano Herrera.