Edinburgh is the best city in the world right now, according to Time Out.

The guide’s 2022 World’s Best Cities Index says that Edinburgh’s beauty and walkability has earned it the coveted title, with Chicago in second place, the Colombian city of Medellin in third, Glasgow in fourth and Amsterdam in fifth place.

The ranking, now in its fifth year, was drawn up via a survey of 20,000 city dwellers around the world, seeking to ‘point people in the direction of the places that locals are raving about’ and putting an emphasis on ‘the things that make cities great places to visit as well as to live’. Scroll down to see the full ranking… 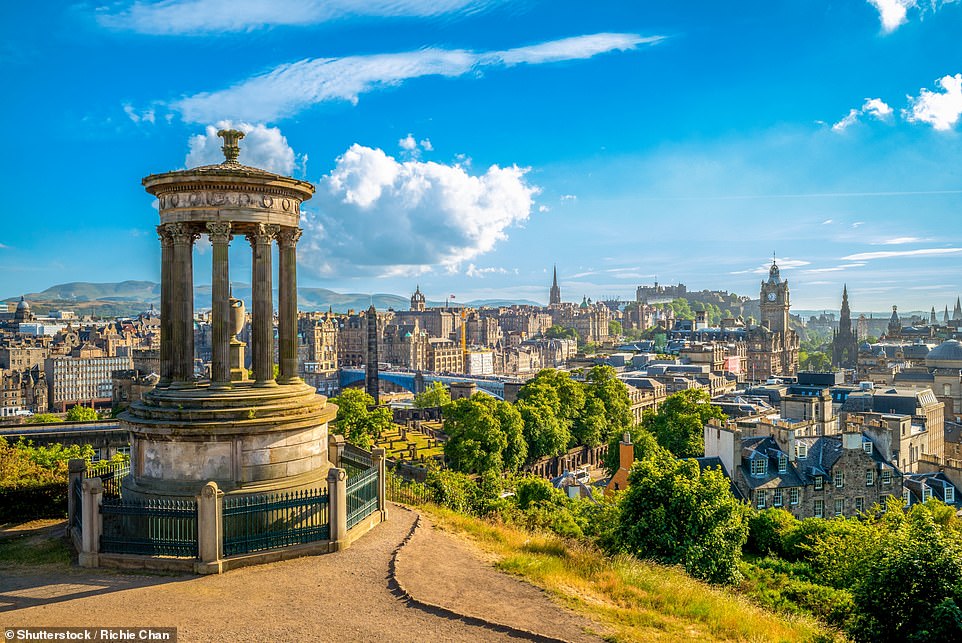 According to Time Out, this year’s gold medal winner ‘is the most beautiful city in the world [according to 95 per cent of residents] and also the most walkable city [says 93 per cent]’, making it ideal for visitors who are looking to explore historic landmarks, architecture and scenic hotspots on foot.

The guide notes that the Scottish city’s dining and drinking scene is ‘ever-evolving, with heaps of new things to do’.

Time Out adds: ‘Self-expression is encouraged, with 88 per cent of locals saying it is easy to express who you are in the city. It’s something that’s celebrated every summer with the Edinburgh Fringe Festival, which this year will be marking its 75th anniversary.’ 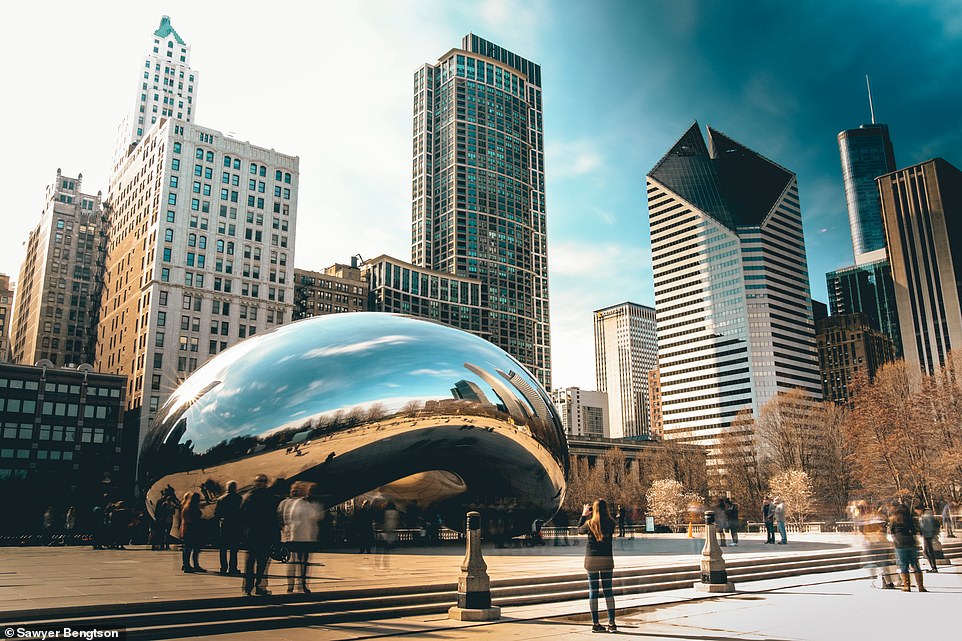 There is always something to do in the art and culture scene in second-place Chicago, Time Out declares

What earns Chicago the silver medal? For starters it gets the second-highest food-and-drink-scene rating in the world, with 96 per cent saying there is ‘great choice’, Time Out reveals.

Ninety-five per cent of those polled say there is always something to do in the art and culture scene too, we’re told.

The guide adds: ‘Whether you want to try world-class dining from high-end restaurants to outstanding family-run eateries, party until 4am at historic clubs, spend a day soaking up the sun along Lake Michigan, see iconic artworks or just wander among different neighbourhoods – all this is putting the city on the map for visitors.’ 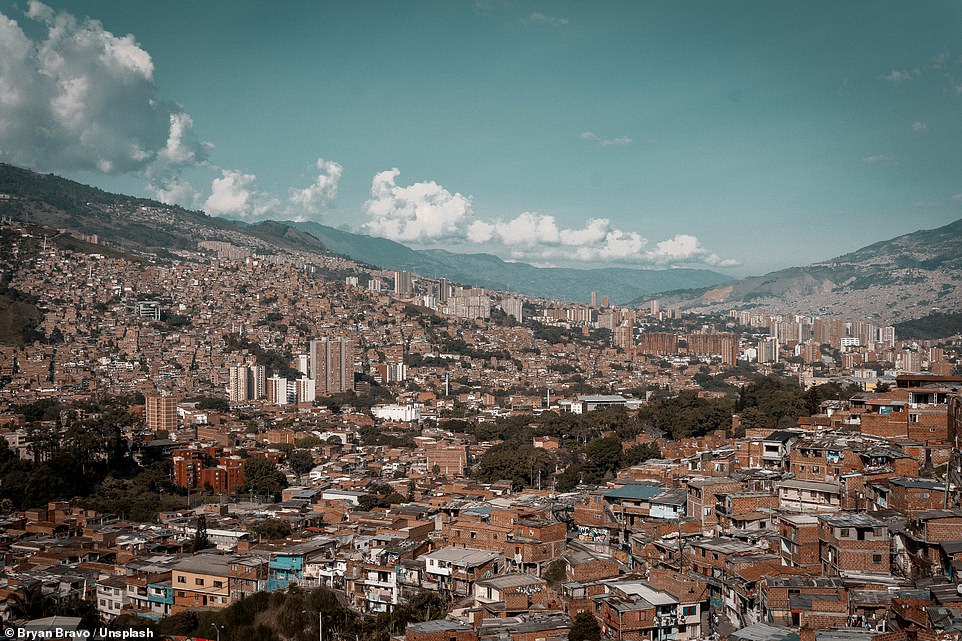 Scooping up the bronze medal in the ranking, Medellin offers community spirit and a vibrant nightlife

It was once the home of notorious drug baron and ‘King of Cocaine’ Pablo Escobar. But in 2022, new entry Medellin in Colombia is ‘the place to visit for those looking for a good time’.

According to the guide, Medellin tops the charts for its food and drink (97 per cent) and nightlife and partying (90 per cent) scenes, as well as ranking first for community spirit (94 per cent).

What’s more, Time Out notes that there are plenty of ‘design-forward boutique hotels popping up all over the city, showcasing impressive Colombian craftsmanship’. 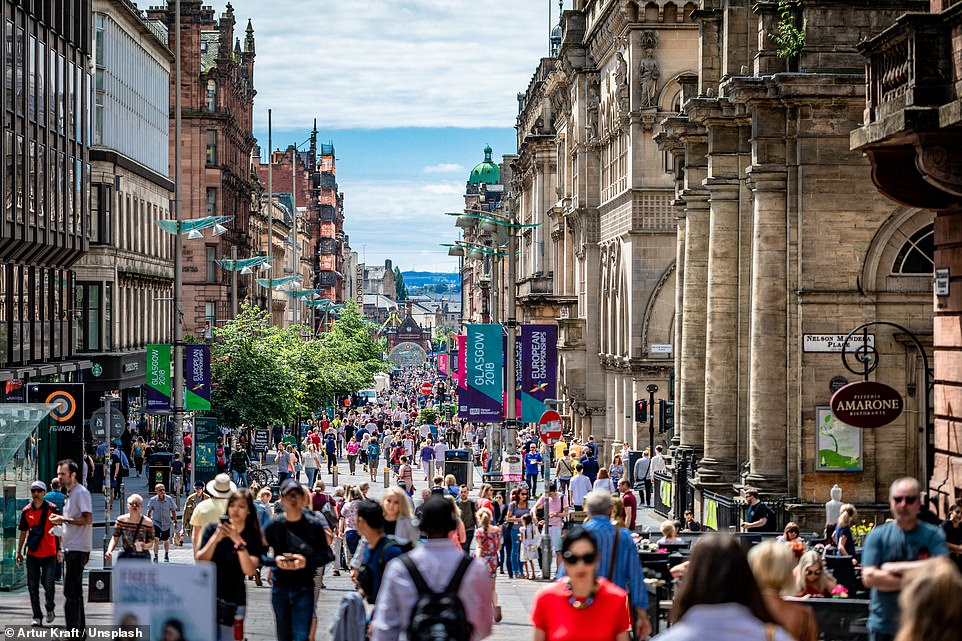 Glasgow, which ranks fourth, ‘excels at being outgoing and at going out’, according to Time Out

The second Scottish city to make the top five, Glasgow is described as the ‘friendliest city in the world this year’, with 78 per cent of locals agreeing with this statement.

Time Out notes: ‘It’s also the second-most affordable city, with 87 per cent saying it wasn’t expensive. So 2022 is the perfect time to visit and explore the place and meet the locals. It’s a city that excels at being outgoing and at going out.’

The guide recommends checking out the city’s ‘burgeoning dining scene’ and SWG3 – the ‘world’s first body-heated club’, where ‘dancing literally helps keep the lights on’. 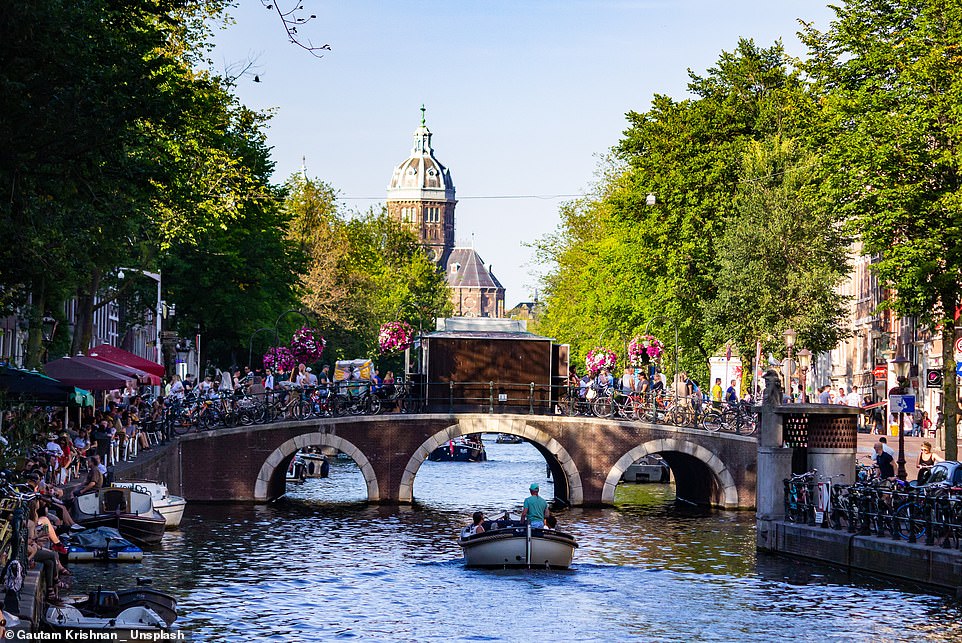 Fifth-place Amsterdam, pictured, is hailed as one of the most progressive cities in the world

‘For those looking for a city where they can be themselves, look no further than Amsterdam, the easiest city in the world to express who you are (according to 89 per cent of residents) and the second-most progressive in the world,’ says Time Out.

Unsurprisingly, 100 per cent of residents agree that their famously cycling-centric city is easy to cycle around.

And where to go on a bike? Time Out adds that Amsterdam is large enough to reward exploration – with some great festivals happening this year. 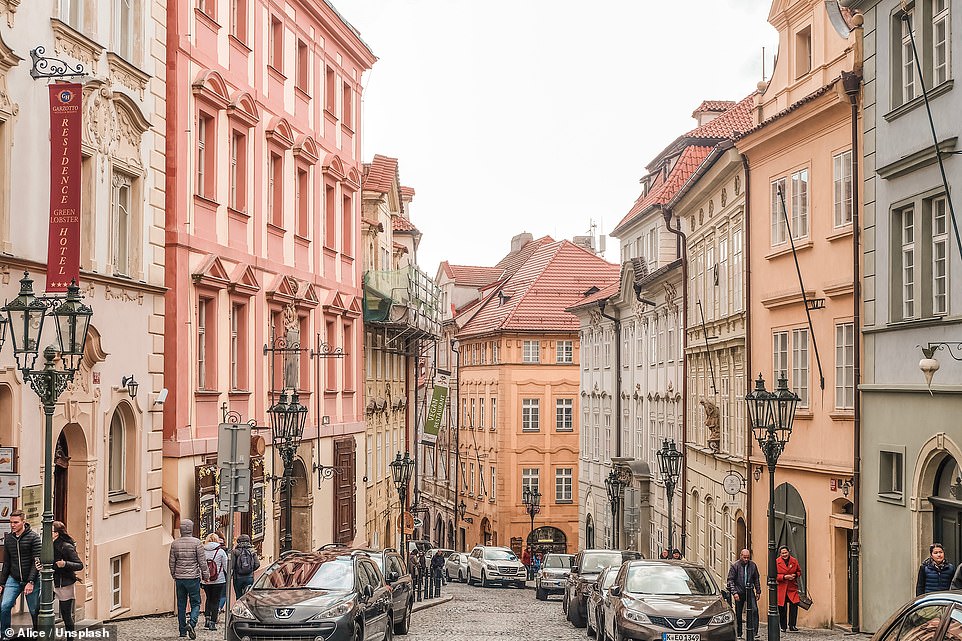 Prague is the third-most-beautiful city in the world, according to Time Out, which says: ‘Ninety per cent of locals view their city as beautiful, and 96 per cent say it is easy to get around on public transport – two factors that make for an attractive way of life, and the perfect city break.’

It adds that ‘revamped’ public spaces in the city have lots to offer locals and visitors alike.

Where is worth visiting? ‘The recently completed riverbank at Naplavka has been nominated for a prestigious architecture award and, downstream, leafy Strelecky Island offers timeless views,’ Time Out reveals. 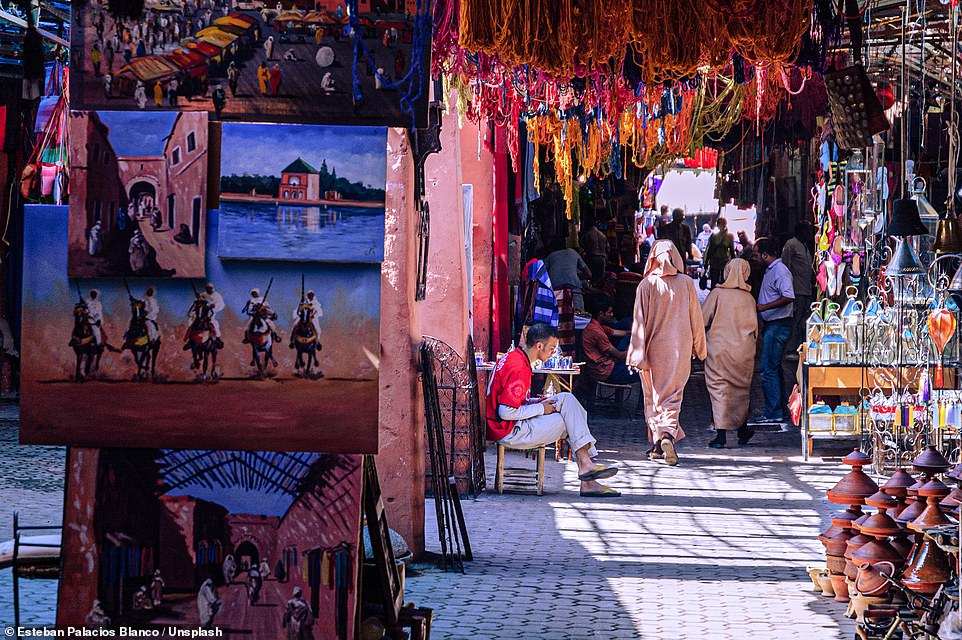 Seventh-place Marrakech, pictured, has been voted the least stressful city in the world

‘Looking for a holiday romance? Marrakech tops the charts as the easiest city in the world to hook up with people (according to 69 per cent of residents),’ says Time Out.

The guide continues: ‘For those just looking to make friends or meet interesting people it’s still a top spot – it comes second for making new friends, and number one for getting to know your neighbours.’ To top things off, it has also been voted the least stressful city in the world.

There’s plenty for culture vultures too – visitors will enjoy the Macaal and the MCC Gallery, which host ‘brilliant’ modern African art exhibitions, Time Out reveals. 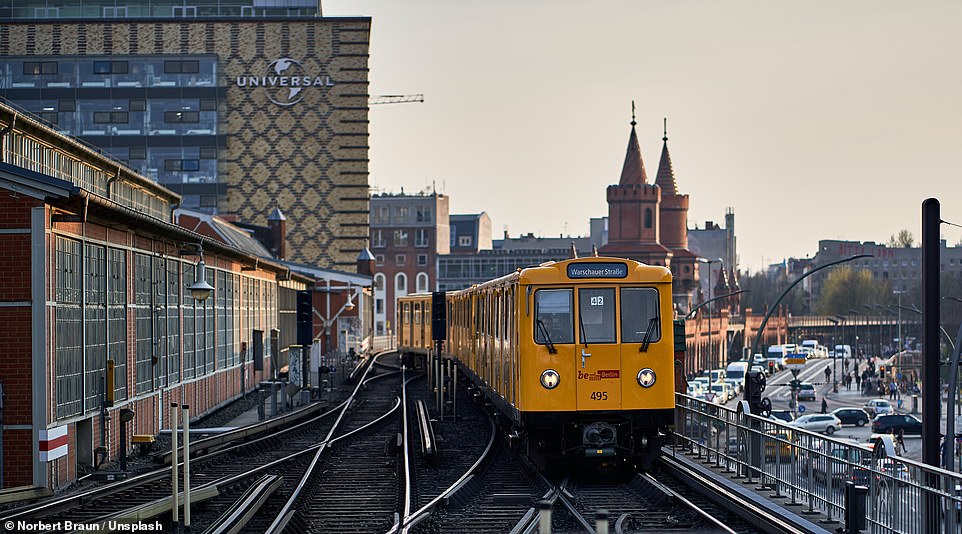 According to Time Out, Berliners are ‘in love with their public transport system’, with 97 per cent of locals praising it. The city ranks eighth overall

HOW THE TIME OUT CITY RANKING WAS COMPILED

Time Out says that the Index helps to ‘point people in the direction of the places that locals are raving about’.

The guide created the ranking via a survey of 20,000 city-dwellers around the world, combined with advice from its ’global network of expert editors and contributors’. Using their responses, Time Out compiled its fifth annual ranking of the world’s best cities.

It explains: ‘The top cities this year are places that excel at going out, including eating and drinking; art, culture and museums; and nightlife. They are places that locals rate highly for fun and for beauty and aren’t boring, overly expensive or overrated – according to the people who know them best. To make for an even more enjoyable break, the top picks also score well for practical stuff like walkability, good public transport and safety, as well as sustainability.’

Dave Calhoun, Chief Content Officer North America and UK at Time Out, says: ‘This year, we are showcasing the cities that locals, and our editors, not only love living in, but that we think everyone should be visiting. Many people will be planning their first city break in a long time, and our list of the Best Cities in the World provides the ultimate travel bucket list.’

Berlin is described as ‘affordable’ and ‘easy to get around’ by Time Out, which says: ‘It ranks second for “variety of things to do” and is the city least-described as expensive by locals.’

The guide reveals that Berliners are ‘in love with their public transport system’, with 97 per cent of locals praising it.

Time Out says: ‘There is truly something for every kind of visitor: The city’s infamous weekend-long parties are in full force, and when it comes to fine dining, the German capital has never been more minted.’

There is lots of choice for those with less cash to burn too, including ‘revolutionary walking tours’ and ‘cutting-edge contemporary art shows’, Time Out reveals. 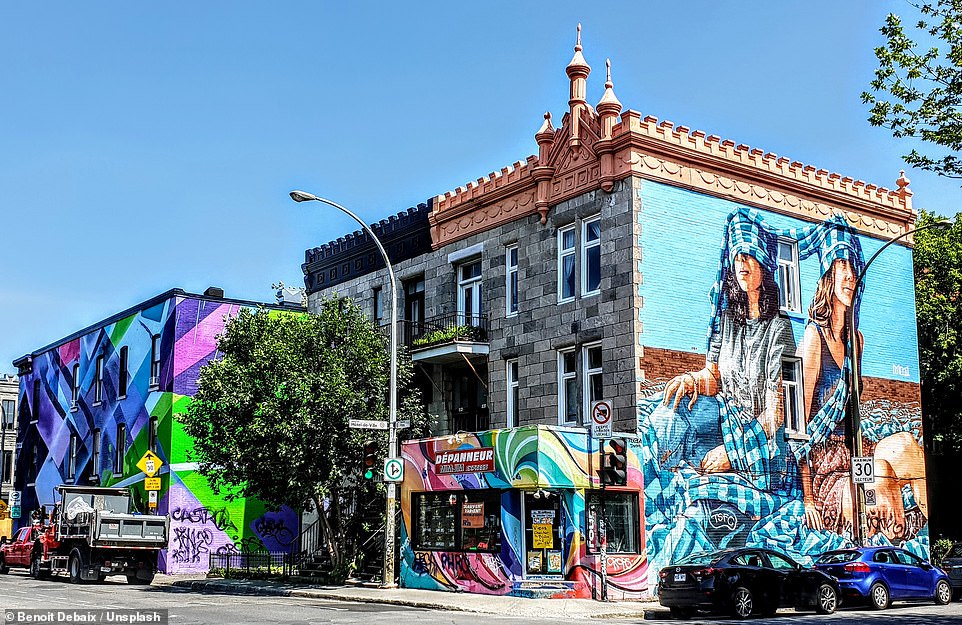 This Canadian city is labelled a ‘real all-rounder with a top-notch food and drink scene’ in the Time Out study, with 93 per cent of locals saying that it’s easy to find a great meal.

Montreal also offers great art and museums, with 82 per cent saying there’s always something good on. According to the guide, now is a great time to visit because it’s ‘prime festival season’, with ‘free concerts, waterfront festivals and a nightlife scene on steroids’ to explore. 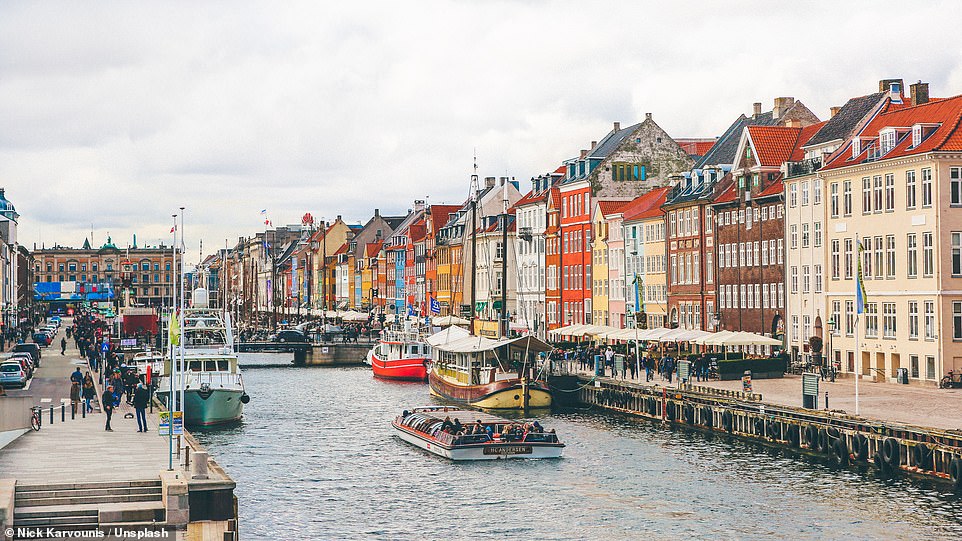 Rolling into 10th place is Copenhagen, a city that has ‘seriously embraced its waterways, with hydrofoil bikes, floating saunas, hot tubs and even kayak bars galore’

‘Travellers should head to Copenhagen if they’re looking to enjoy one of the world’s greenest cities, as it ranks second in the world for sustainability (75 per cent praised it), walkability (86 per cent of locals singled this out) and ease of getting around by bike (97 per cent),’ Time Out reveals.

On top of that, the guide notes that the city has ‘seriously embraced its waterways, with hydrofoil bikes, floating saunas, hot tubs and even kayak bars galore’.

There’s one drawback – according to Time Out, locals don’t recommend the city as a place to make new friends.

For more on the 53 cities in the ranking visit www.timeout.com/things-to-do/best-cities-in-the-world.