According to the press release that followed the dethronement of former Emir of Kano and the ex-Central Bank of Nigeria Governor, he was dethroned by Governor Ganduje because he was not loyal to the Governor, frequent absence from official meetings and state functions, political differences between him and the Governor among others.

Other reports also suggested that he was dethroned because he reportedly worked against the re-election of Ganduje during the 2019 Guber polls. 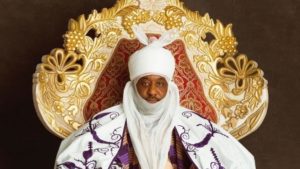 However, the Governor has finally broken his silence. According to him, he dethroned Sanusi Lamido Sanusi because he wanted to save the institution from abuse.

He also revealed that ex-Emir of Kano was appointed not because he was the most deserving at that time but his appointment was based on the motive to a take a swipe at former President, Goodluck Jonathan who sacked him as CBN governor over claims that $49 billion was stolen by some individuals under Jonathan’s government.

Sanusi was appointed Emir of Kano not because he was the best man for the throne but to retaliate what Jonathan did to him.

That was to prove that what Jonathan did to him was wrong and that the people of Kano wanted their son as Emir and therefore they decided to appoint him as Emir.

But when he was appointed, there was a lot of demonstration with people burning tyres here and there. But because of government backing, he was sustained on the stool.

When I became governor, (that’s why you will laugh), I said yes, Jonathan medicine is an important medicine.
That medicine, even though I am not a medical doctor, would serve the same purpose, for the same disease and the same patient.

The said this during the presentation of a book authored by a journalist, Bonaventure Philips Melah, on former President Goodluck Jonathan recently.