By Melissa Koenig For Dailymail.Com

Three people were killed and four others – including one child – were injured after an Amtrak train collided with a car in Brentwood, California.

Authorities say the car pulled into a long rural dirt driveway near the intersection of Orwood Road and Bixler Road at around 1pm when the Amtrak train rammed into it.

The car then careened off the road and hit another vehicle.

Three women, all over the age of 50, according to The Mercury News.

A child and two men were also hospitalized with serious injuries, and another person suffered moderate injuries.

Those who who were seriously wounded were rushed to the John Muir Medical Center after the crash on Sunday afternoon, according to ABC News.

Battalion Chief Craig Auzenne, of the East Contra Costa Fire Protection District, told reporters at the scene that none of the 81 passenger or five crew members on board the train were injured.

In fact, he said, the train came to a stop about a quarter-mile from where the sedan slammed into an SUV.

An investigation into the crash is ongoing.

But East Contra Costa Fire Department officials told ABC News they’d already been called out to that train crossing twice last year because it does not have a traffic guard. 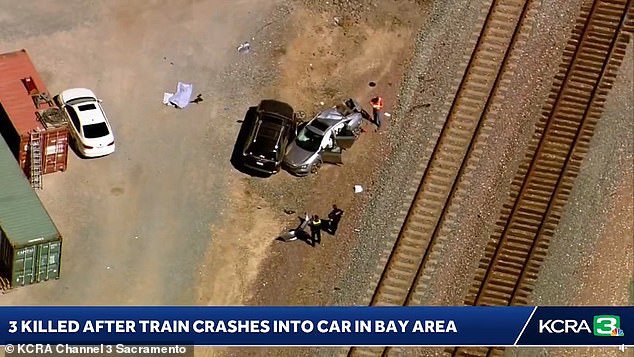 Three women were killed and four others – including a child – were injured when an Amtrak train slammed into a car at around 1pm in Brentwood, California 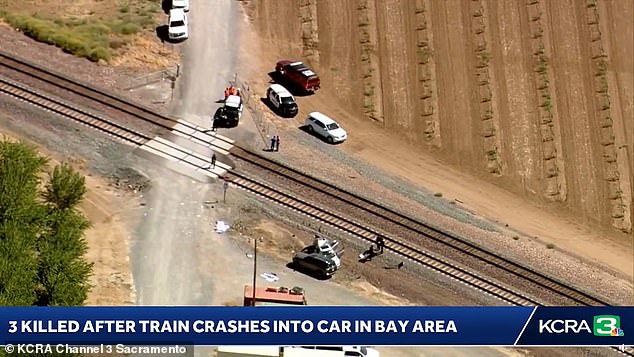 The crash occurred just about 300 feet from an outdoor fundraiser for a Brentwood resident who died less than a week ago, Mercury News reports.

Firefighters had already been called to the scene of the fundraiser to help someone who fainted, and as they were responding to that call, the Amtrak train slammed into the vehicle.

By the time they arrived, they only saw the aftermath of the fatal collision.

And Fatima Jimenez, who was attending the fundraiser, said she ran out because she thought it was her brother’s vehicle that was hit.

She arrived at the train tracks to find two women dead on the ground, along with a bloodied child, she told Mercury News.

She also said she helped someone else pull a man from the wreckage of the car, and noted that he appeared to have avoided a major injury.

‘People fainted when they heard what was going on,’ Jimenez recounted. ‘ It was chaotic. There are no words to describe it – I’m still in shock.’