It’s no holiday camp! Caravan parked in a North London garden advertised as a ‘self-contained garden studio flat’ will set you back £790-a-month

By Claire Toureille For Mailonline

London is known for its ruthless rental market, but this particular ‘property’ will come as particularly depressing news for those trying to secure a home in the capital.

A dated caravan, meant for touring holidays, that’s parked in a homeowner’s garden in Barnet, in North London, is currently being advertised to renters for a whopping £790 per month.

Described in the property advert as ‘a self-contained garden studio flat’, the caravan comes with a studio-style bedroom and kitchen, with a washing machine perched right next to the bed. 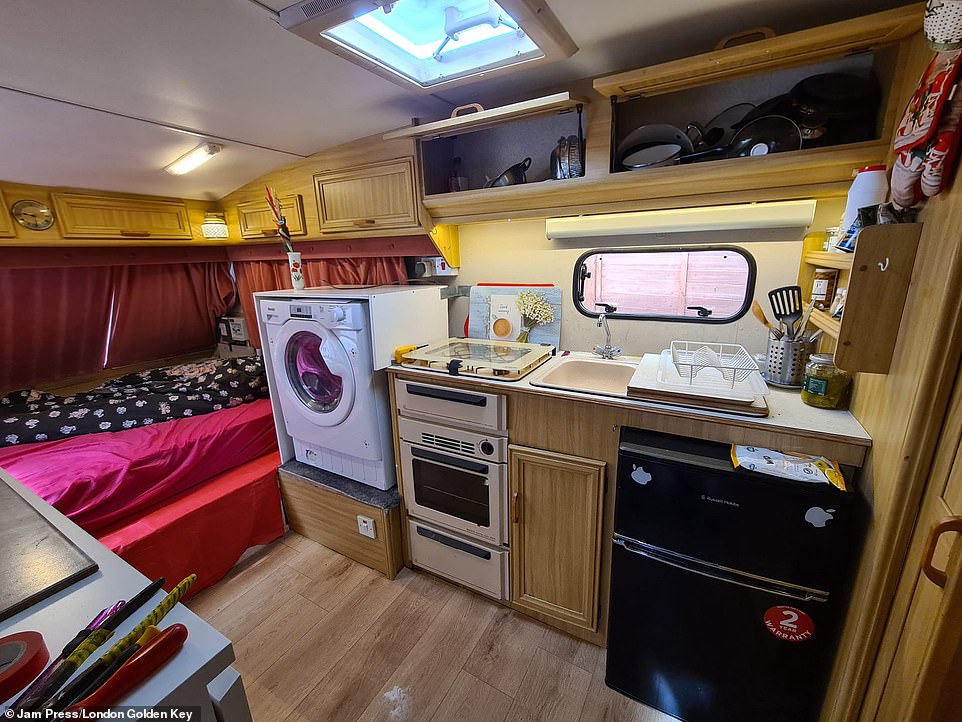 New low for London’s property market? The dated caravan is parked in a garden in Barnet, North London – and is on the rental market for £790 per month. Pictured: The caravan’s interior, with a kitchen and foldaway double bed 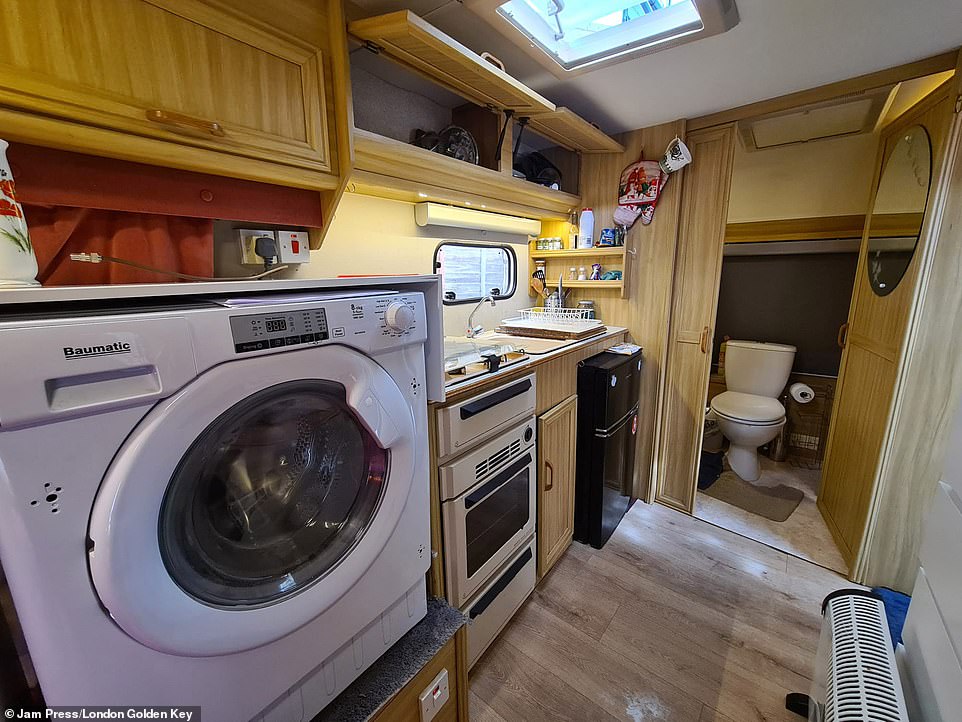 Suitable for a week’s holiday in Weymouth – but to live here permanently might be a struggle. The tiny accommodation comes with a small kitchen with a hob, an oven and a sink plus a washing machine and a separate toilet with a shower 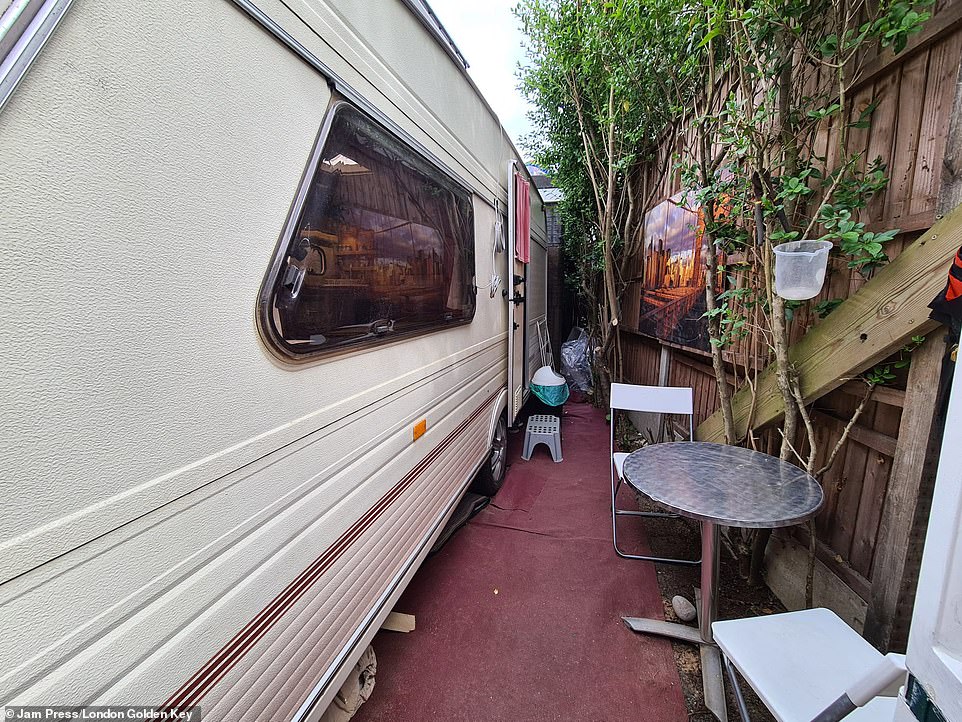 A small outdoor area comprising two chairs and a round table is available alongside the camper van. Owners added some décor by hanging a picture on their garden fence

To buy a caravan of a similar age outright on ebay, you’d pay around £2,000 – just two-and-a-half months’ rent for the rental being advertised.

The property, on Beechcroft Avenue, is advertised as ‘cute and available in the heart of Golders Green’ and ‘ideal for a single working professional’ – and it is significantly cheaper than the average Barnet rental, which is just shy of £2,000 a month, according to estate agent Foxtons.

Inside, a foldaway double bed – which becomes a seating area – is crammed into one end of the traditional caravan, with a washing machine installed directly next to it.

While the kitchen might have everything you need, there’s a compact oven with a hob on top, a small sink and a fridge, the very bijou space might get quickly get wearing.

Wrapped above the kitchen and bed is storage space via a series of cupboards, which anyone living here could make use of, given the lack of wardrobe or drawers. 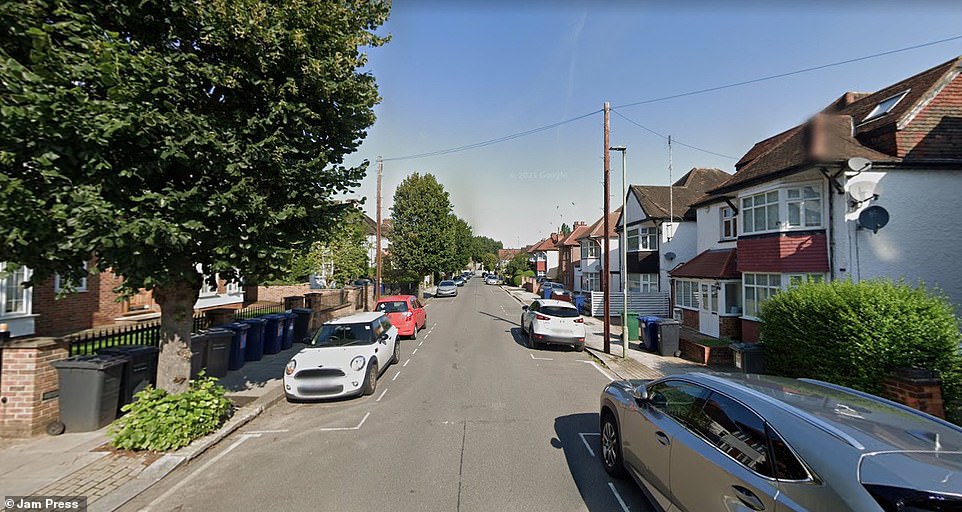 The garden where the camper is parked is located in a leafy part of Barnet in North London, only a few minutes away from the Tube – and it is significantly cheaper than the average Barnet rental, which is just shy of £2,000 a month, according to estate agent Foxtons 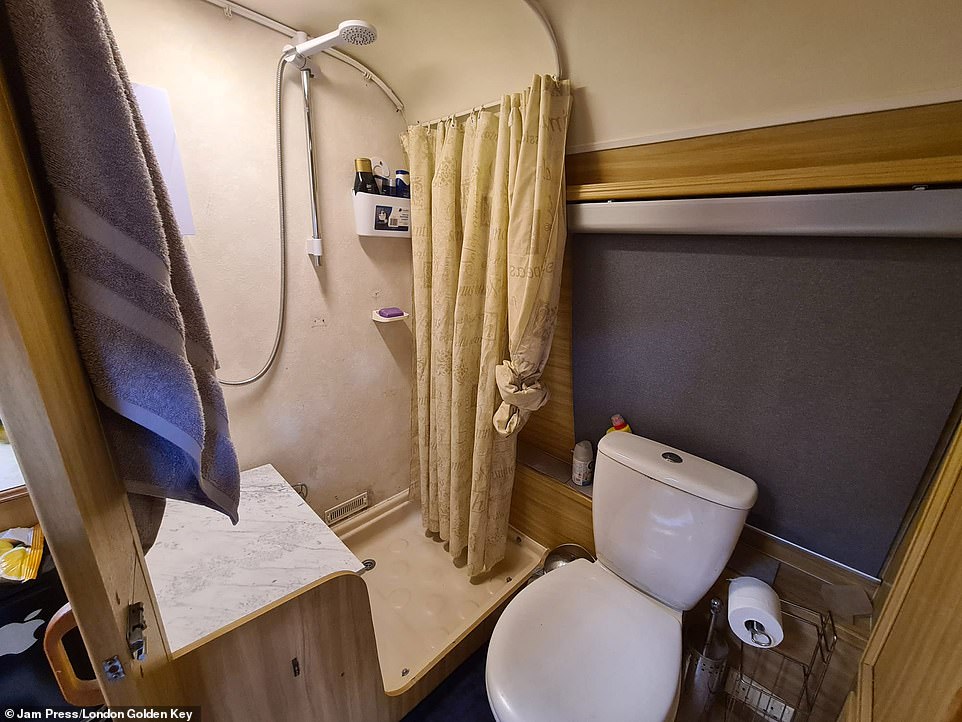 Compact: The camper has its own toilet and a shower and storage, which while small, is functional. It also comes with all bills and WiFi included in the rental cost – the van is not pet friendly and allows students 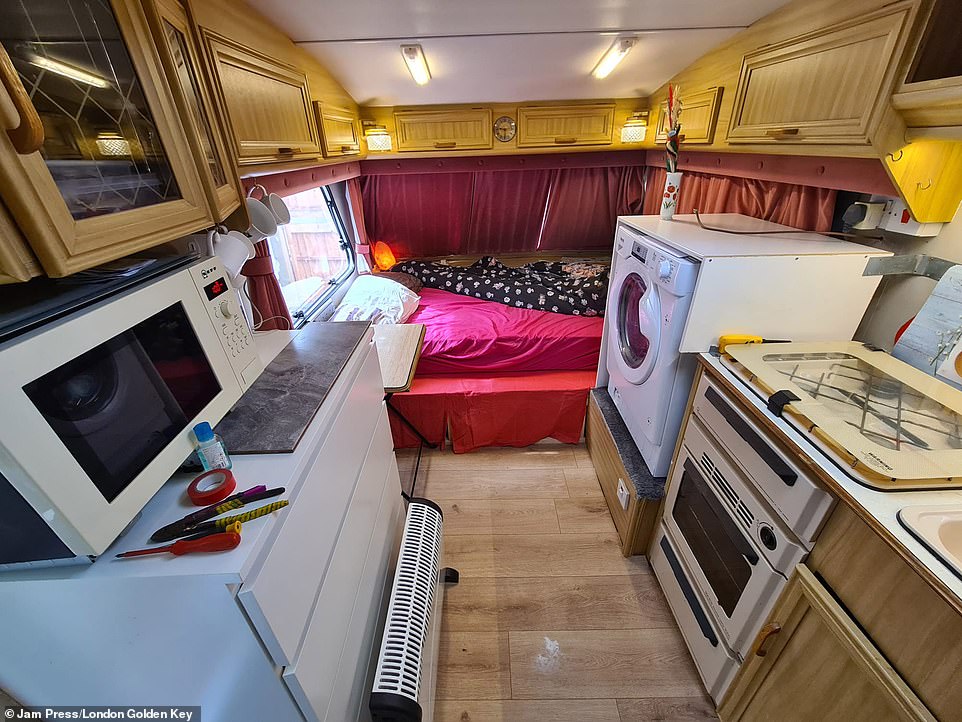 At the far end of the camper, which includes overhead storage and a microwave, the owners have installed a double bed for the sleeping quarters

Next to the entrance, a classic caravan door that splits in two, there’s a chest of drawers and a portable heater to keep those sleeping the property in the middle of winter warm at night.

At the other side of the caravan is a very compact bathroom, which contains a toilet, small shower, sink and more storage cabinets. Outside, sandwiched between the garden fence and the entrance to the mobile home, there is a table and chairs for the potential for some cramped outdoor dining.

However, all bills and Wifi are included for the price. The caravan requires a deposit of £911.53 which, equivalent to five weeks’ rent, is the maximum legally permitted.

Howeowners can legally rent out a caravan on their property as long as they’ve secured planning permission.

The minimum tenancy is a year – so you’ve got to be confident that caravan life is for you before signing the lease. The caravan is not pet friendly and allows students. 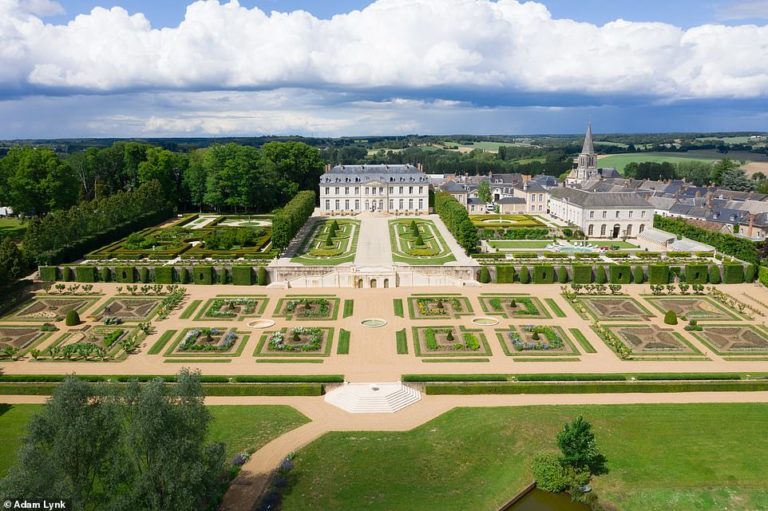 Advertisement They say time travel is impossible – yet recently I seemingly achieved it, going back to 18th-century France and living like a nobleman for a couple of days in a gigantic chateau, a 258-year-old Loire Valley pile where all your dreams of lazy days spent in plush, regal splendour come true. Welcome to Hotel… 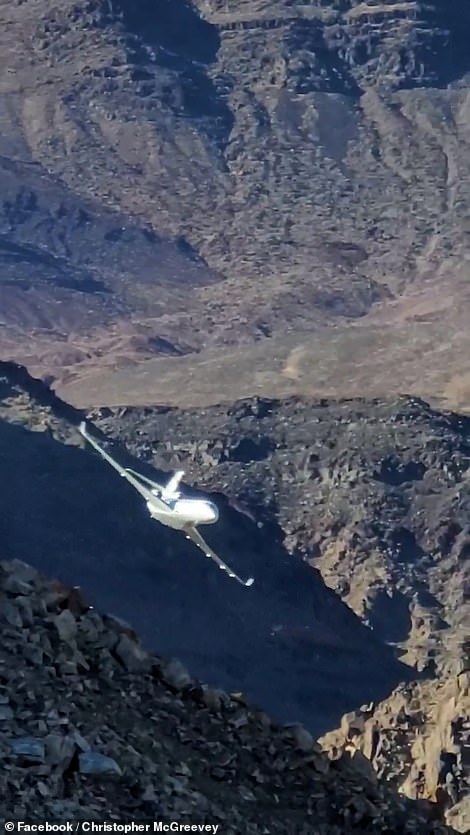 Advertisement Real life rebel pilot! Incredible moment a PRIVATE JET roars through a narrow pass in California’s ‘Star Wars Canyon’ Aviation photographer Christopher McGreevy captured the breathtaking flight of a Dassault Falcon 8X private jet through the narrow canyon  It is unclear who was flying the jet through the canyon, which is made from walls… 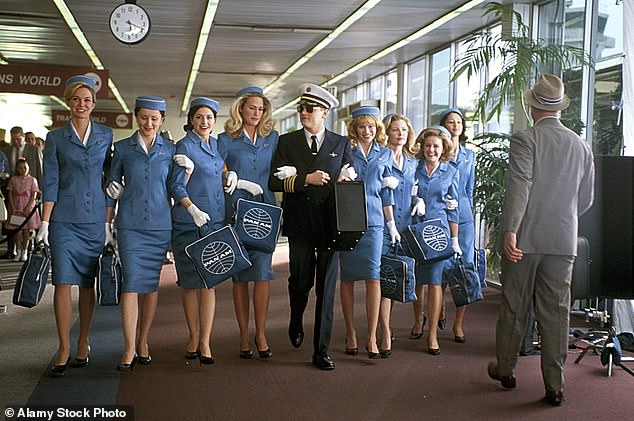 Advertisement A young woman with strawberry blonde hair and come-hither eyes slowly pulls down the zip on the front of her coat to reveal a uniform of red top and skirt. To a soundtrack of burlesque flute music, she seductively disrobes, removing first her top, then her skirt, flinging the latter stage left like a… 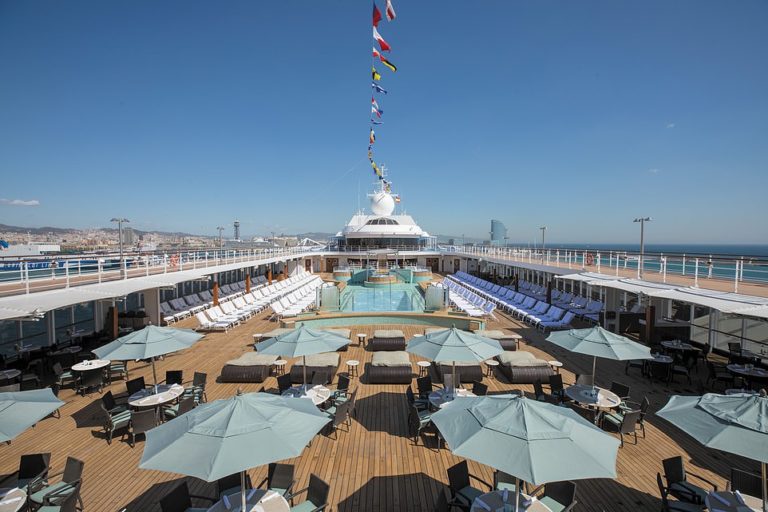 Advertisement For the fourth year running, a world cruise by Regent Seven Seas Cruises has sold out in record time, with the sailing being completely reserved prior to officially opening for bookings on June 15, 2022. The 2025 sailing, which at 150 nights is the longest in the cruise line’s history, had fares starting from… 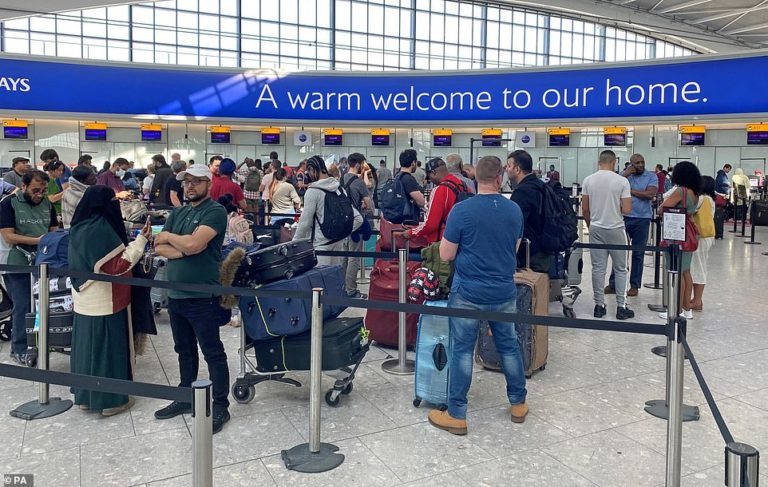 Advertisement Industry chiefs have warned British holidaymakers hoping to fly abroad at any time this year to brace for 12 months of travel hell due to unprecedented airline staff shortages caused by Covid self-isolation and mass layoffs during the pandemic. Experts said that airlines ‘are simply unable to cope with that demand due to a… 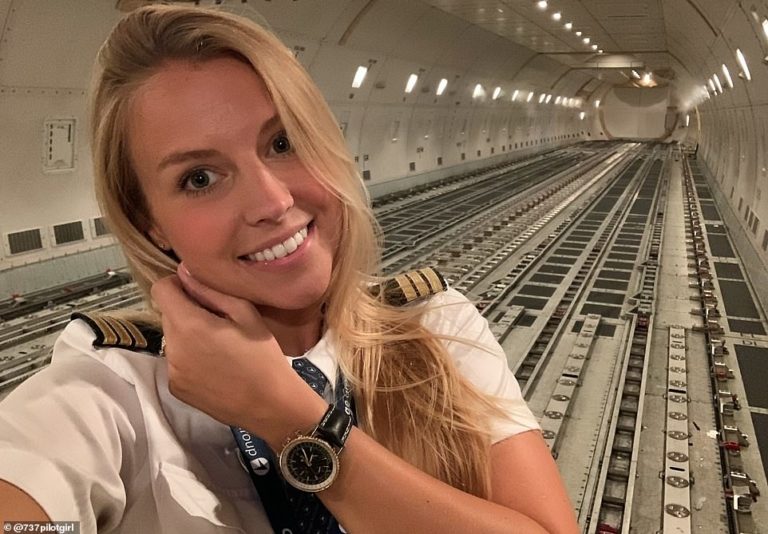 Advertisement Kim De Klop created an Instagram page for her friends and family, but it quickly took off. She now has 111,000 followers. But then, she’s no ordinary Instagrammer – she’s a pilot. And the pictures she posts give her followers a glimpse into her amazing high-flying, globe-trotting life. Belgian Kim is only 27 and,…