Canadian Prime Minister Justin Trudeau is facing backlash over his calls to implement a ‘national freeze’ on handgun ownership in his country in the wake of the mass shooting in Uvalde, Texas.

Critics claim his new proposed ban will do nothing to protect citizens as many guns ‘are already illegal’ and the ‘freeze’ doesn’t tackle the ‘root cause’ of the crime problem, which is gun smuggling.

Trudeau, 50, announced on Monday that his government will introduce the legislation to prevent people from buying and selling handguns anywhere in the country. If passed, the freeze on handguns is expected to take effect in the autumn.

Raquel Dancho, a conservative MP for Kildonan-St. Paul, lead the criticism, writing: ‘Today’s announcement fails to focus on the root cause of gun violence in our cities: Illegal guns smuggled into Canada by criminal gangs. The PM has had seven years to fix this serious issue, yet he continues to chase headlines and bury his head in the sand.’

Pierre Poilievre, a member of Parliament for Carleton, who is also running for the PM spot, called the move a ‘total failure’ and said ‘their useless registries [and] soft sentences for gun criminals make the problem worse.’

‘Respect law-abiding gun owners, put dangerous criminals behind bars, [and] stop gun smugglers at the border,’ he wrote on Twitter.

The Canadian government does not have a national firearm tracking system, so it is unclear the exact number of smuggled guns that are from the US.

However there are ‘more than 1,500 models and variants of assault-style firearms have been classified as prohibited,’ Canadian Border Patrol (CBP) told DailyMail.com in a statement on Tuesday.

‘All travelers must declare any firearms in their possession to a CBSA officer when seeking entry to Canada,’ CBP

However, the Toronto Police reported in 2020 that 85 percent of handguns taken off the streets were able to be traced back the US.

In addition, the CBP has seized 955 firearms – both restricted and non-restricted models – across 1,200 entry points so far in the 2021-2022 fiscal year, which ends in September, the agency reported. 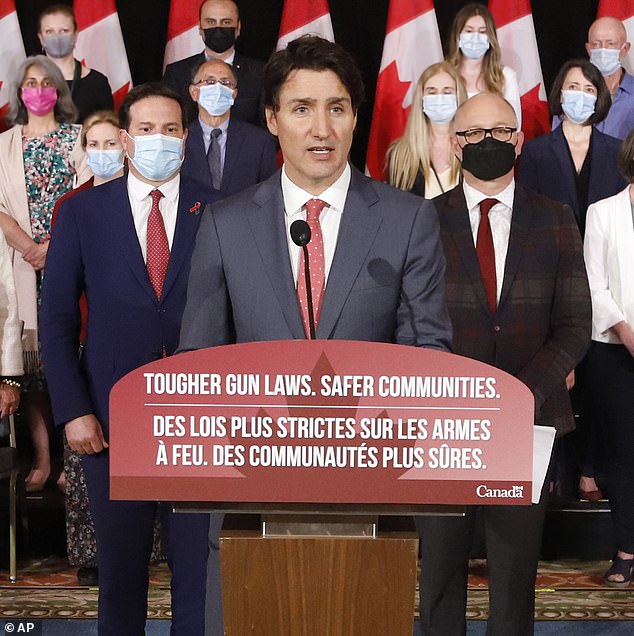 Canadian Prime Minister Justin Trudeau, 50, has been blasted over his handgun ban by critics who claim most crimes are committed using illegal weapons smuggled from the US 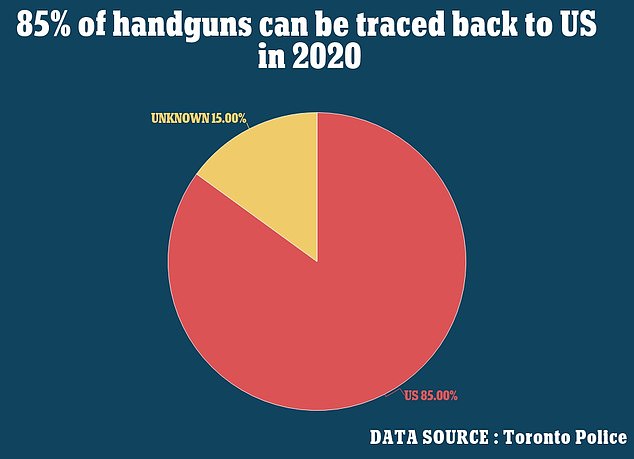 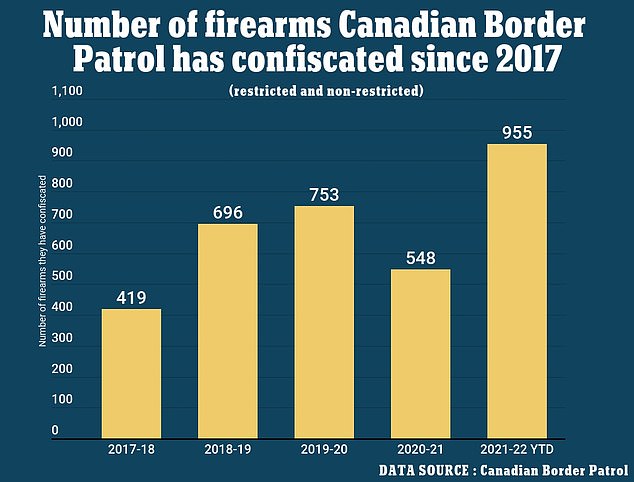 Despite not having a centralized database for all of Canada, CPB does track how many firearms – both restricted and non-restricted models – it confiscated at the border each fiscal year. So far throughout 2021-2022 year, which ends in September, CBP has taken 955 guns. The number skyrocketed 57 percent from the 2020-2021 year

With modern technology and the inability to be able to stop every vehicle at the border, CBP does use ‘contraband detection tools such as handheld devices, small scale and large-scale X-ray machines, and detector dogs’ to detect illegal guns, CBP said in a statement to DailyMail.com on Tuesday.

Just earlier this month, a drone carrying guns was intercepted in Port Lambton in Ontario after it hit a tree. The drone was carrying a shopping bag with nearly a dozen handguns, the Guardian reported.

When police recovered the shopping bag, they reportedly found the serial numbers on the guns – most of which were illegal to possess in Canada – were sanded off.

Many guns reportedly come into Canada through gangs and criminals, the Toronto City News reported.

‘They’re being smuggled in because people that want to possess them do not register firearms. They are criminals, the criminal entity of the city, mainly gangs, but there are illegal firearms that are much easier to acquire from the United States,’ Toronto Police Inspector Joe Matthews told the Toronto City News.

‘They come in in many different ways. Transport truck, by plane, private citizens and their vehicles can smuggle guns into the country. As much as you can imagine. That’s the way that they can come in.

Former gang member, Marcell Wilson, who was a former high-ranking official in South American cartels, said he and others used the ‘car method’ most often, but would resort to kidnapping and exploiting citizens to successfully carry weapons over the border.

‘How many Canadians realize the government’s handgun ban is a clear attempt by Trudeau to import American culture wars into Canada? The majority of guns being used in crimes are illegally acquired,’ he wrote.

Editor-in-Chief of the Post Millennial, Libby Emmons, agreed, writing on her own account: ‘In Canada, they’re going to ban guns that are already illegal, which cops say will not actually have an impact on crime, since gun crimes are committed with smuggled guns.’

Canada banned the sale and use of some 1,500 models of assault weapons, like the AR-15 rifle, two years ago. Shortly afterwards, gun supporters marched to Parliament Hill during the Canadian Coalition for Firearm Rights in protest to the ban. 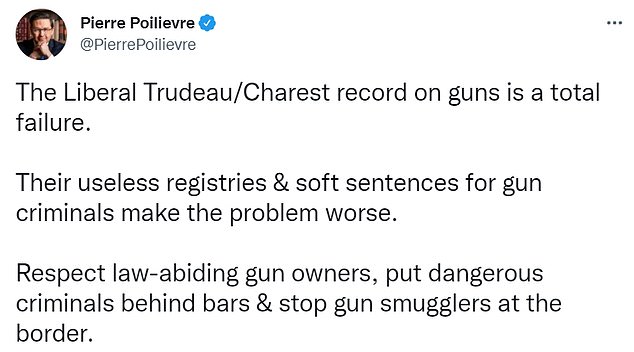 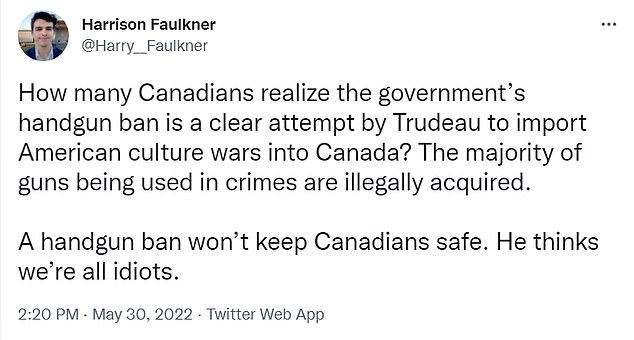 Wilson, the one-time gang member, who now runs One By One Movement, a ‘thinktank’ that works to curb extreme violence in Toronto, said the ‘open border’ leaves gangs and criminals with an expansive area to bring in illegal weapons, including through indigenous reserves.

‘There were areas along the border where there are Indigenous reserves and we would exploit them to bring weapons in,’ Wilson told Toronto City News. ‘There are literally areas that you could throw a bag over the border and pick it up.’

Another smuggler also said they reportedly like to use older people in their operations, as the younger crowd ‘draws attention to themselves,’ an unidentified former smuggler told the VeraCity: The Gun Chase, according to the Toronto City News.

‘We were looking for more seasoned people. People who traveled to the States a lot anyways, whether to visit family or shop. A lot of older people,’ he said. ‘We always told them [the contraband] was just money.’

He also said gun smugglers have advanced their technology, including using tricked-out cars and drones to transport the weapons over the border.

Wilson said some cars have ‘special compartments where the driver ‘might have to turn the volume knob three times to the left and hit the horn and literally your dashboard will drop out and there will be a compartment with like some special lining that the scanners couldn’t read.’ 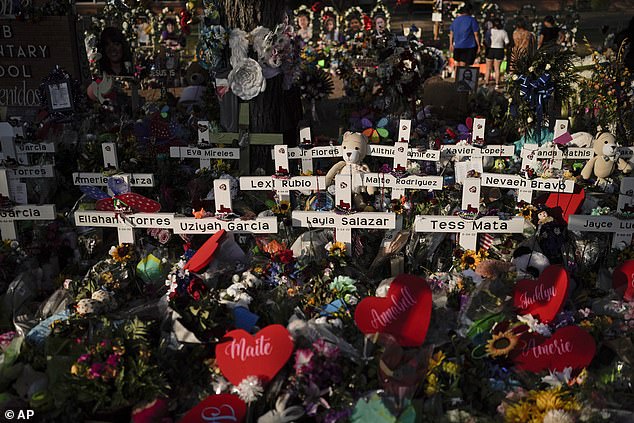 Trudeau’s gun ban came after 19 children and two teachers were killed in Uvalde, Texas, in a shooting at Robb Elementary School last week

‘They’re becoming more sophisticated in the methodology, but it’s kind of still the same,’ he said.

‘They’re so small, the guns, that if you purchase 10 or 20 of those guns, you’re making a massive amount of money if you can get them into this province, into our country. That’s the value, the street value of guns,’ he said on the TV program.

He said the majority of guns coming in Ontario were coming from those traveling on Interstate 75, which leads all the way to Florida.

DailyMail.com has reached out to Trudeau’s office for comment.