Donald Trump said Saturday that Elon Musk previously told him that he voted for him despite the Tesla CEO claiming last month that his ballot for Mayra Flores was the first time he ever voted GOP.

‘You know he said the other day, ‘Oh, I’ve never voted for a Republican.’ I said, ‘I didn’t know that. He told me he voted for me,’ Trump said at his Alaska rally when speaking about Musk’s Twitter deal falling through.

‘So he’s another bulls*** artist,’ the former president said.

‘But he’s not gonna be buying [Twitter]. Although he might later, who the hell knows what’s going to happen,’ he added in the midst of his hour-and-a-half remarks in Anchorage, Alaska on Saturday.

Musk, who now lives in Texas, said that he voted Republican for the first time in June’s special election when he cast his ballot for Flores in her bid for the 34th congressional seat against Democrat Dan Sanchez.

When a Twitter account called Tesla Owners Silicon Valley asked Musk if he was voting Republican in the 2024 presidential election, the Tesla CEO replied ‘tbd.’

Trump, however, suggested that Musk is a liar, saying that the SpaceX CEO told him that he cast his ballot for him before. 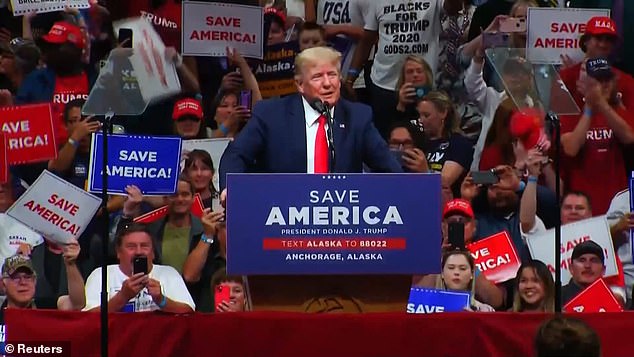 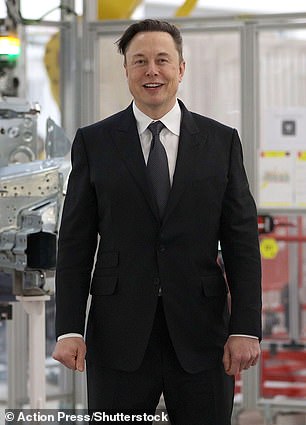 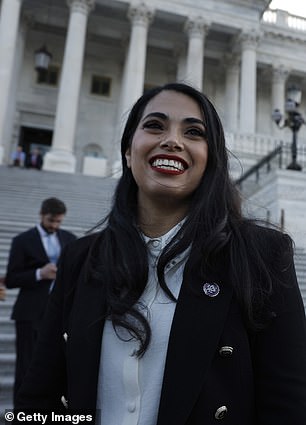 The former president almost promoted his social media site Truth Social when slamming Musk for letting his bid to buy Twitter fall through.

‘Another one of our highest priorities under a Republican Congress will be to stop left-wing censorship and restore free speech in America,’ Trump said to his supporters at the Alaska Airlines Center on Sautrday.

‘Elon is not gonna buy Twitter,’ he said. ‘Where did you hear that before? From me,’ he said.

Trump’s revenge rallies made a stop in Alaska to stump for the candidate taking on moderate Republican Senator Lisa Murkowski, as well as Sarah Palin and the incumbent Governor Mike Dunleavy.

Trump said he was fulfilling a promise to supporters in the Last Frontier State by holding his rally there on Saturday at the Alaska Airlines Center.

‘You have a lousy senator don’t you?’ Trump added of Murkowski. ‘But we’re going to do something about that.’

‘You’re going to fire your RINO senator – she’s worse than a RINO – Lisa Murkowski. She is the worst. I rate her No. 1 bad,’ he said.

Trump has made clear that his goal in the 2022 election is to boot from office all incumbents he considers RINOs, which has become a moniker for anti-MAGA Republicans and stands for ‘Republican In Name Only.’

Murkowski is one of the seven Republican senators who voted to convict Trump in his second impeachment trial after the January 6, 2021 Capitol attack, which a select committee is still investigating in Congress. 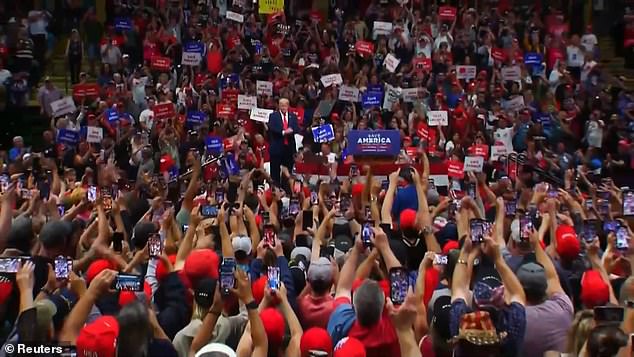 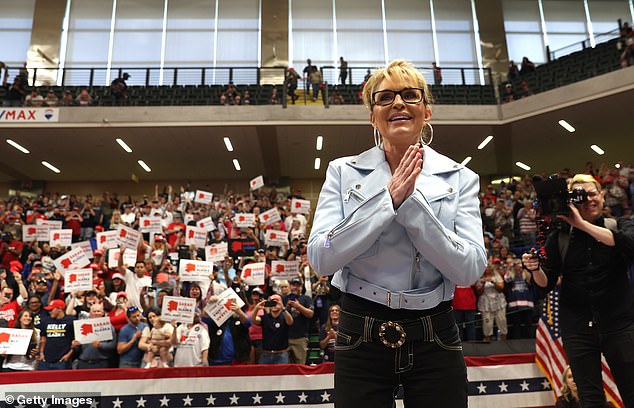 Palin (pictured at the rally Saturday, July 9 in Anchorage) is running to take the u.S. House seat left vacant by Representative Don Young with his death in March 2022

This vote and her status as a moderate GOP senator makes her a RINO in Trump world.

He called Murkowksi ‘one of the most destructive two-faced senators’ of all those who he feels turned against him.

Now, Trump has made it a point to rally against those Republicans who voted for his impeachment and conviction and has backed their competitors in the 2022 midterms.

This includes Kelly Tshibaka, who is taking on Murkowski in the primary.

He is also supporting Sarah Palin in her bid for the U.S. House seat left vacant by late Representative Don Young.

‘You’re going to send the great, legendary Sarah Palin to the U.S. House of Representatives. Incredible woman,’ he said before thanking Palin for endorsing him back in 2016.

‘I’m here to say I like you best. I know your opponents and I like you way better,’ Trump said of the former Alaska governor. 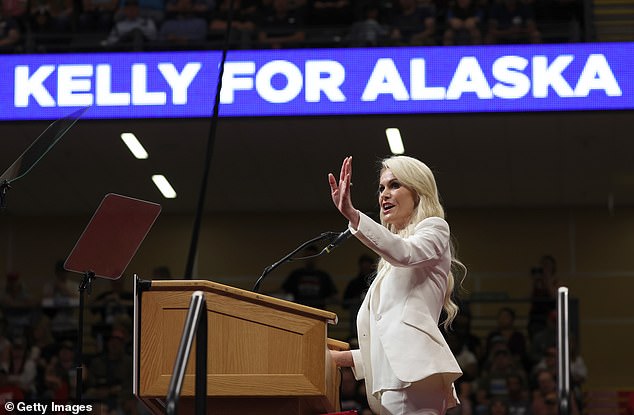 Trump said of his visit to Anchorage: ‘I’m here for two reasons, to support great candidates and fulfill my promise to Alaska – that I was going to come here. You know that.’

‘You voted for me twice and I won in a landslide both times. And now I’m voting for you. That’s why I’m here,’ he added.

The Alaska Airlines Center has a capacity of 6,000 people – 1,000 standing and 5,000 sitting. Nearly all seats were filled, except for many that had obstructed views behind the press risers.

Just minutes before Trump’s arrival, the ticker for a crowd count showed nearly 5,000 people had been admitted.

‘I like Alaska,’ Trump said during one of many ‘U-S-A’ chants shouted Saturday afternoon.

The former president’s supporters in Alaska expressed a general sense of disenfranchisement with Murkowski, one of those most moderate Republican lawmakers in the U.S. Senate.

‘She doesn’t represent Alaskans anymore – what we want,’ a woman, who traveled from a town around Seward, Alaska told DailyMail.com as she waited to gain entrance to the rally.

Trump jetted to the Last Frontier State directly from Las Vegas, Nevada after holding a rally there Friday evening to stump for Tshibaka, Palin and Governor Mike Dunleavy in his bid for reelection to the governor’s mansion.

Several other rally goers and Alaskans from all over the state dining in Anchorage over the weekend agreed that Murkowski was not representative of the Republican Party. 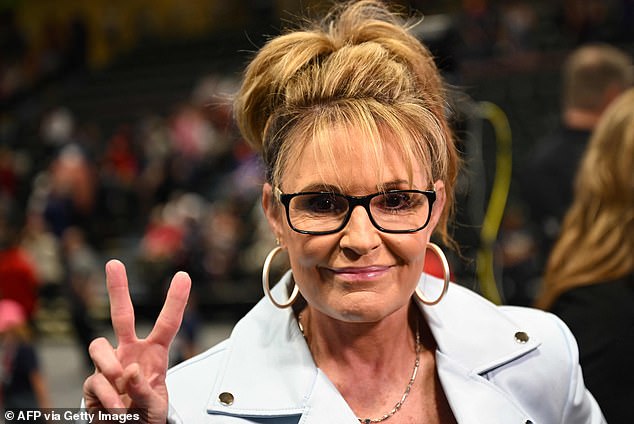 Palin received a slew of warm welcomes from the pro-Trump crowd on Saturday, July 9, 2022 in Anchorage, Alaska

Palin received a slew of warm welcomes from the pro-Trump crowd on Saturday, July 9, 2022 in Anchorage, Alaska 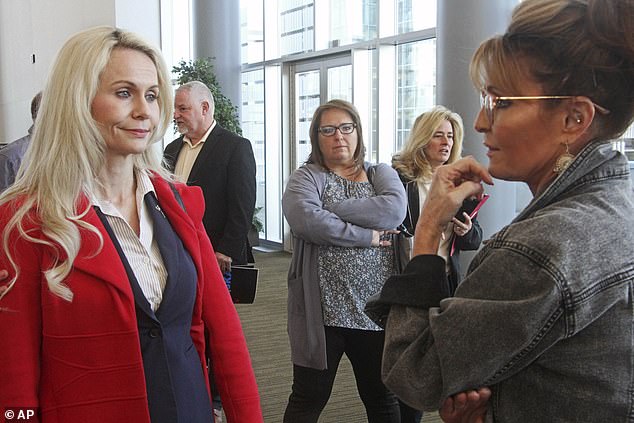 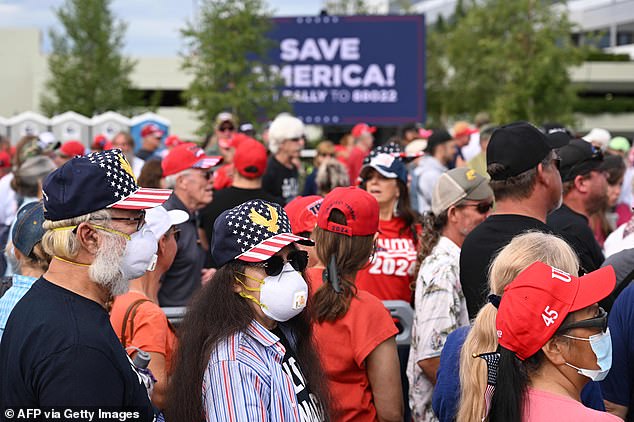 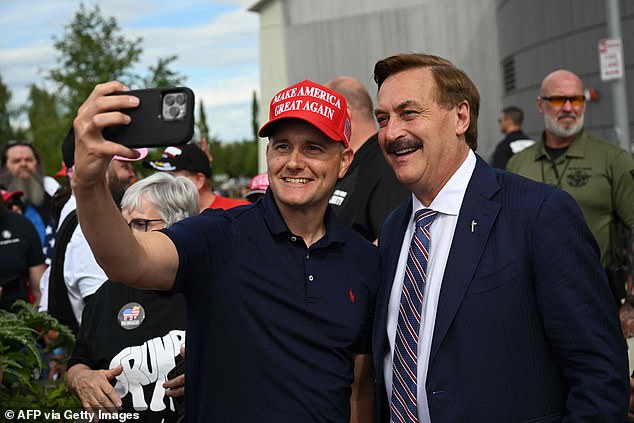 One Democratic Anchorage resident who identified himself as only Dan told DailyMail.com while dining at Snow City Cafe Saturday morning that he would cast his ballot for Murkowski now that the state has switched over to an open election system. The 47-year-old said that it’s better to have an ‘anti-Trump’ Republican in Congress than risk wasting his vote on a Democrat who would likely go on to ‘lose the general election.’

A handful of voters, most of whom did not want to identify themselves, told DailyMail.com that while they support Trump and Palin, they would still cast their ballot for Murkowski in the primary election.

An Alaska Survey Research poll taken July 2-5 shows Murkowski with 52 percent support to Tshibaka’s 48 percent. But an average of the polling in the state shows the two slightly closer with just 3 percent separating the two.

Begich has capital among Alaska Republicans. He served as a co-chair for Young’s final reelection campaign in 2020.

Supporters in the stands of the Alaska Airlines Center on the campus of the University of Alaska Anchorage cheered wildly for Palin as she entered the arena a few hours before Trump’s arrival time. 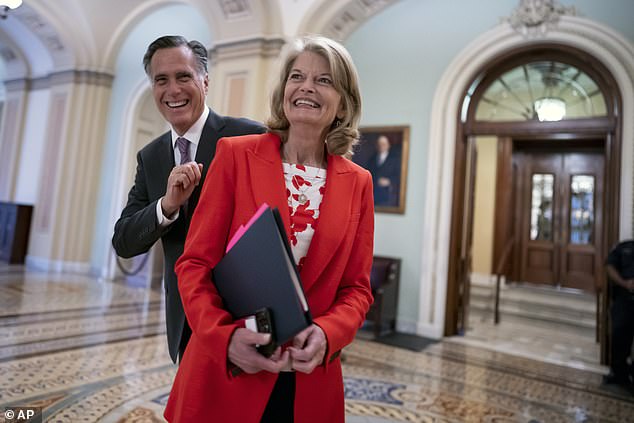 Trump supporters in Alaska expressed to DailyMail.com and in their jeers a general sense of disenfranchisement with moderate U.S. Senator Lisa Murkowski 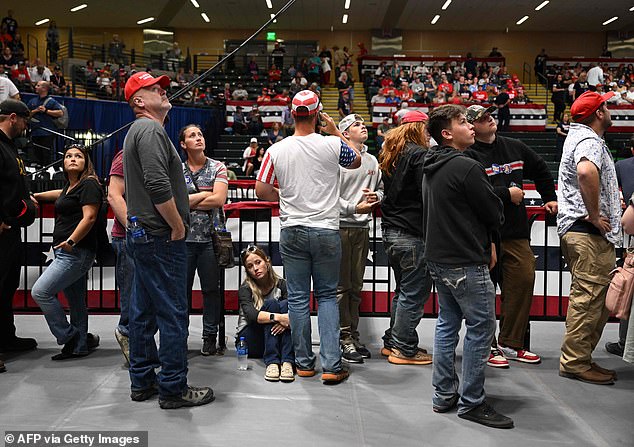 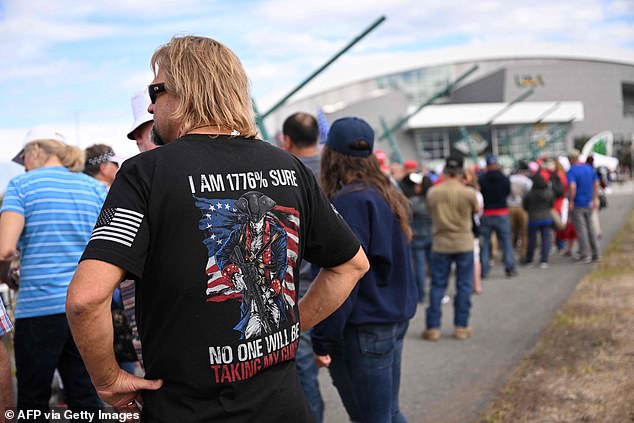 Trump backed Palin in her special election run to replace late Representative Young, who was the U.S. congressman for Alaska’s at-large House district from 1973 until his death in March 2022.

The former president is finally making a trek to the 49th state now that the House, one Senate and the governor’s seat are all open simultaneously. The move also comes as part of his revenge tour as he pushes his 2022 midterm candidates especially hard against incumbents who voted for his impeachment.

Current junior Senator Dan Sullivan was reelected for a second term in 2020.

Trump supporters in Alaska are trying to once again propel Palin to office – she served as governor from 2006-2009 and mayor of Wasilla, Alaska from 1996 to 2002.

The Alaska primary election will be held later in the summer on August 16 before November’s primaries will decide who will serve Alaska’s at-large House district as well as if Murkowski will continue to represent the state in the Senate and if Dunleavy will keep his seat in the governor’s mansion.

Murkowski is the second-most senior Republican woman senator – falling behind only fellow moderate Susan Collins of Maine. Both hold crucial swing votes in the upper chamber, especially with a 50-50 split Senate with a Democrat tie-breaker.

The daughter of former Alaskan governor and U.S. Senator Frank Murkowski, the senior senator was controversially first appointed to her seat in December 2002 by her father when he resigned to become governor of the state.

She completed her father’s term in January 2005 and started her first full term, which she was elected for in November 2004.

Despite the perceived nepotism, Murkowski, 65, is a widely popular name in Alaska – and she likely would have risen to the Senate even if her father did not appoint her to the post. She is only the second ever U.S. senator, after Strom Thurmond in 1954, to be elected by write-in vote in the 2010 election.

Murkowski is now looking to earn a fourth term in office – but it’s looking increasingly likely that she could be booted from her seat.

August’s primary elections are the first Murkowski has to face since she voted to convict Trump in his second impeachment trial. This led to Murkowski’s censure by the Alaska Republican Party.