Residents of Victoria and New South Wales have been warned to brace for a potential tornado threat – as Australia’s east coast is swamped by rain.

Sky News meteorologist Alison Osborne said towns in the north-west of Victoria are at risk of a ‘tornadic supercell’ system on Thursday afternoon.

Echuca, Swan Hill and Mildura are at risk and the dangerous weather system could also extend into southern NSW.

‘That storm threat will rapidly ease into the early hours of (Friday) morning. It becomes less intense but more broad.’ 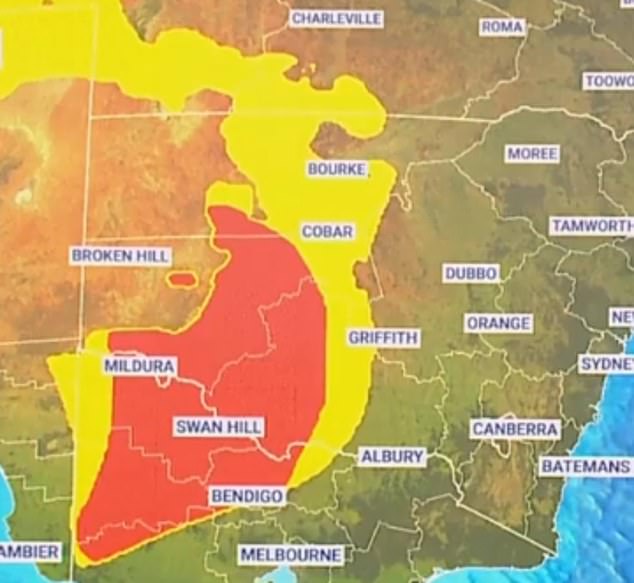 Sky News weather has warned a possible ‘tornadic supercell’ could hit parts of NSw and Victoria on Thursday afternoon (pictured, red zones are most likely to be hit by severe tornado conditions, yellow are less likely) 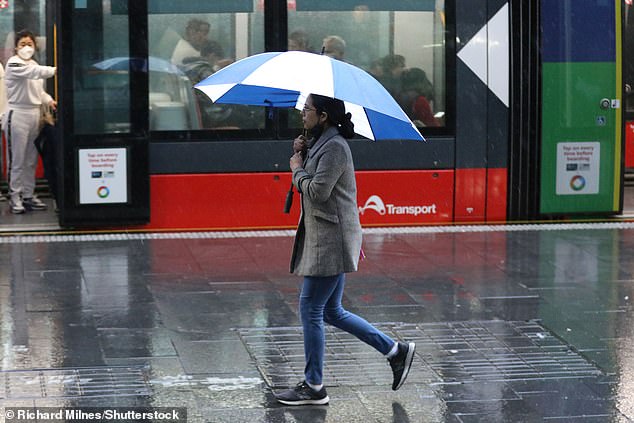 Three wet weather system will bring heavy rain to NSW and Victoria over the weekend (pictured, woman walking through the rain in Melbourne)

Forecasts show regions from NSW’s Cobar down the border to Victoria’s Mt Gambier are most likely to cop the dangerous weather.

Residents in southwest Queensland, eastern SA and most of central NSW and Victoria should also be on alert.

On Friday, when the system dies down, the zone for less severe tornadic conditions covers most of NSW, Victoria and southwest Queensland.

A monster wet weather system saw a rain band form over Australia’s eastern coast from the Gold Coast down to south Victoria on Thursday morning.

Rain is expected to briefly clear on Thursday afternoon before a new system is pushed eastward from WA, over SA and into NSW and Victoria, building as it moves along. 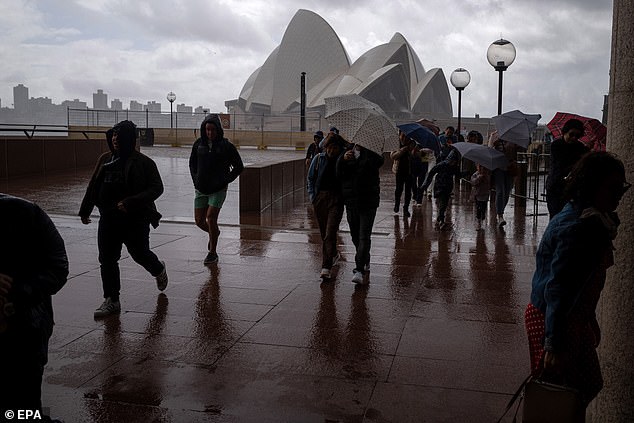 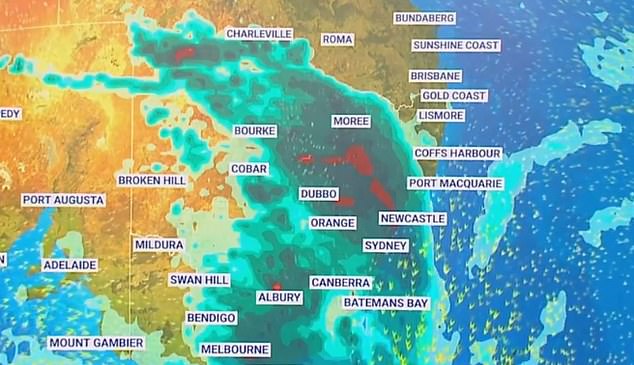 The storm will also bring a cold front which means a chilly start to the weekend.

A third storm system will re-intensify rain in NSW and Victoria on Saturday and Sunday.

The storms are expected to worsen from Saturday afternoon as a belt of storms form from southwest Queensland, stretching over central NSW, finishing on NSW’s coast.

The low pressure system is forecast to bring particularly heavy rain to Bourke, Sydney and Bathurst.

Bourke already received a month’s worth of rain in just one day on Wednesday with over 39mm pouring over the outback town.

The three storms will bring Sydney’s total rainfall this year to the highest ever recorded, smashing the previous all-time record of 2,194mm set in 1950. 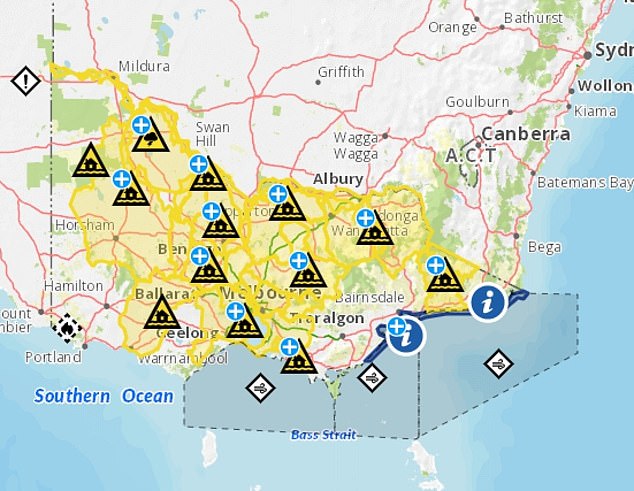 The Bureau of Meteorology warned the record-breaking rain means several communities are at risk of flooding again with catchments still bursting from floods just a few weeks ago.

‘We’ll start to see more of a flash flood risk as well as riverine flood risk over the coming days,’ Gabrielle Woodhouse from the Bureau of Meteorology said.

‘There is a lot of rain and… it’s falling on very, very wet catchments.’

Some flooded catchments are predicted to see 100mm of rain.

Several flood warnings have already been issued for NSW’s inland catchments but, as of midday Thursday, none have been given an evacuation order.

Residents near the Namoi, Darling, Culgoa, Lachlan, Birrie, Bokhara, Bogan, Macquarie, Murray, Edward and Barwon rivers have been warned to keep watch for signs of flooding. 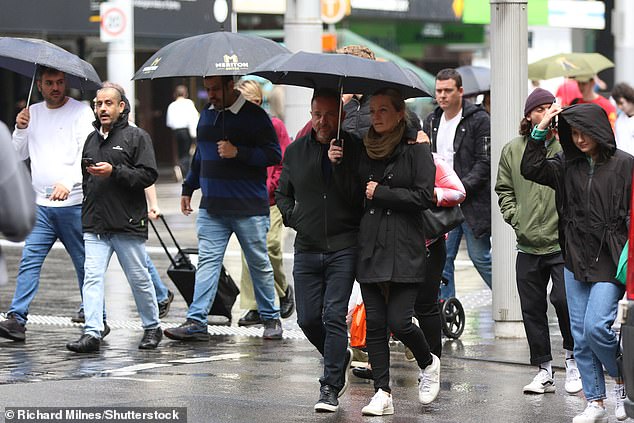 The heavy rain is expected to ease in most major cities by mid next week (pictured, pedestrians in Sydney) 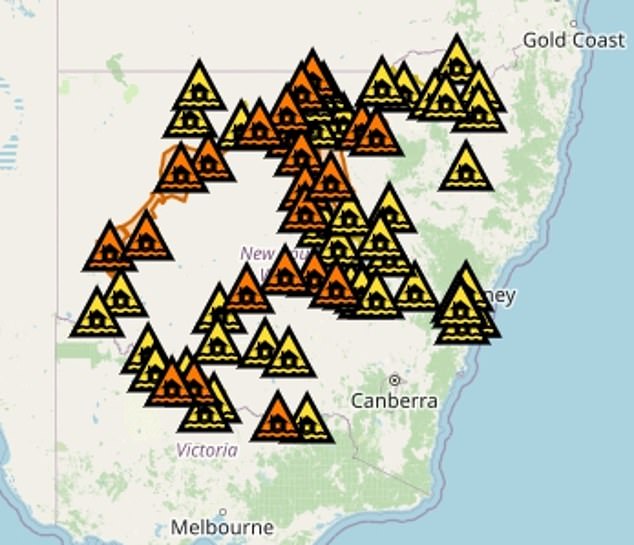 The SES has stationed rescue teams in communities at a high risk of flooding in case of an emergency.

They have urged people in flooded areas to avoid driving through floodwater.

Multiple inland dams are full or above capacity including Burrendong at 118 per cent, Carcoar at just over 100 per cent, and Glennies Creek Dam in the Hunter region which are also just over capacity.

Rain is expected to ease for most major cities by mid next week.