VB the Baywatch babe! Victoria Beckham, 48, looks sensational in a red triangle bikini as she tops up her tan on £1.6m-a-week superyacht in Sardinia

Victoria Beckham was giving Pamela Anderson a run for her money when she channelled Baywatch vibes in a skimpy red triangle bikini in Sardinia on Thursday.

Sporting an unusually colourful look, Victoria, 48, looked absolutely incredible in the two-piece as she carried a matching red towel in hand while on the deck alongside her husband David, 47.

She wore her brunette locks down and in a sleek style and kept out the sun in a baseball cap while on a superyacht which costs a huge £1.6m a week to charter.

VB the Baywatch babe! Victoria Beckham, 48, looked sensational in a red triangle bikini as she topped up her tan on £1.6m-a-week superyacht in Sardinia on Thursday 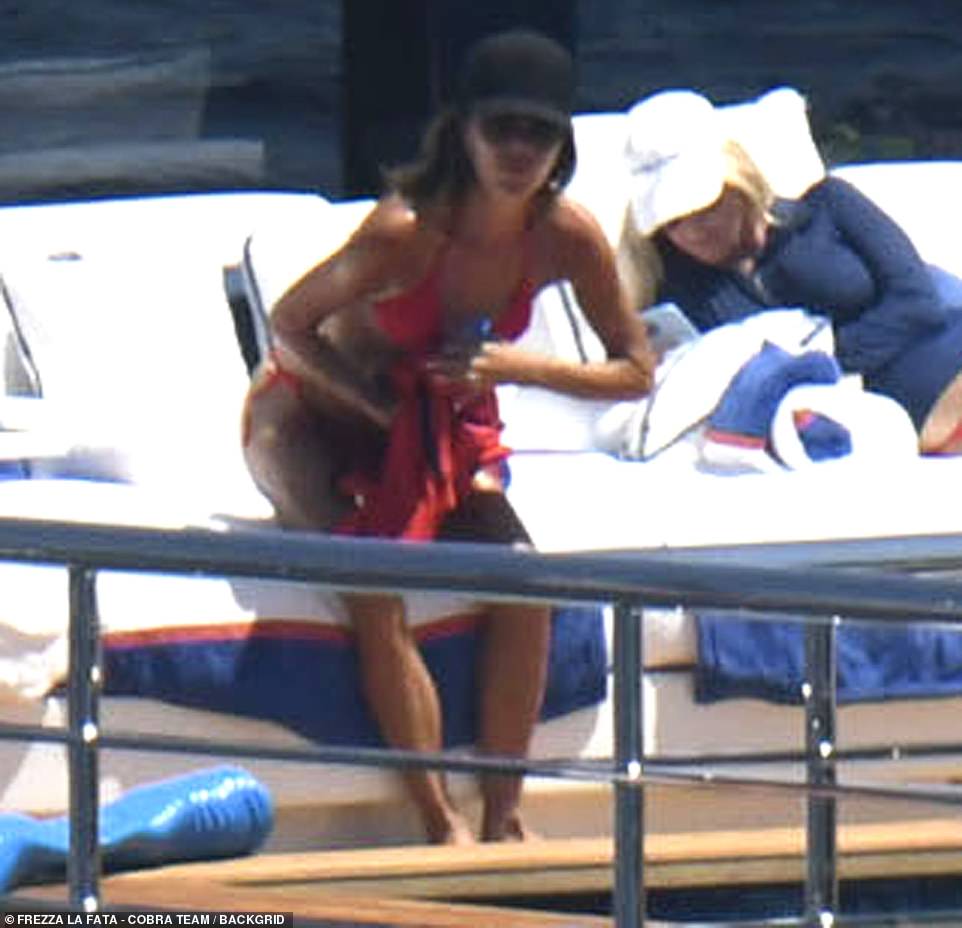 On her way to Malibu? Victoria Beckham was giving Pamela Anderson a run for her money when she channelled Baywatch vibes

Victoria made sure she kept hydrated while enjoying some downtime on the vessel before enjoying some rest and relaxation on a lounger and later getting changed into a stunning green dress.

Clearly Sardinia is the place to be as singer Adele is also holidaying in the same location.

Meanwhile, Victoria wasn’t the only one looking incredible on board the yacht as her handsome husband David was also showing off his incredible body in his swimming shorts. 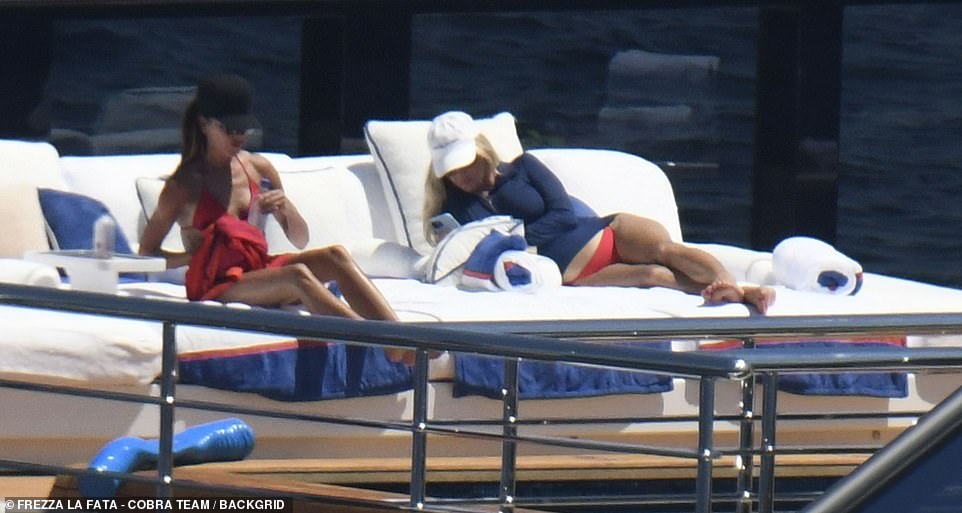 As you’ve never seen her before: Victoria made sure she kept hydrated while enjoying some downtime on the vessel before enjoying some rest and relaxation on a lounger 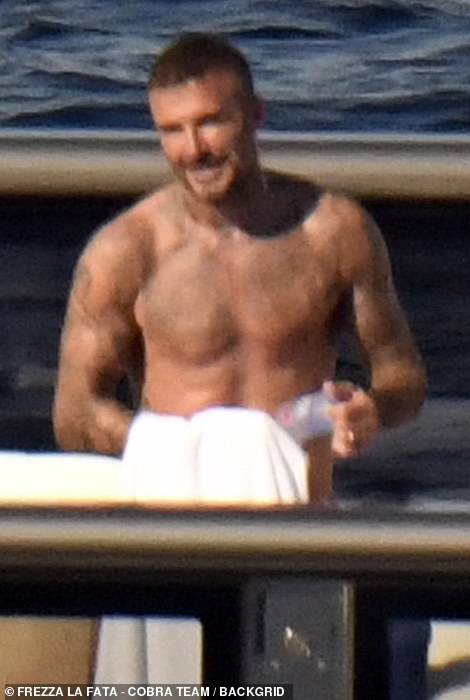 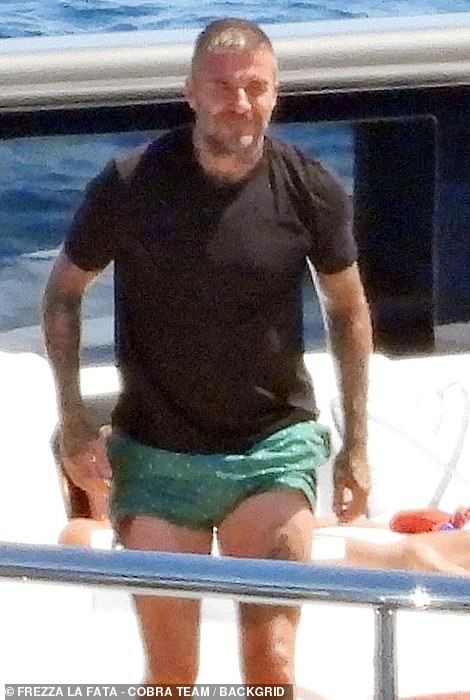 Swoon! Meanwhile, Victoria wasn’t the only one looking incredible on board the yacht as her handsome husband David was also showing off his incredible body in his swimming shorts

Wearing a big smile on his face, David’s muscles were clear to see – and it’s fair to say that Victoria is a big fan of his looks herself.

Earlier in the week, she shared a picture of him in his shorts on Instagram, simply writing: ‘You’re welcome.’

David and son Cruz, 17, enjoyed a thrill-seeking jet-ski ride and were seen navigating their way over the waves. Cruz’s girlfriend Tana Holding has also joined them on the family trip.

She looks amazing: Victoria looked every inch the fashion queen in her red two-piece after wearing an incredible green number,  (left)

Last month, Cruz was seen enjoying a night out in London pub Alice House in Queen’s Park with Tana and is believed to have met her earlier this year.

A source told The Sun: ‘They make a really lovely couple and she is down-to-earth and really fun. She is not fazed by Cruz’s fame and where he comes from. It is early days but Cruz seems smitten with Tana.’

Cruz recently split from his ex-girlfriend Bliss Chapman, according to reports. 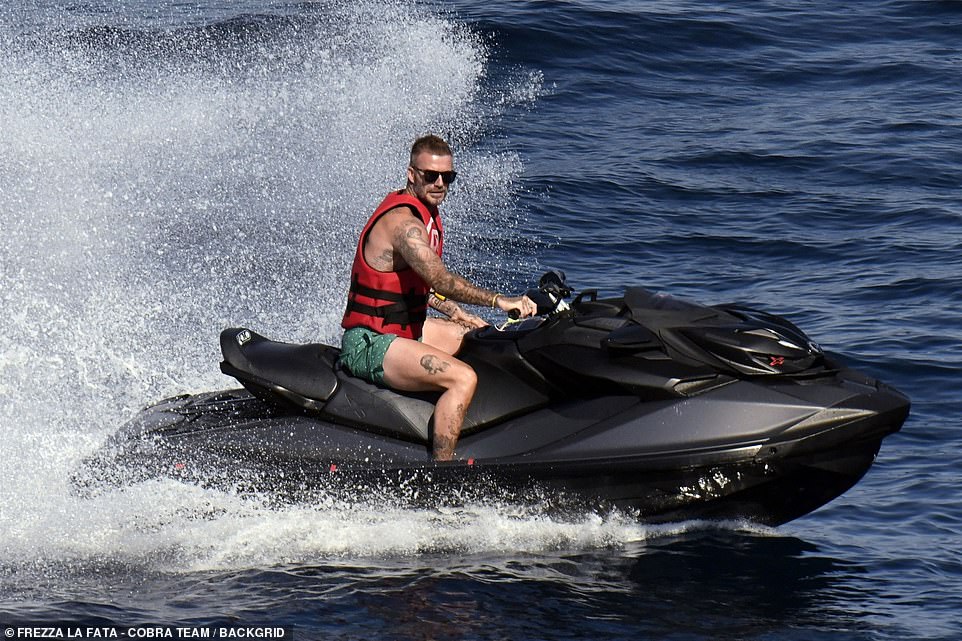 Beckham for Bond! The sportsman whizzed through the water with ease as he boarded a jet ski

The couple were in a relationship for 18 months but reportedly decided to go their separate ways in March.

Victoria and Bliss’s mother Rosemary Ferguson, a model turned nutritionist, are good friends and the reason the youngsters met in the first place.

A source told The Mail on Sunday: ‘Cruz and Bliss are both only young but they had been together for a quite a while, particularly for two teenagers.

‘But they decided to end things. The Beckhams loved Bliss, especially Victoria. Cruz’s older brothers Brooklyn and Romeo thought it was all lovely too.

‘Cruz now has a music career to launch and when the time is right that will mean travelling across the globe.’