A man in a suburb of the Dallas-Fort Worth area of Texas was recorded, allegedly being beaten 16 times with a flashlight, leaving him with severe injuries. He’s filed a federal lawsuit against two police officers involved, claiming excessive use of force.

Police officers were dispatched to the home of Clinton Grimsley, of Kennedale, in April 2020, after receiving calls that he was starting fires and making noise by beating an object on his front porch, according to a lawsuit filed in Tarrant County and obtained by DailyMail.com.

Upon arriving at Grimsley’s home, two police officers ordered the suspect to drop a toy sword he was holding and to raise his hands. Grimsley initially complied, following subsequent orders to sit on the porch before being patted down for weapons.

After the two cops found a pocketknife, they started to handcuff Grimsley, who – with one arm cuffed – ran away from them out fear of being hurt by the officers, according to the lawsuit.

A third officer drove up and aimed his gun at Grimsley before ordering him to get on the ground and to show his hands. 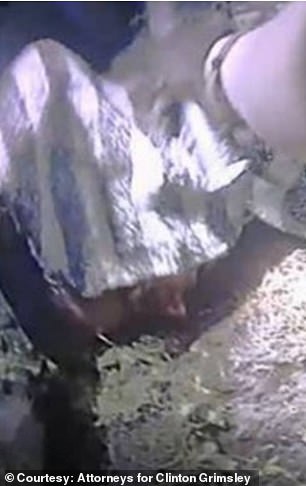 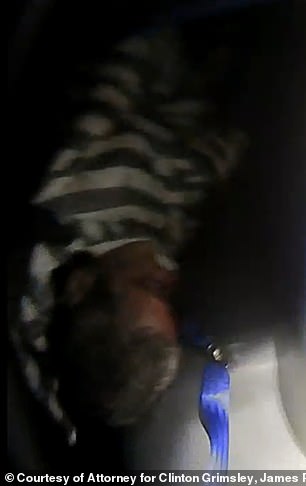 Clinton Grimsley (left and right) was allegedly beaten 16 times by a metal flashlight after avoiding from arrest by several police officers in April 2020. He filed a lawsuit against two of the officers this year, claiming ‘excessive use of force’ 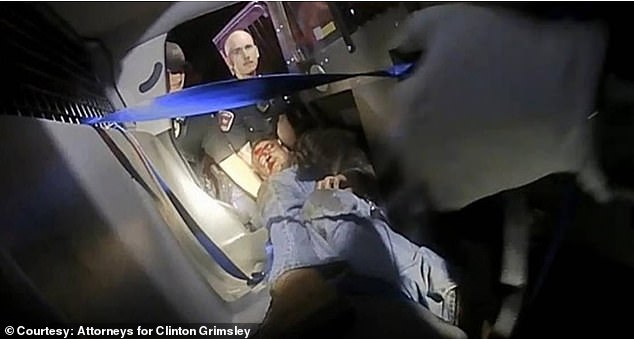 After the violent beating, Grimsley was taken to a police patrol car, where he was pictured bleeding from his head and face

That officer, Christoper Kjelsen, one of the two defendants named in the lawsuit, then reportedly jumped atop Grimsley and struck him in the head with his gun several times, according to the lawsuit. In his police report, Kjelsen said he first ran up to Grimsley and tripped, thus falling on Grimsley.

The plaintiff, however, claims in the lawsuit that police body camera footage shows the officer running up to him and kicking him in the head.

Moments after Kjelsen’s violent interaction with Grimsley, the two other officers on site – Brian Andrews and Charles Burns – began striking him with a metal flashlight to the face, the lawsuit states.

Footage from another a Mansfield police officer, Brian Raines, shows Grimsley being hit 16 times with the torch.

After they placed the victim into a patrol car, Raines was reportedly caught on video saying: ‘Nah I was hitting him pretty good, and got a ton of blood in my mouth,’ according to the lawsuit.

‘I punched him and struck him with the flashlight to the face. That’s where the injuries are going to be from,’ he added.

James P. Roberts, one of Grimsley’s attorneys, later clarified in the lawsuit: ‘Officer Raines laughed and talked flippantly about getting his flashlight dirty when he bloodied it beating Mr. Grimsley to a pulp.’

‘This is the type of behavior that must be extinguished from police departments before communities will fully trust that law enforcement is truly here to protect and serve.’ 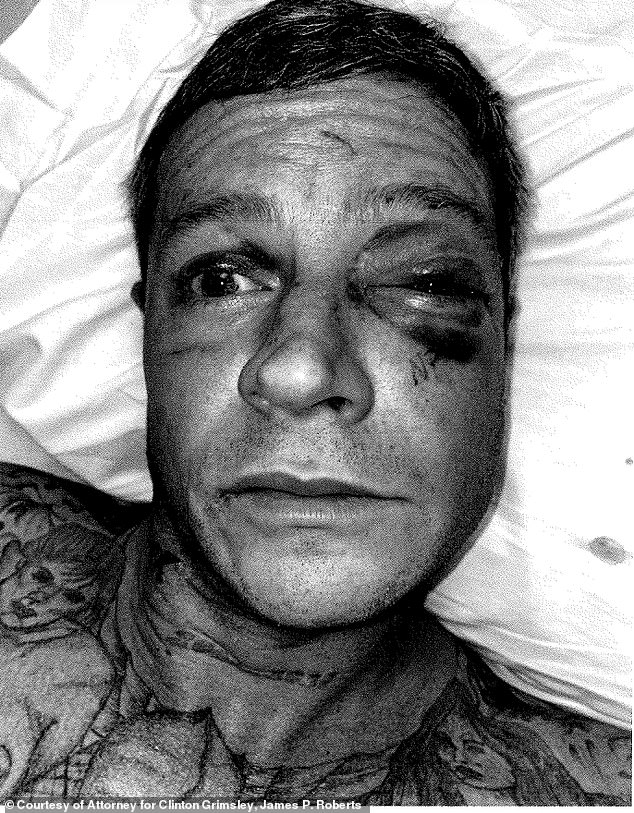 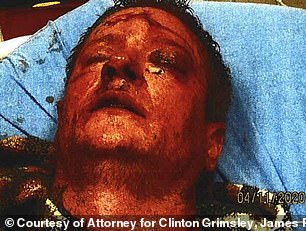 Grimsley (pictured after the attack) suffered a left orbital floor fracture and permanent scarring to his head and face, the lawsuit states

A paramedic dispatched at the scene in 2020 raised concerns about Grimsley’s physical condition to the officers, according to the lawsuit, saying:

‘I don’t know if he’s opened something up but now he’s bleeding real bad,’ he said. ‘He’s bleeding in the head real bad right now. He’s soaking up that mask real bad. Will the jail take him like that?’

Grimsley suffered noticeable injuries to his face and head. He also experienced a left orbital floor fracture and permanent scarring, the lawsuit states.

It further revealed one of the officers was caught saying on camera: ‘We roughed him up pretty good. It will be a significant use of force. I ended up getting a bunch of blood in my mouth – it’s like a bitter taste.’

The lawsuit specifically names two defendants in the lawsuit: Kjelsen and Raines.

‘This case is a clear example of when an officer exceeds the level of force required in a given situation by using excessive deadly force in violation of the Constitution,’ Roberts wrote in an e-mail sent to DailyMail.com.

‘Mr. Grimsley was unarmed and restrained by multiple officers on the ground when Officer Brian Raines of the Mansfield Police Department struck him sixteen times in the face with a metal flashlight, causing predictable and significant injuries.’

In a response filed against the lawsuit on June 13, Kjelsen confirmed that Grimsley was beaten by the officers, but only after he refused to comply, got in a brawl with officers and tried taking his taser and firearm.

He went on to claim that Grimsley fought and injured other officers and that use of force was necessary.

Raines also said in his response, which he filed on the same day as Kjelsen’s, that the police officers’ use of force was justified and that he didn’t violate Grimsley’s Miranda rights.

He did, however admit to having hit the victim in the head ‘at times with his hands alone and at times with his flashlights in his hand,’ his response reads. He also denied hitting Grimsley 16 times and rejected the lawsuit’s claims that he laughed about the use of force applied in the 2002 arrest.

Raines and Kjelsen maintain they re qualified for granted immunity from federal lawsuits.

Both officers are still respectively employed by the Mansfield and Kennedale Police Departments.

Following the violent arrest, Grimsley was charged on several counts of assaulting a law enforcement officer, as well as evading and resisting arrest, according to criminal court records filed in Tarrant County.

The assault charge was later dropped, but Grimsley was still given a 150-day prison sentence for the two other charges, court records show.

The two-year incident isn’t the first time that Grimsley had run-ins with the law: In 2002, he was sentenced to 20 years in jail on a murder charge for killing his father a year earlier after beating him with the rear end of a shotgun.