The wife of American women’s basketball star Brittney Griner is pleading for her release from Russian jail where she has been detained for at least three weeks after being arrested at a Moscow airport for allegedly having a vape pen filled with hash oil.

‘I love my wife wholeheartedly, so this message comes during one of the weakest moments of my life,’ Cherelle Griner posted to Instagram Saturday night. ‘I understand that many of you have grown to love BG over the years and have concerns and want details. Please honor our privacy as we continue to work on getting my wife home safely.’

Griner, 31, was detained last month while flying in to play for her Russian basketball team during the WNBA offseason, but there has been no confirmed date of when she was arrested. Her last communication was on February 5 when she posted a photo to Instagram of her and her Phoenix Mercury teammates.

Now Russia might use Griner as leverage as she faces up to 10 years in prison on the drug smuggling charge.

‘If we want her out of jail, Russia is going to have some terms,’ Former U.S. Deputy Assistant Secretary of Defense for Russia and Ukraine Evelyn Farkas told Yahoo Sports. ‘It could be a prisoner swap. They also could use it as an implicit threat or blackmail to get us to do something or not do something. Either way, they find it useful.’

Texas Congresswoman Sheila Jackson Lee, who represents Griner’s hometown of Houston and says she knew the star back when she played high school ball, said during a press conference Saturday that she has spoken with the State Department in an effort to get the WNBA star released.

‘We know that there were some issues dealing with vape cartridges and other items but let me be very clear,’ Lee said. ‘Brittney Griner is a United States citizen, she was a guest in Russia…and I will be demanding her release.’

‘I don’t want to disregard a sovereign nation, but Putin has disregarded sovereign nations his entire service in this world and anyone that is killing and attacking and destroying Ukraine, their neighboring country – that does not bother them has no right to hold Ms. Griner. Period,’ Lee said. ‘If there is challenges and concerns about her actions, it should be dealt with diplomatically and she should be released.’

The Congresswoman cited concern for Griner’s safety, noting that Russian jail is ‘no place for her,’ especially during a time of war. Her worry comes as many have expressed fear for Griner’s safety while in custody in Russia – where President Vladimir Putin has enacted strict anti-gay laws.

‘I believe that at this time, in the midst of war, how dangerous being Moscow, how dangerous it is to be in Moscow prisons … it is no place for her,’ Lee added. ‘I would call upon Russia at this time to really stop harassing U.S. citizens, but more importantly to release those that are there and to not claim any upper hand or any sense of character in the pillage of murder and terroristic actions against the Ukrainians.’

‘Please allow Ms. Griner to safely leave. Allow her legal representation to handle her matters and ask the United States to take a special attention to all of those detained in Russia at this time.’

In a statement to DailyMail.com on Saturday, Griner’s agent Lindsay Kagawa Colas did not dispute reports of her client’s detention.

‘We are aware of the situation with Brittney Griner in Russia and are in close contact with her, her legal representation in Russia, her family, her teams, and the WNBA and NBA,’ Colas said. ‘As this is an ongoing legal matter, we are not able to comment further on the specifics of her case but can confirm that as we work to get her home, her mental and physical health remain our primary concern.’ 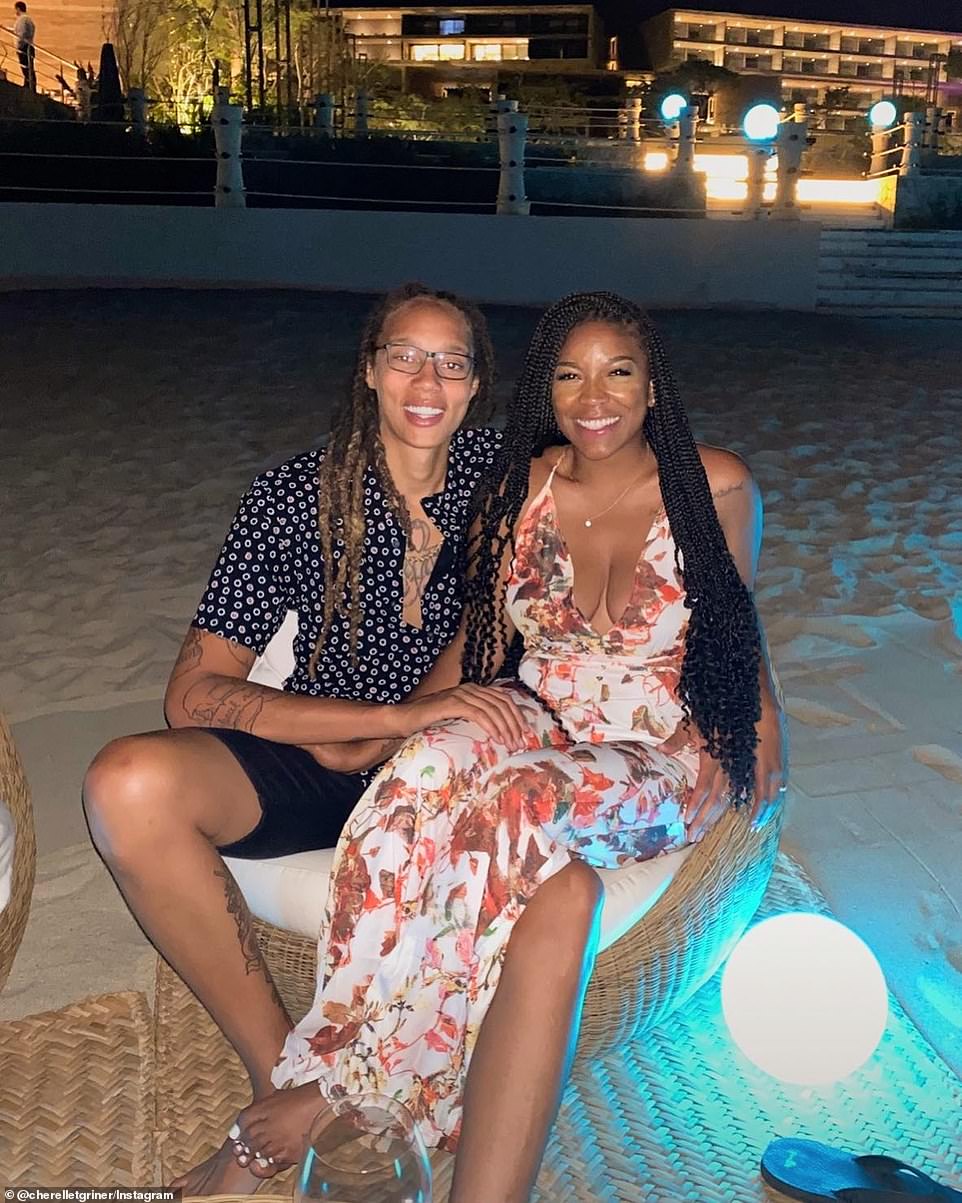 On Saturday, Griner’s wife Cherelle (right) thanked people for their prayers during what she described as one of the ‘weakest’ moments of her life

Griner, pictured in black, is seen being stopped by airport police after a sniffer dog picked up something in her bag in February 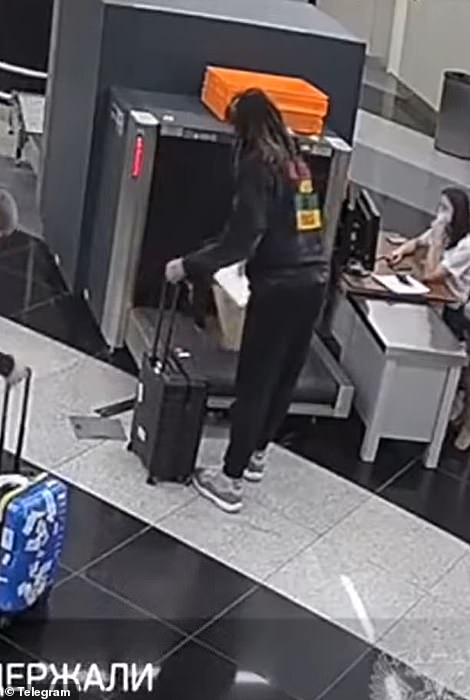 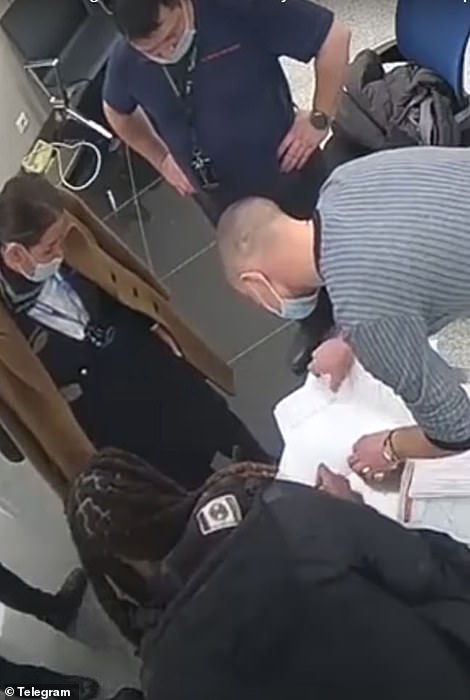 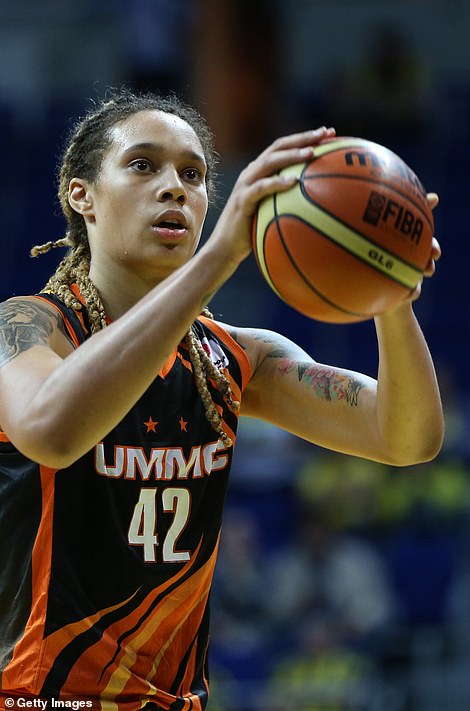 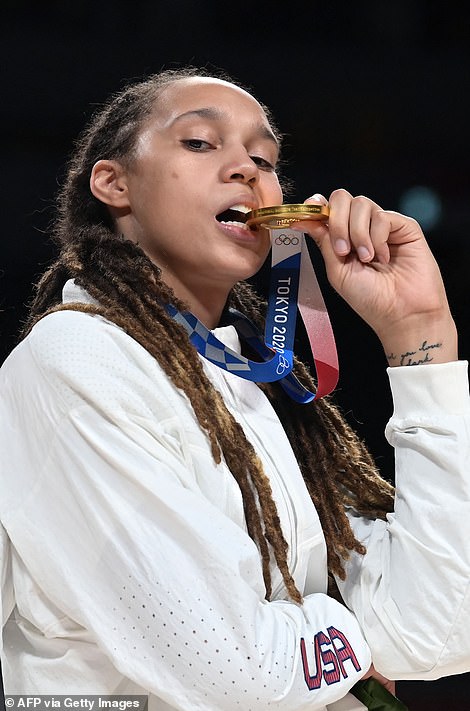 Griner was in Russia to play for UMMC Yekaterinburg in the women’s EuroLeague, where she has played since 2016 and helped the team win four titles 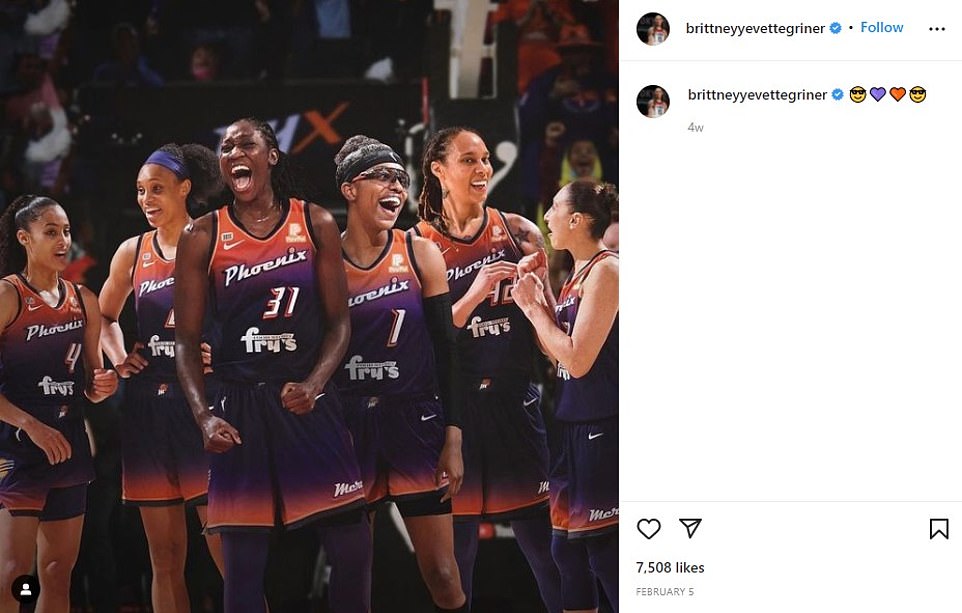 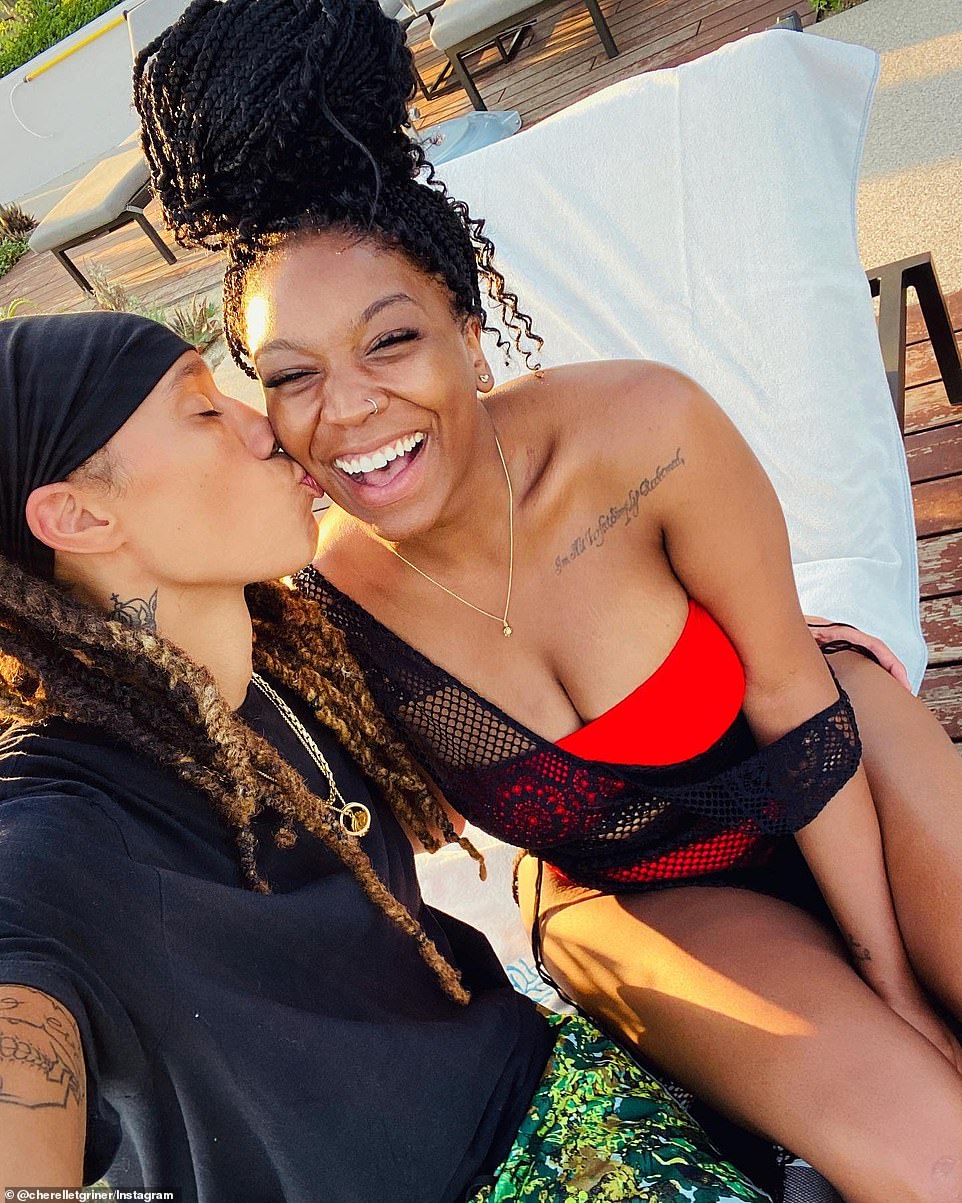 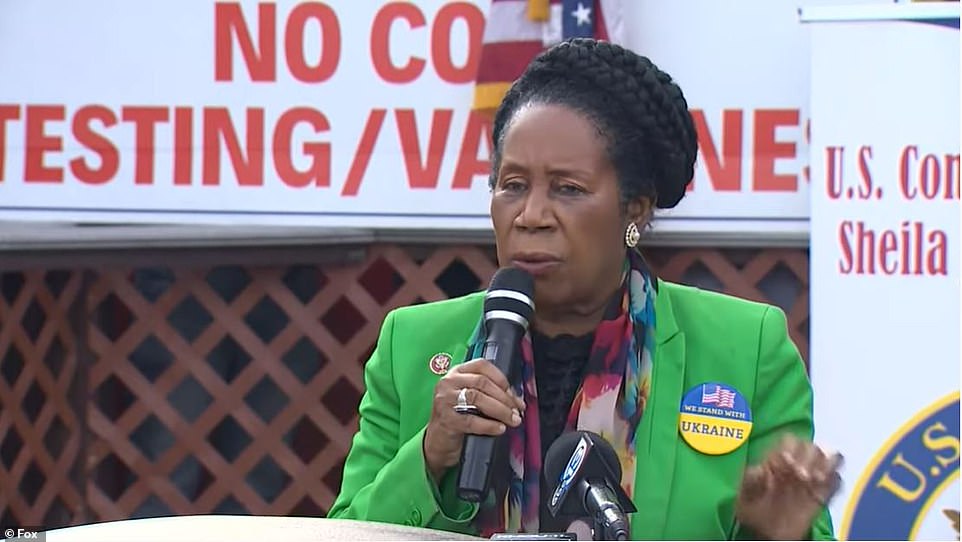 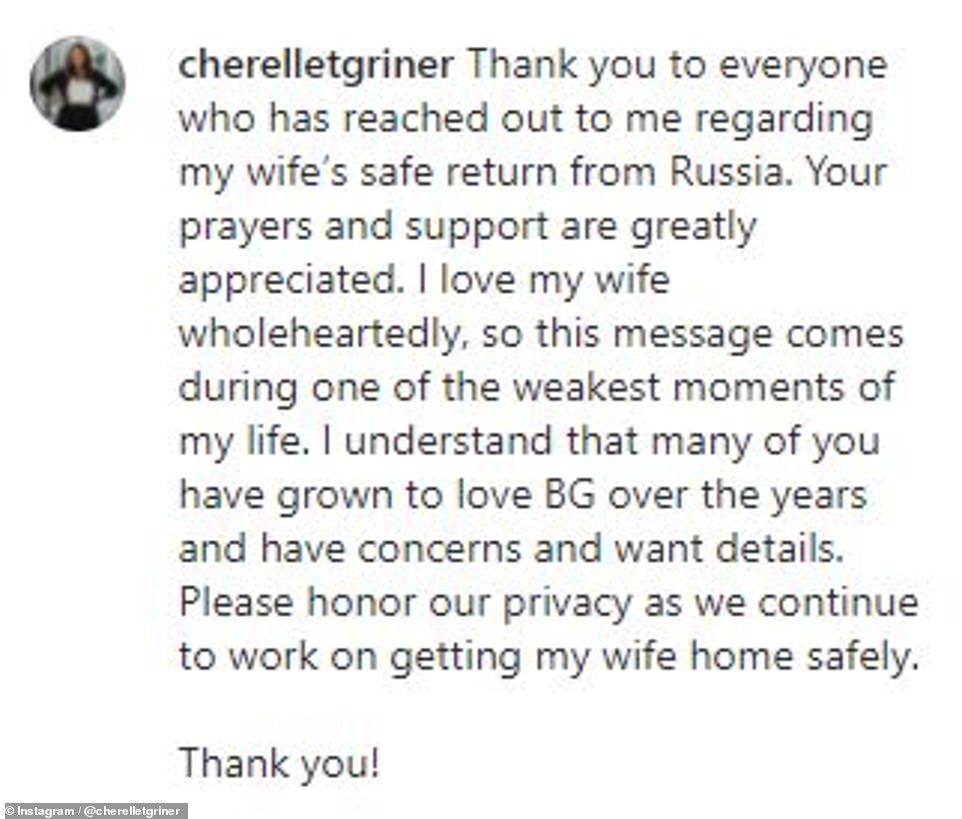 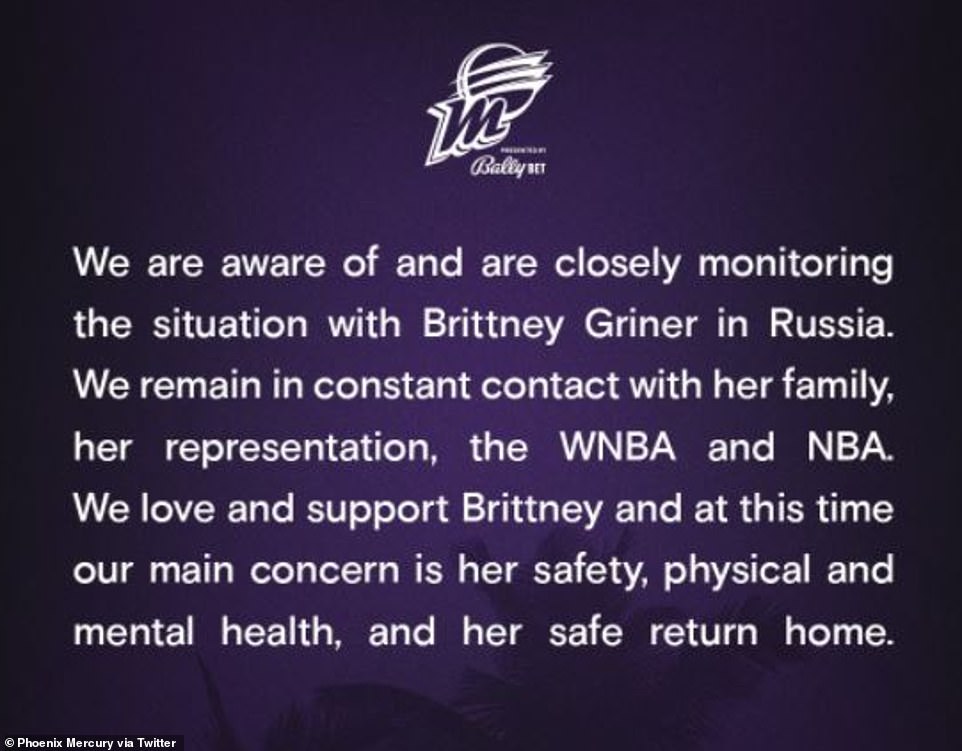 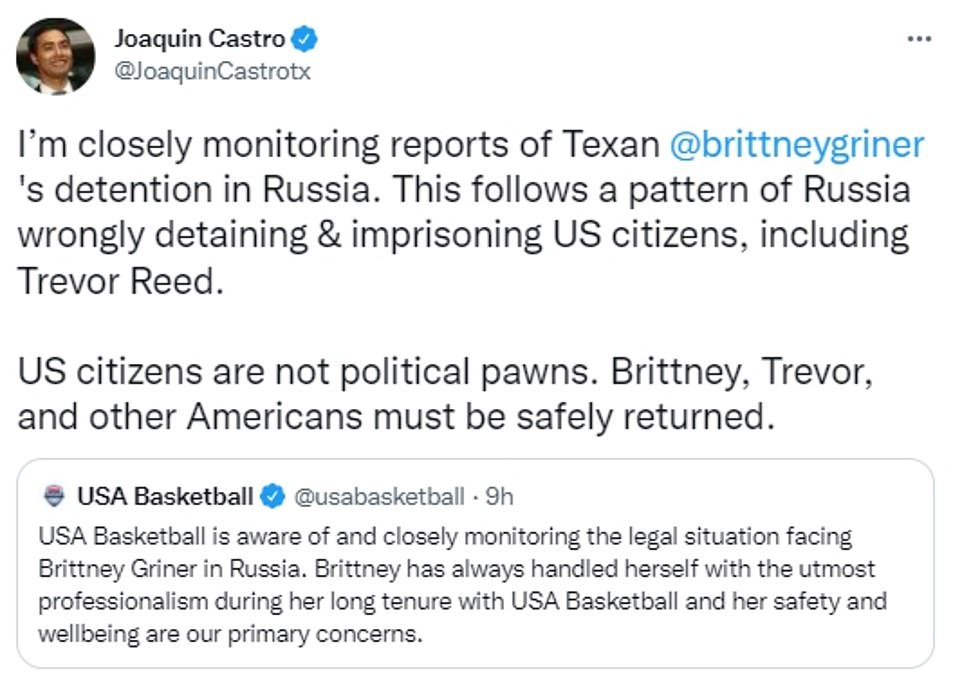 Other prominent politicians from Griner’s home state of Texas are also calling for her release. Texas Congressman Joaquin Castro said he would monitor the situation and said Griner must be safely returned.

‘I’m closely monitoring reports of Texan Brittney Griner’s detention in Russia. This follows a pattern of Russia wrongly detaining & imprisoning US citizens, including Trevor Reed. US citizens are not political pawns. Brittney, Trevor, and other Americans must be safely returned,’ he tweeted on Saturday.

Griner flew from  New York to Moscow’s Sheremetyevo International Airport, where drug-sniffing dogs were drawn to her luggage, according to InterFax Russian news agency. The date of her flight has not been revealed.

After the dog identified the bag, a customs agent used ‘fluoroscopic equipment’ to scan the contents and discovered the vape cartridges.

Timeline of Griner’s detainment in Russia

The Biden administration told Americans to leave Ukraine and warned that an invasion could begin ‘at any time’ but Griner could have already been detained by then.

Russia began its invasion of Ukraine

Video shared on Telegram showed the moment she was apprehended, with a dog approaching Griner as she walked through the airport. She was then seen putting her belongings through a scanner, with cops putting items in a plastic evidence envelope and sealing it shut as she looked on.

‘The customs inspection of hand luggage carried by a US citizen confirmed the presence of ‘vapes’ with a liquid with a specific smell, and an expert found that the liquid is a narcotic cannabis oil (hash oil),’ according to the Russian customs service.

Griner was flying to Russia to play for UMMC Yekaterinburg in the women’s EuroLeague, where she has played since 2016 and helped the team win four titles.

She last played for UMMC Ekaterinburg on January 29 before the league took a two-week break in early February for the FIBA World Cup qualifying tournaments, CBS News reported.

Griner, like many other players, take overseas jobs to supplement their salary from the WNBA.

She earned over $1 million per season playing for the Russian team.

Her arrest in Russia couldn’t come at a worse time as the country has been isolated financially and politically from the rest of the world after it invaded Ukraine.

Air travel between Russian and the U.S. has been halted as part of the economic sanctions that President Joe Biden levied against the Slavic nation for attacking its neighbor.

On February 11, six days after Griner’s last Instagram post, the Biden administration told Americans to leave Ukraine and warned that an invasion could begin ‘at any time’ but Griner could have already been detained by then.

Many American professional basketball players competing in Russia during the WNBA offseason found themselves scrambling to find airline tickets to the United States following Vladimir Putin’s invasion of Ukraine over safety concerns.

On Saturday, the State Department recently issued an advisory not to travel to Russia citing the possible ‘harassment against U.S. citizens by Russian government security officials.’

Officials added that U.S. citizens should leave Russia immediately and that the embassy had ‘limited ability to assist U.S. citizens.’ 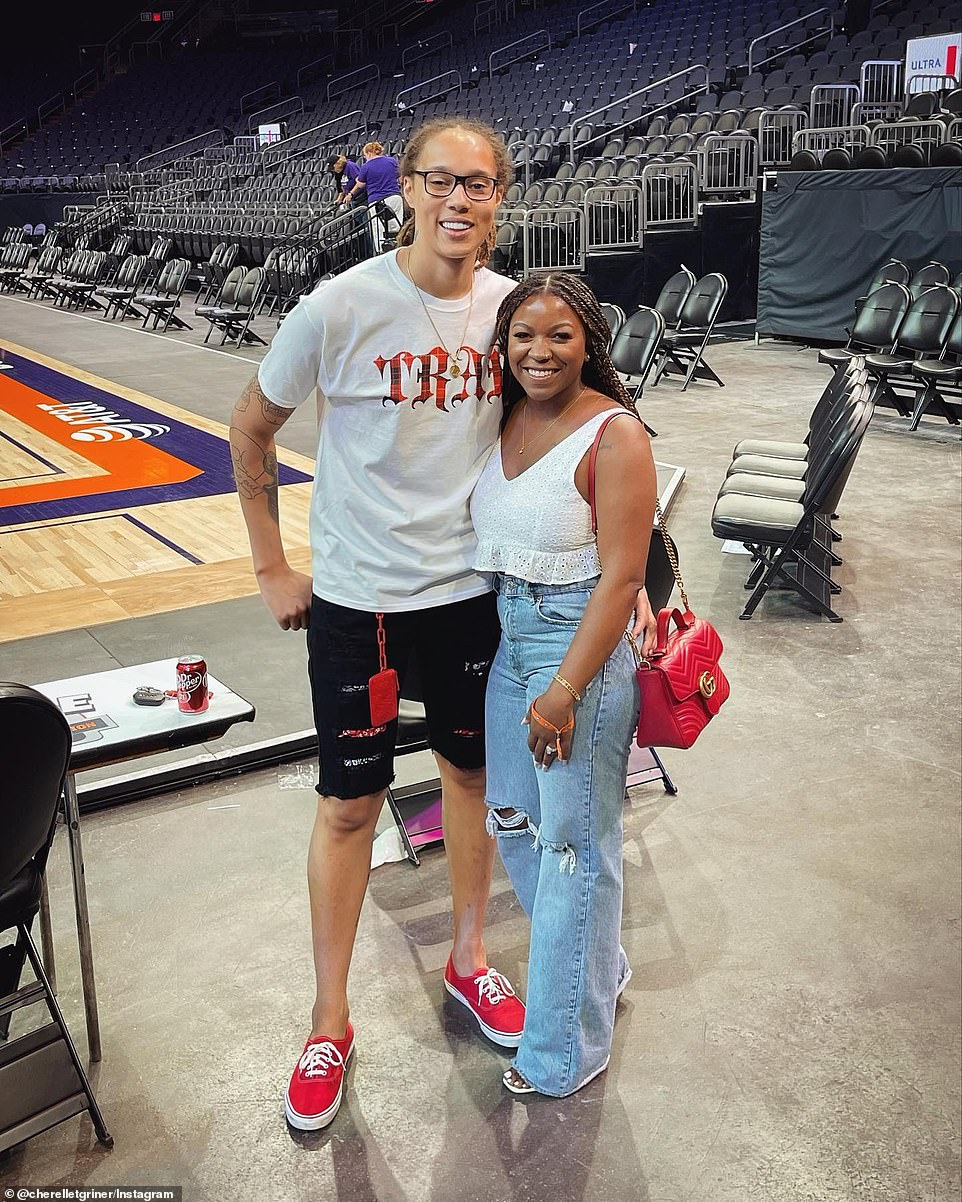 ‘Thank you to everyone who has reached out to me regarding my wife’s safe return from Russia,’ Brittney’s wife Cherelle Griner told her followers on Saturday (couple pictured together) 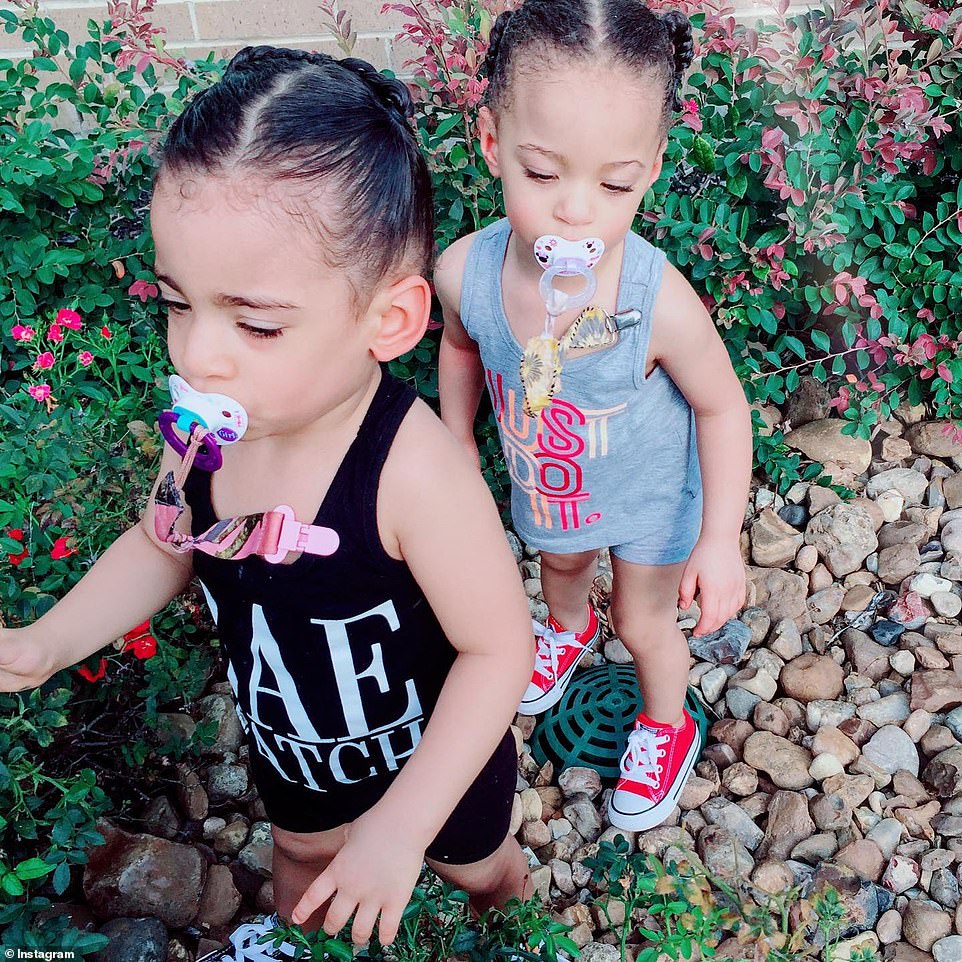 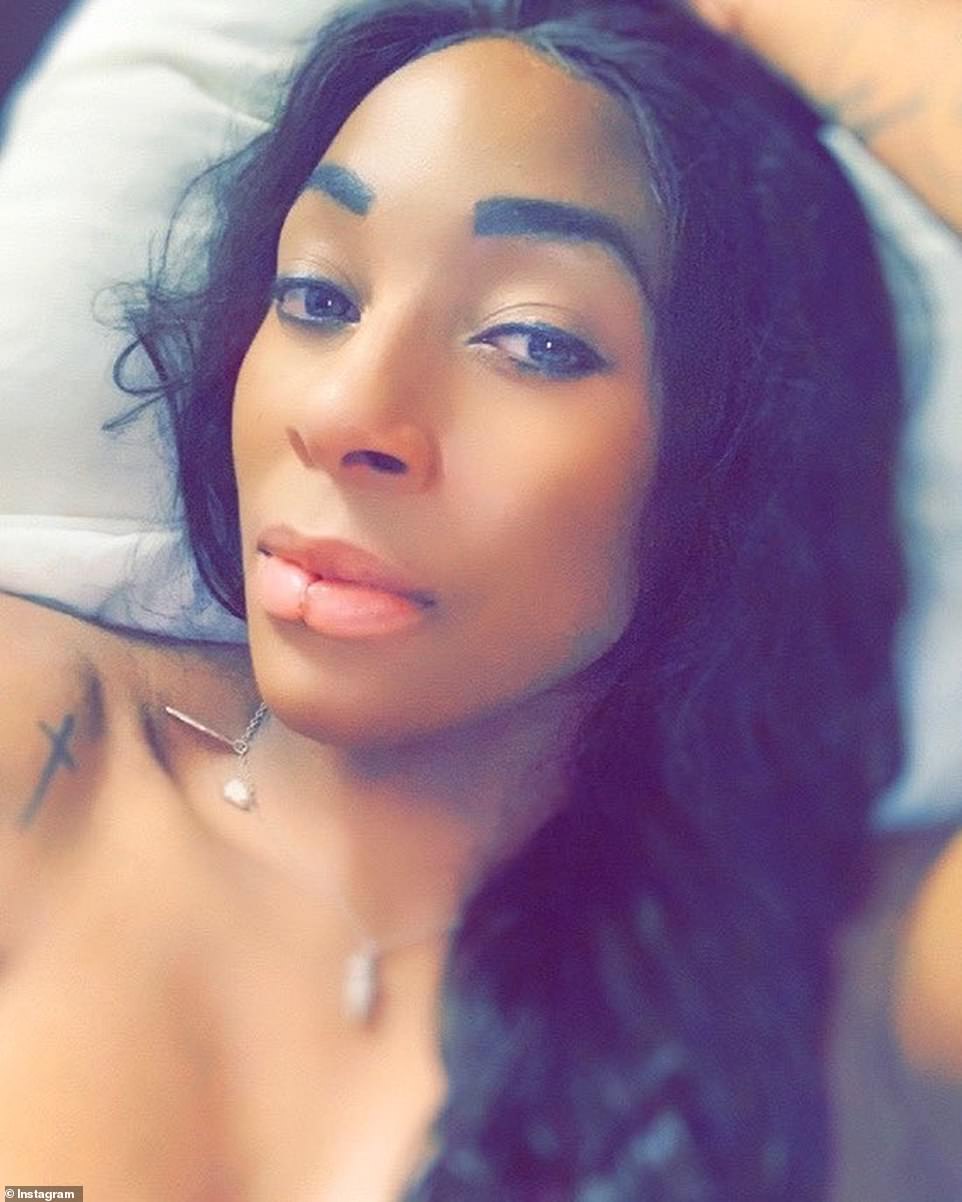 In 2015, Griner and her then wife, Glory Johnson, (pictured) were suspended for seven games after they were arrested and charged with domestic violence

‘USA Basketball is aware of and closely monitoring the legal situation facing Brittney Griner in Russia,’ the WNBA said in a statement. ‘Brittney has always handled herself with the utmost professionalism during her long tenure with USA Basketball and her safety and wellbeing are our primary concerns.’

Many are worried for Griner, who is openly gay, to be detained in Russia- which is famously anti LGBTQ+.

‘A black queer woman has been held in Russia for almost a month. This is scary as hell,’ tweeted activist and writer Raquel Willis. ‘It’s unfortunate that Brittney Griner has become a major pawn in world leaders’ quest for domination.’

‘It taking three weeks for Brittney Griner’s detention in Russia to hit the news here is absurd and horrifying in a way that’s difficult to comprehend,’ echoed activist and former Human Rights Campaign press secretary Charlotte Clymer. ‘Russia has some of the most anti-LGBTQ laws among major nations. It cannot be overstated the danger she’s in right now.’

She added: ‘Look, there’s no way a world famous American athlete who’s not a black queer woman is held in detention by a hostile country—on the verge of war—and it’s not leaked to the press earlier than this. Racism, sexism, and homophobia are factors here. This whole damn situation stinks.’

Attorney Adrienne Lawrence, in a Twitter thread commenting on the situation, said she fears Putin ‘crafted this chaos with Griner and is now stoking it to play with our emotions and to put the Biden Administration in a difficult position that divides our nation further.’

Lawrence also cited fears for the athlete’s safety based over her sexuality and race: ‘We also must bear in mind that Griner is a black, gender non-conforming, proud lesbian. She’s everything these conservative, hyped-up Russian orthodox, white supremacist, warmongers hate. This is a very scary situation for her and her loved ones.’ 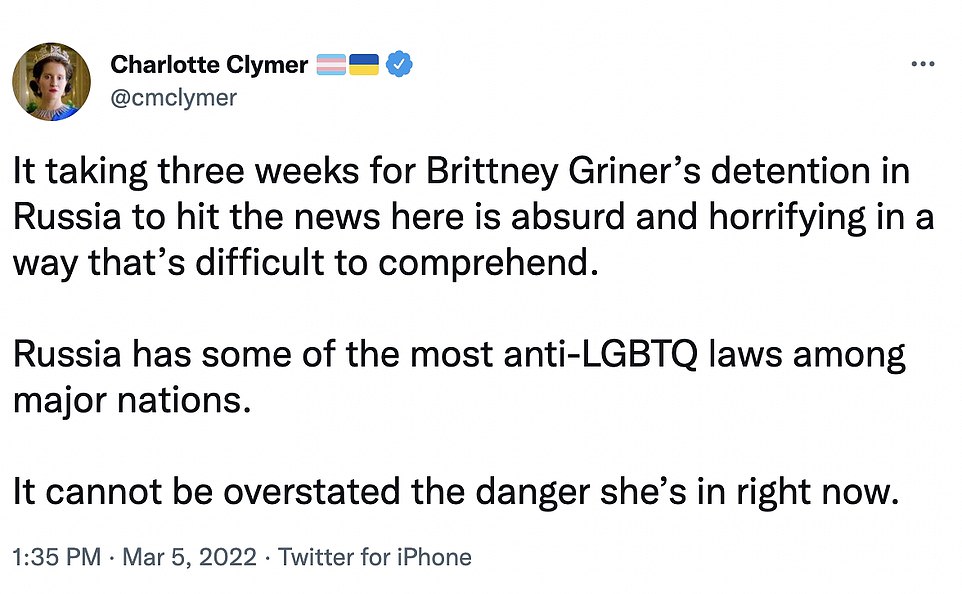 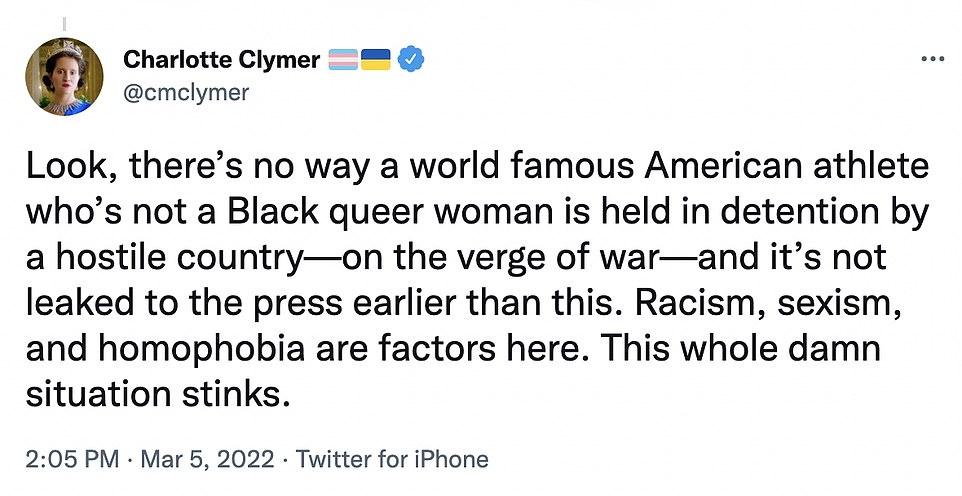 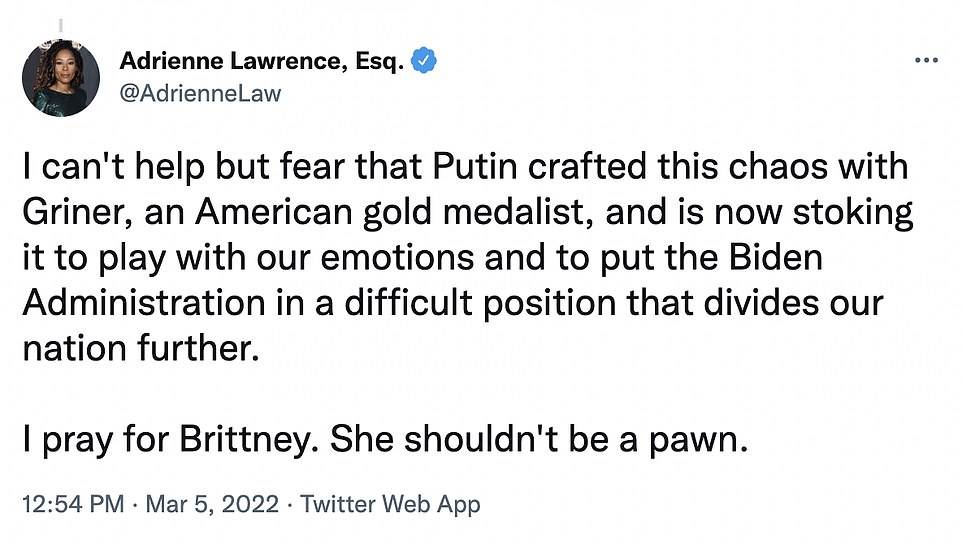 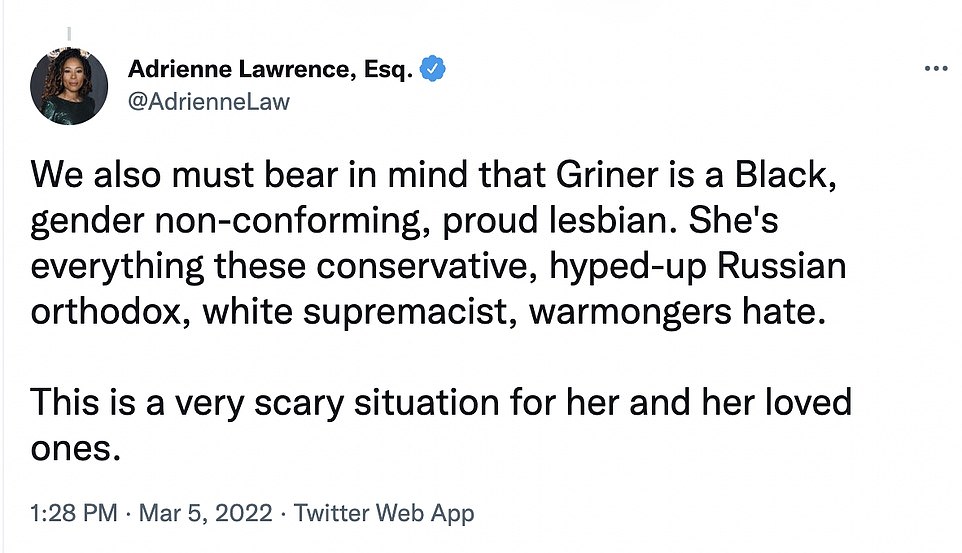 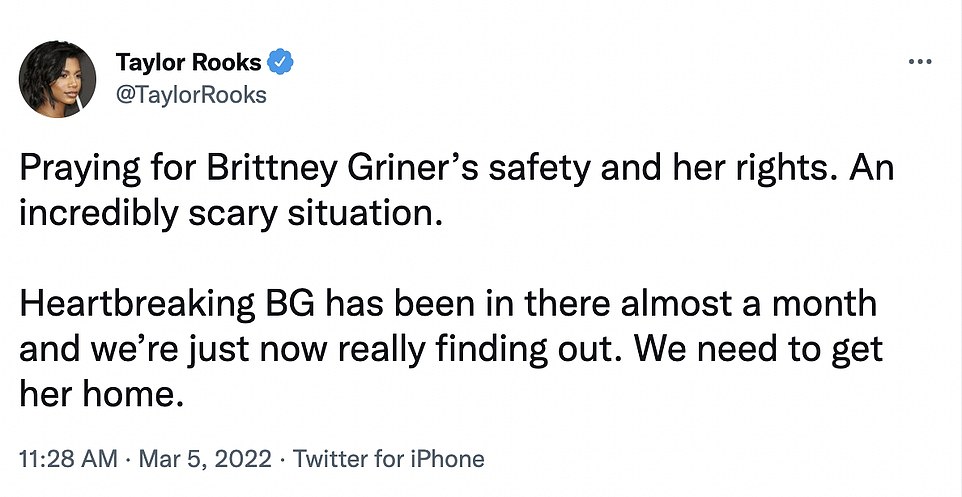 Many are worried for Griner, who is openly gay, to be detained in Russia- which is famously anti LGBTQ+

The Phoenix Mercury confirmed that Griner was arrested and jailed. Possession of cannabis is illegal in Russia. Possession of up to six grams can result in a fine or imprisonment of up to 15 days, while being caught with larger amounts can lead to a stiffer sentence.

It is unclear how much of the drug Griner had in her possession.

She was charged with ‘smuggling narcotic drugs in a significant amount,’ according to Interfax, a crime that carries a penalty of five to ten years in prison.

Griner, who is known for her sharp elbows on and off the basketball court, led Baylor University in Waco, Texas, to a national championship in 2013 before being drafted first overall by the Phoenix Mercury later that year.

She averaged more than 15 points per game in 2014, the year the team won the WNBA championship.

The six-foot-nine-inch center was part of gold medal-winning 2016 U.S. Women’s Basketball team in Brazil and again won gold in the 2020 Tokyo Olympics.

In 2015, Griner and her then wife, Glory Johnson, were suspended for seven games after they were arrested and charged with domestic violence.

Griner pleaded guilty to disorderly conducted and agreed to a six month domestic violence prevention counseling, after which the charges were cleared, according to The New York Times.

In June 2015 after Johnson revealed she was pregnant with twins following an IVF treatments, Griner filed for an annulment from Johnson after less than a month of marriage.

According to Griner, she married Johnson under pressure said she was not involved in her pregnancy.

Their divorce was finalized the next year and Griner was ordered to pay child support for twin daughters Ava Simone and Solei Diem.