A woke Las Vegas judge is facing calls from a police union to resign after brazenly telling a criminal in her courtroom she didn’t know if she would ‘walk away alive’ from cops.

Judge Erika Ballou told a defendant that he should have walked away from officers, after being arrested for committing battery against an officer in Nevada while on probation.

Footage of the exchange shared by KLAS shows Judge Ballou, who is black, saying: ‘You’re the one making the decisions not to walk away from cops. You’re a black man in America.

‘You know you don’t want to be nowhere where cops are. Listen to me.

‘You know you don’t want to be nowhere where cops are cause I know I don’t, and I’m a middle-aged, middle-class black woman.

‘I don’t want to be around where the cops are because I don’t know if I’m going to walk away alive or not. You know that.’

The Clark County District attorney’s office was seeking the revocation of the probation of the unnamed man, who Judge Ballou was addressing on July 11.

The Las Vegas Police Protective Association is now calling for her to quit her post over the controversial comments. 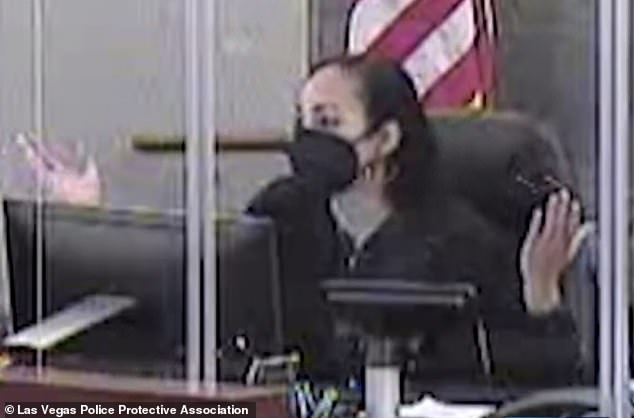 The LVPPA has branded the judge as ‘biased’ against law enforcement and are calling for her to resign her post. They believe that her comments to the defendant were ‘unethical and irresponsible’

She ruled that the defendant, whose identity is not known, was in violation of his probation which she then revoked.

Judge Ballou reduced his sentence from original 24 to 60-months to 19 to 48 months.

She added: ‘Even if the cop like came after and was harassing your group, you should have walked away instead of staying.

‘You needed to walk away because you knew you were on probation, you knew.’

The LLVP, which represents Las Vegas Metropolitan Police Department officers, has now called for her to quit over the comments after being sent the footage.

A spokesman said: ‘On behalf of the men and women of law enforcement, the Las Vegas Police Protective Association takes exception to Judge Erika Ballou’s disparaging comments about police officers.

‘We call upon Judge Ballou to resign from the bench. We also ask the Judicial Ethics Commission to sanction her for violating the Nevada Code of Judicial Conduct.

‘Among other obligations, the rules require the judiciary to, ‘[A]spire at all times to conduct that ensures the greatest possible public confidence in their independence, impartiality, integrity, and competence.’

‘Judge Ballou has demonstrated that she is biased against law enforcement and cannot live up to the standards required of a jurist.

‘Judge Ballou’s comments, from the bench, that she, ‘does not want to be around where cops are because I don’t know whether I am going to walk away alive or not…’ are both unethical and irresponsible.

‘Police officers and the law abiding citizens of our community deserve better from the judiciary.’ 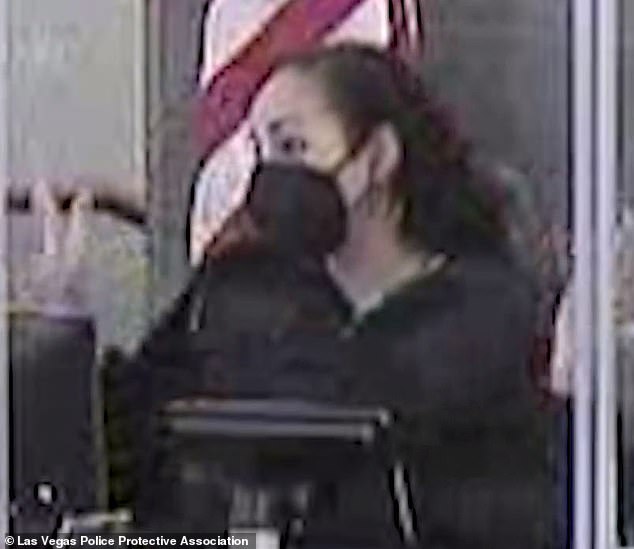 Judge Ballou, pictured at the hearing on July 11, was also caught on camera becoming emotional while sentencing a repeat teenage offender in January last year. Judge Ballou told the teen she would ‘think about this every single day’ for the rest of her life 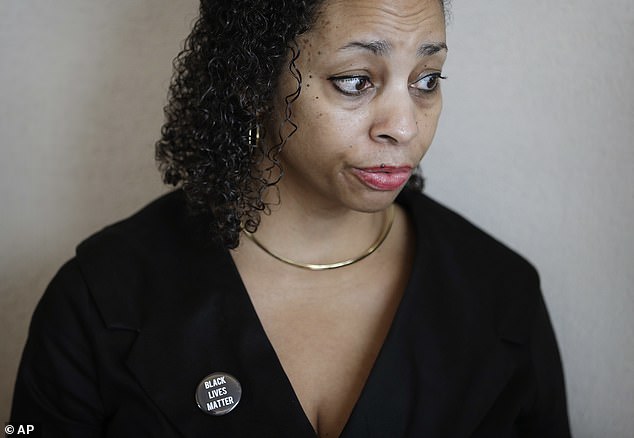 In 2016 Ballou refused to remove her ‘BLM’ badge from her blouse when asked to by Clark County District Court Judge Douglas Herndon. She said at the time ‘In a free country, I shouldn’t be afraid of the police, but I am’ 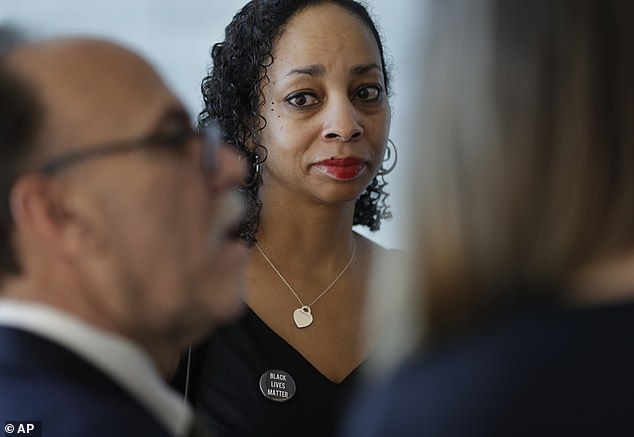 Judge Erika Ballou told a defendant that she would not be sure she would ‘walk away alive’ if she became involved in an incident with police. The Judge in the Eighth Judicial District Court in Nevada has previously hit headlines for being outspoken around the Black Lives Matter movement

Judge has history of controversial statements

Judge Erika Ballou has hit the headlines multiple times in recent years, over controversial statements or sentences made in her court.

In June of this year, Katie Moriarty claimed a COVID infection had scrambled Ballou’s mind after she was sentenced to 364 days behind bars on top of 364 days time served for a reckless driving crash.

Moriarty told the Nevada Current: ‘Judge Ballou was suffering from COVID and not able to appear in person the day of my sentencing (and) made it clear she was not fit to be making such important decisions.’

DailyMail.com have approached the District Court for a comment on Judge Ballou’s behalf.

Judge Ballou was elected to bench in November 2020, taking her position in January 2021, and previously served as a Deputy Public Defender for Clark County Public Defenders office for 15 years.

She was also caught on camera becoming emotional while sentencing a repeat teenage offender in January last year.

The offender had eight previous counts for armed robbery, with Judge Ballou telling him she would ‘think about this every single day’ for the rest of her life.

Before stepping up as a Judge, she found herself in hot water after she refused to remove a ‘Black Lives Matter’ pin in court in September 2016, while still working as a deputy public defender.

Clark County District Court Judge Douglas Herndon requested she remove the badge from her blouse while representing a white domestic battery defendant at a sentencing hearing.

However she later accepted that she would not be allowed to wear the pin, as courtrooms should be ‘viewpoint-neutral’.

At the time Ballou said she knew wearing her pin would be controversial after the Las Vegas police union sent a letter to judges complaining about what the union executive termed ‘Black Lives Matter propaganda’ in courtrooms.

In a statement she said: ‘In a free country, I shouldn’t be afraid of the police, but I am.’