A New Jersey woman who cooked up a fake sob story with a homeless man to swindle hundreds of thousands of dollars on GoFundMe was sentenced to one year in prison on Thursday.

Katelyn McLure, 32, will also serve three years of supervised release and must pay restitution for the money she and her boyfriend, Mark D’Amico, stole using the phony fundraiser.

McLure and D’Amico hatched the plot in 2018, when they falsely claimed a homeless man, Johnny Bobbitt, gave her his last $20 when she ran out of gas in the middle of the night.

In reality, the trio had actually met a month earlier than was claimed at a casino in Philadelphia which McClure and D’Amico frequented and where Bobbitt was known to hang around outside.

Together they devised a plan that motivated 14,000 people to donate approximately $400,000 by asking them to ‘pay it forward’ on a GoFundMe for Bobbitt. 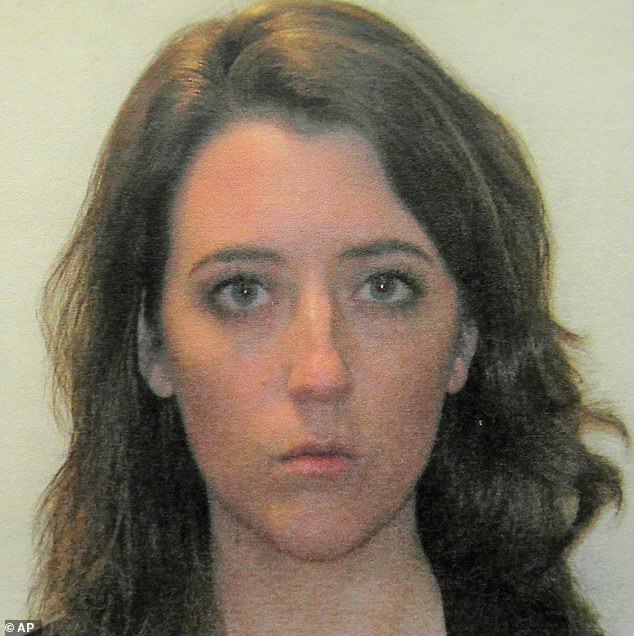 Kate McClure, 32, was sentenced to a year behind bars after she defrauded thousands of people out of almost $400,000 after making up a fake sob story involving homeless man Johnny Bobbitt 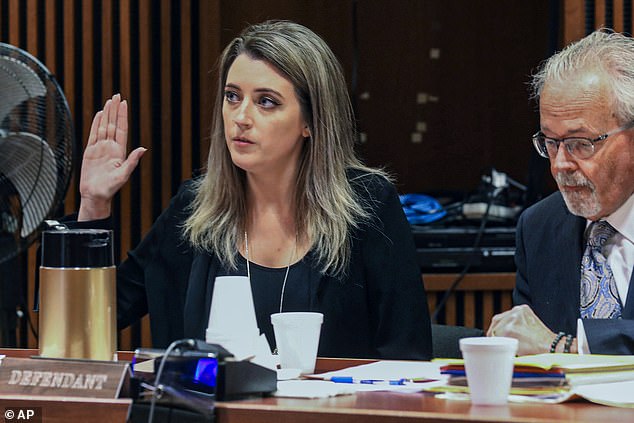 McLure is seen here in 2019 with her lawyer in Burlington County Courthouse after being charged with theft by deception. She was sentenced to one year behind bars and still faces state charges 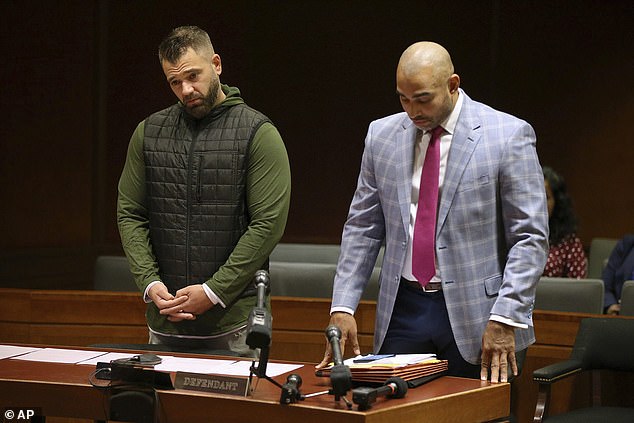 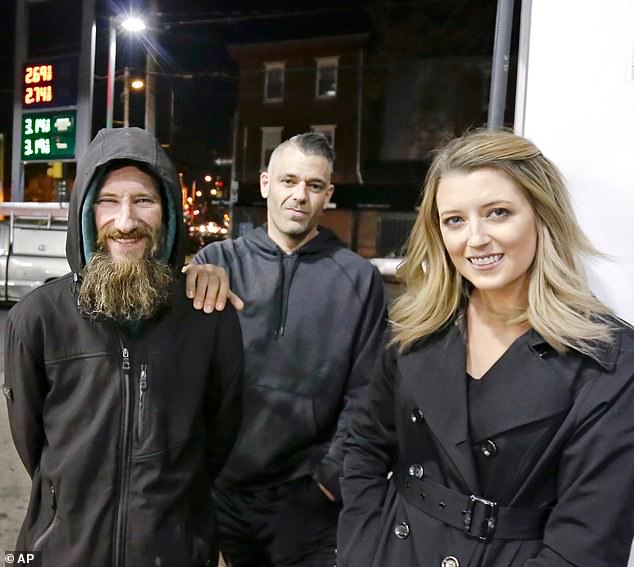 Liars: Bobbitt, D’Amico and McClure are pictured posing in front of the gas station they claimed was where Bobbitt spent his last $20 to buy McClure gas in 2017 for a newspaper article about their viral GoFundMe campaign. In reality, they had known each other for a month before, after meeting at a casino

The scheme collapsed when Bobbitt sued the couple, claiming the couple only shared around $75,000 with him and blew the cash on luxury items, a BMW and casino trips among other things.

D’Amico accepted a plea deal in Burlington County in 2019 and now faces five years behind bars, while Bobbitt was ordered to enter a drug rehabilitation program.

All three also face state charges next month, which may mean more jailtime for the trio.

In November 2017, McClure created the GoFundMe campaign claiming to have just met Bobbitt and returned to repay him for saving her when she was stranded. An hour later, according to prosecutors, she texted a friend admitting it was a lie. 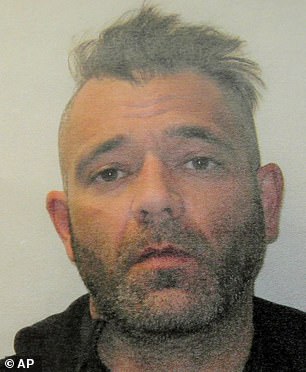 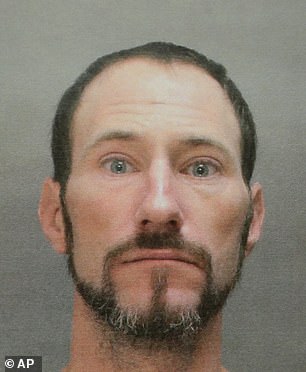 Mark D’Amico, left, and Johnny Bobbitt conspired with McLure to set up a fraudulent GoFundMe for Bobbitt, but the plan unraveled when Bobbitt said he did not receive his fair share 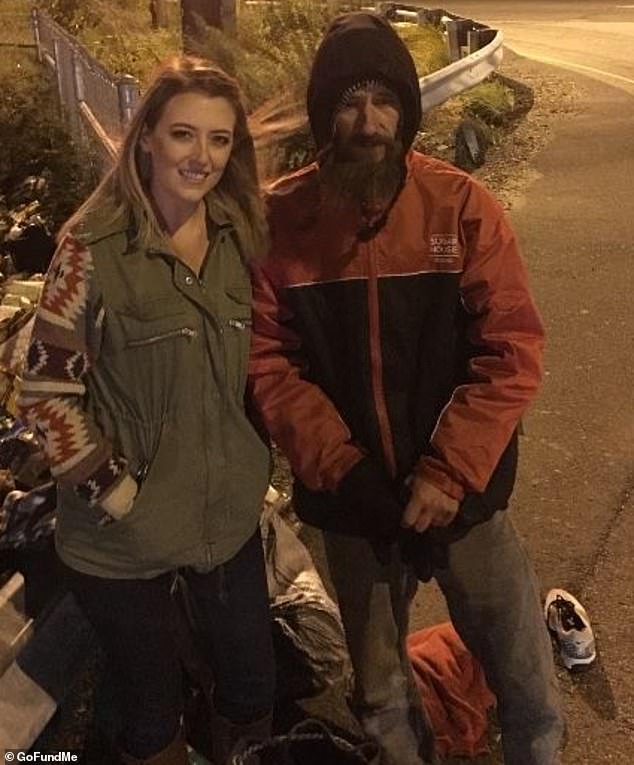 McClure and her boyfriend used this photograph to promote their campaign. They said they went back to find Bobbitt to return the money he had given her. An hour after posting it online, McClure texted a friend to say she had ‘made up the gas stuff’ to ‘make people feel bad’

‘OK so wait, the gas part is completely made up but the guy isn’t,’ McLure said to her friend at the time.

WHERE DID THE MONEY GO?

‘I had to make something up so people would feel bad so shoosh about the made up stuff,’ she said in one of 60,000 text messages that were reviewed as part of the investigation.

The story began to fell apart in August 2018 after Bobbitt complained to a newspaper that the couple ‘stole’ the money and left him to return to the streets.

D’Amico and McClure hit back claiming that he could not be trusted with it because he was a drug addict.

But their conflicting statements about how much they had and when it was all spent raised red flags.

Prosecutors then reviewed transactions and found that not only had the couple blown all the money, as has been suspected for months, but their story was fraudulent from the beginning and Bobbitt, who had been seen as their victim, was complicit.

‘The paying it forward story that drove this fundraiser might seem too good to be true. Unfortunately it was. The entire campaign was predicated on a lie,’ they said.

‘D’Amico, McClure and Bobbitt conspired to pass off a fake, feel good story that would compel donors to contribute to their cause and it worked in a very big way but it was fictitious and illegal and there are consequences,’ Scott Coffina, Burlington County Prosecutor, said at a press conference in 2018. 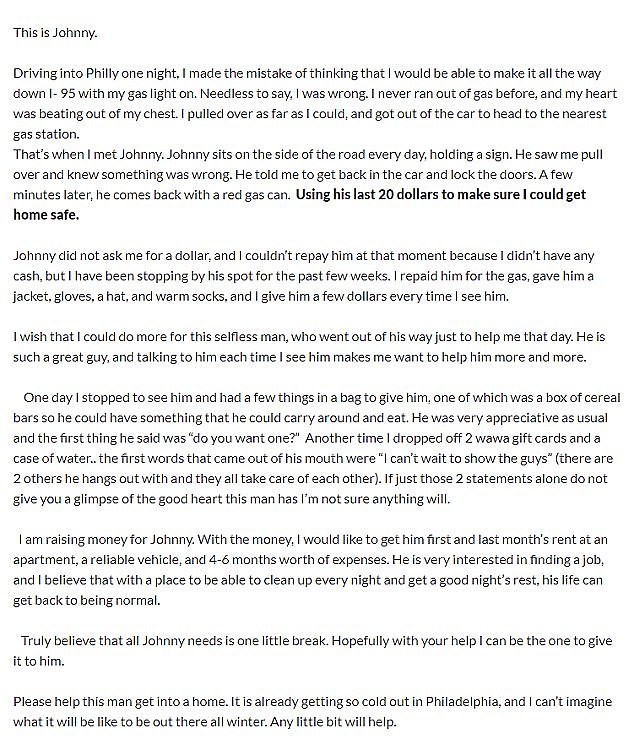 The lie: This was the original post made by McClure on GoFundMe that went round the world, garnering thousands of views 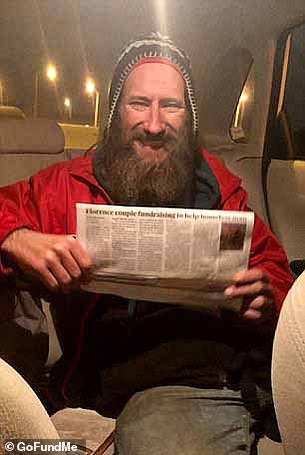 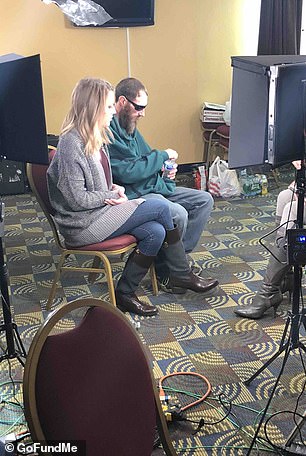 Prosecutors condemned the trio’s ‘media blitz’ which fueled donations. More than 14,000 people contributed to the account from all over the world

He explained how they met a month earlier.

‘Johnny Bobbitt used to hang out near an underpass and this off ramp happens to be near a Sugarhouse casino and they frequented it and they ran into him on their trips there, befriended him, gave him $10, some coffee or some food,’ Burlington County Prosecutor Scott Coffina said.

Initially, they set out to raise $10,000 and claimed it would be used to get Bobbitt off the streets.

But the donations poured in as the three of them promoted it and soon the total was at $403,000. 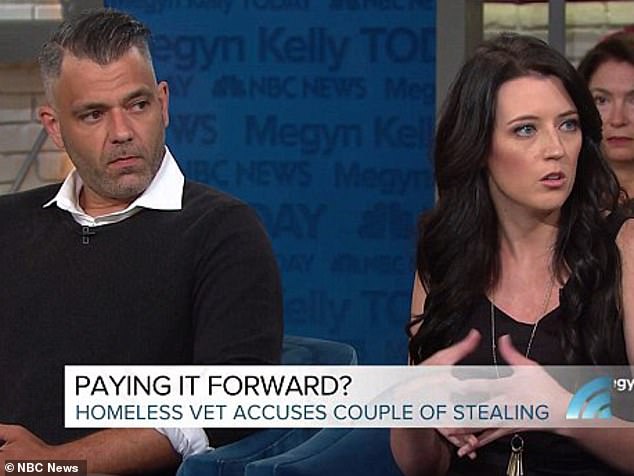 In August they  appeared on Megyn Kelly Today claiming they had done nothing wrong and were happy with their version of events. They told the show they had $150,000 left but they in fact only had $10,000 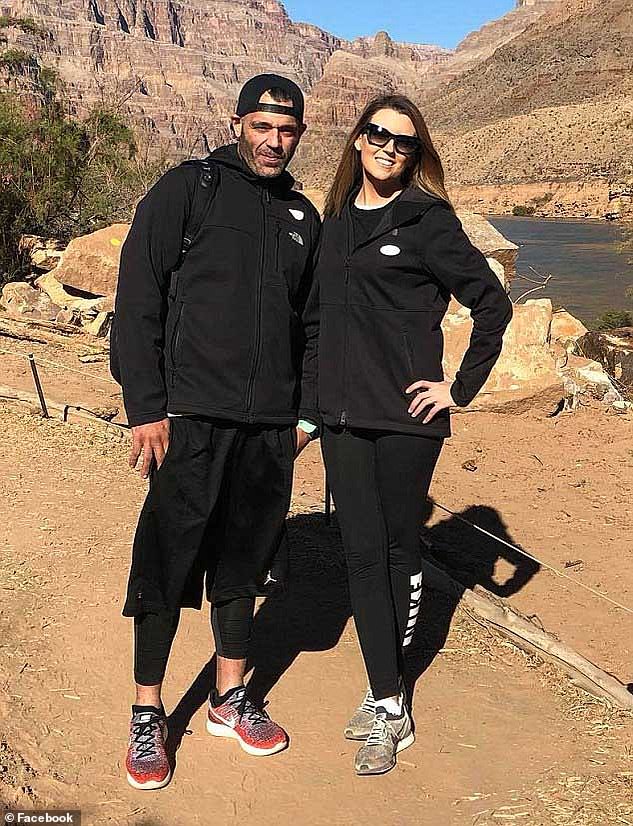 D’Amico, above during their trip to Nevada, was confident he could shop around a book about their experience called No Good Deed after Bobbitt made the dispute over the money public

‘This was an irresistibly heartwarming tale and the trio’s international media blitz to promote the campaign convinced more than 14,000 donors to contribute a total of $403,000 to help Johnny Bobbitt,’ Coffina said.

McClure and D’Amico were overcome with greed and rather than give Bobbitt even half of the money, they withheld it and spent it on themselves.

‘By his own estimate, Bobbitt received approximately $75,000 of the money.

‘But he wanted his fair share of the take and initiated legal action in August 2018 when his confederates refused to turn it over,’ Coffina said. ‘By that point though, the money was long gone.’

There were also Louis Vuitton handbags, a BMW and trips including one to to Las Vegas.

When Bobbitt complained about the frivolous spending, they insisted they had done no wrong.

They even went on Megyn Kelly Today, the now-cancelled NBC morning show, and insisted they were trying to do the right thing.

D’Amico stated unequivocally that they still had $150,000 of the money and that they had no, as was accused, spent it lavishly on themselves.

But in a March 2018 text message to her boyfriend, McClure ‘lamented that the pair had less than $10,000 remaining but D’Amico wasn’t worried,’ Coffina said.

‘He was certain that the payday from the book deal he was planning would dwarf the GoFundMe money,’ he added.

The book would be called No Good Deed.

Prosecutors said that while they were grateful to Bobbitt for his military service and sympathized with his plight as a homeless drug addict, he was complicit in the lie.

It is not yet known if they set up terms to dictate who would pocket what when they made up the story.

When Bobbitt took action against the couple, he may not have known that all the money was gone, Coffina said.

He also did not understand that bringing their story back into the public eye would put them all at risk of being found out.

It was their dispute over the money which triggered the investigation, Coffina said.

Asked if they would have gotten away with it if they had not begun fighting, he said: ‘They very well might have.’

‘Johnny Bobbitt deserves our appreciation for his service to our country and our sympathy… but it is imperative to keep in mind that he was fully complicit.

‘He posed in front of a gas station for a photograph that he did not buy gas from,’ Coffina said.

He went on: ‘I can’t imagine what was in Johnny Bobbitt’s mind.

‘Maybe he just didn’t appreciate that even the lawsuit would bring out this, he may not have known that all the money was squandered when he brought the lawsuit. 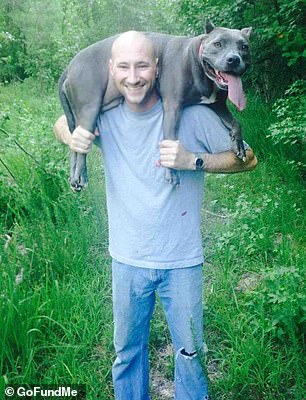 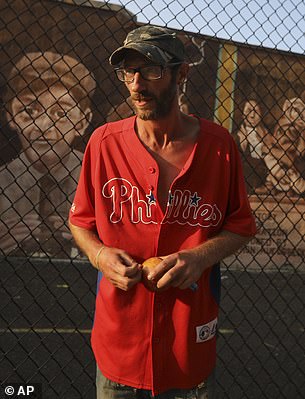 Prosecutors said they were grateful to Bobbitt for his military service and sympathized with his drug addiction and homelessness. They questioned whether he understood the full extent of the scam but said he was complicit. Bobbitt is pictured in August when he complained that the couple were keeping the money from him (right) and (left) years ago

‘All three of them had an interest in the story being fake not being revealed.’

Some of McClure’s friends and family pieced together that they had been dishonest, he said, but none are believed to have come forward despite some of them benefiting from it. They do not face charges.

‘They became aware over time. It’s asking a lot of a mother to come forward and turn in her daughter.

‘When the initial distributions were made, D’Amico and McClure did repay some family members money that was owed to them,’ he said. The total was $9,000.

Even as their story started to fall apart earlier this year, McClure and D’Amico tried their luck.

‘Giving him all that money, it’s never going to happen. I’ll burn it in front of him,’ D’Amico said in an interview with The Philadelphia Inquirer that year.

When asked for an exact figure of how much was left, they said they could not give one because the money was still being held in the account they used for themselves.

Coffina said he hoped the shocking story would not stop others from donating to genuine good causes in the future.

‘This type of case can damage the psyche of the public. It can make generous people skeptical and a little more hesitant to help someone else in need.

‘I urge you not to let this happen,’ he said.