Yoruba and Hausa clash in Ibadan, see photos and videos

The mess going on in Ibadan right now is situated at hotspots, Akinyele local govt. Ojoo, Sasa and Moniya axis. 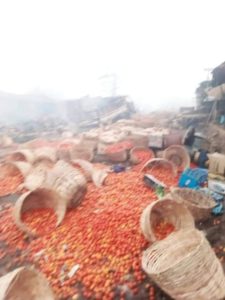 According to sources, while Amotekun and the Nigeria Police Force refused to pick their calls it was the so called “Hoodlums & Area boys” at Sagbe, Sasa and Ojoo, Ibadan who did most of the night watch to prevent the Fulani and Hausa people living in those areas from attacking people & destroying properties.

See photos and videos of the incident below

Sights from the deadly clash between Hausas and Yorubas in Ibadan, southern Nigeria. pic.twitter.com/od51t8uP7g

Ibadan, Oyo state has turned to something else, hoodlums have taken over the streets, please stay safe if you’re there.

RT to inform others. #EndSARS pic.twitter.com/dU9nUhsrcs