A Twitter user with the display name, Mr Roberts shared the short story of his 89-year-old Grandpa who recently joined the #EndSARS protest.

According to him, his Grandpa, Professor JTK Duncan fought in the Nigeria Civil War that lasted three years between 1967-1970.

He said his Grandpa revealed that he is proud of this current generation and he his not afraid for the future of his children as well as his greatgrandchildren.

The 89-year-old Grandpa rode a special bike coloured in green and black to the protest ground and he also fastened Nigeria’s flag to his native attire. 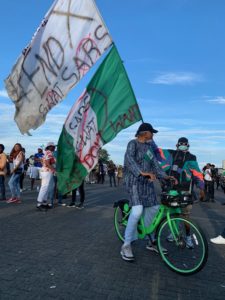 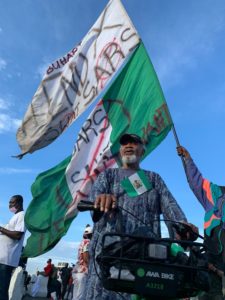 My Grandad Prof. JTK Duncan (fought in civil war) came out! He said “in his 89 years of being a Nigerian, he has never seen a generation move like us; it’s incredible, for the first time he’s not afraid of the future of his children through to his great grand ones”. #EndSARS pic.twitter.com/ZBuxecnwwR

The #EndSARS peaceful protest continued across different cities in the country even though the President of Nigeria’s Senate has appealed to the protesters to leave the streets.

Ahmed Lawan claimed that the genuine demands of the protesters have been heard by the Federal Government.

He said this after meeting with President Buhari at the Aso Villa alongside the Speaker of the House of Representatives, Femi Gbajabiamila.

The Protesters demand the immediate release of all arrested protesters, justice for all deceased victims of police brutality and adequate compensation for their families.

They also want better welfare for police officers as well as the creation of an autonomous body to supervise the inquiry and trial of all reports of police malfeasance.in the country.