Super Eagles of Nigeria midfielder Alexander Iwobi was in action for Everton as they beat Brighton and Hove Albion 4-2 in a Premier League encounter played on Saturday, October 3rd.

Dominic Calvert-Lewin  continued his good form scoring the first goal from a cross by Gylfi Sigurdsson to put Everton in front.

Iwobi who started the game on the bench came in for Richarlison in the 25th minute.

Brighton equaliser from a mistake by Jordan Pickford allowing Neal Maupay to slot home in the 45th minute.

Yerry Mina however converted a cross by James Rodriguez to put Everton in front at the halftime break.
Iwobi then created the third for Rodriguez in the 52nd minute. 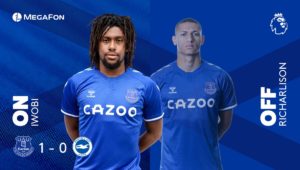 Rodriguez scored the fourth from a ball by
Abdoulaye Doucoure to seal the win. Yves Bissouma pulled one back but it was too late for Brighton.
Watch Iwobi provide his first assist of the season below