Speaking to the Premier League website after presented with the award, Ancelotti said, “I’m really pleased. “It’s a great achievement. I have to share with my team and my players.

“We’ve started really well and we hope to continue it and to win this award again.” 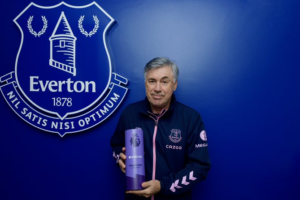 Ancelotti who is 61-years-old has won the Premier League Manager of the Month five times, his first four was while he was at Chelsea.

Watch video of Ancelotti below