ARRIVING in Madrid, the first thing that strikes you as you drive around the city is its huge size. 6.5million of Spain’s 46 million people live in the metropolitan area of Madrid, compared to 5.5million in Barcelona and 2.5million in Valencia where I’m coming from. However, the city of Madrid itself is home to 3.2million, which makes it the largest city in the European Union after the German capital, Berlin.

Another thing that strikes you is the modern architecture and infrastructure that you will find in most first world cities on our planet. Although Madrid, just like Valencia, was also originally founded by the Arabs who called it Mayrit, it has gone through centuries of transformation to become one of the most beautiful and cosmopolitan cities in the world today.

Narrowing our focus now to the football, where ever you turn in Madrid, you’re confronted by the fact that you’re in a football-mad city. Little surprise, as the city is home to probably the greatest football club ever, Real Madrid CF. 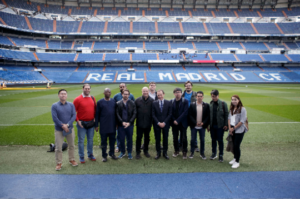 Now, I make no light of that assertion. Ordinarily, I have a soft spot for Barcelona in Spain just like I have for Liverpool in England, AC Milan in Italy and Shooting Stars in Nigeria. But writing this travelogue just hours after going on tour of the magnificent Santiago Bernabue stadium, and being taken through the rich history and expansive museum of Real Madrid, chronicling its great players and massive conquests, its impossible not to be impressed by what the club has achieved.

What more, FIFA actually picked Los Blancos as the greatest club of the 20th Century when giving them the FIFA Club of the Century award at a FIFA Gala in December, 2000. So, whether you love or loath Royal Madrid (“Real” in Spanish means “Royal” in English), they have the official FIFA trophy and badge to show that they’re the world’s greatest club until at least the award is given again at the end of the 21st century. 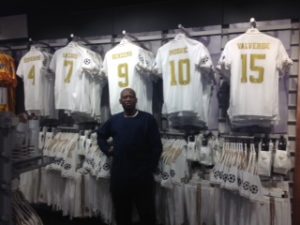 During my tour of the Santiago Bernabue stadium, I went deliberately into the home and away dressing rooms to try and simulate what the feelings would be like as Madrid and Barcelona take on each other in the 244th El-Clasico. I sat on Madrid captain Sergio Ramos’ personalized bench in the home team dressing room and reflected on how the month of February had been a nightmare for Los Blancos.

A seven-match unbeaten run prior to February had been followed in quick succession by a 4-3 defeat and elimination from the Copa del Rey by Real Sociedad; a damaging 2-2 home draw to Celta Vigo and 1-0 away defeat to Levante in the league had knocked Real off the top of the table; and a controversial 2-1 home defeat to Manchester City in the Champions League in a match that Ramos was sent off, had put a big question mark on their chances of advancing to the next round. 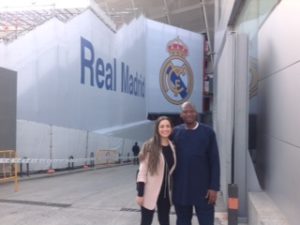 The timing of Real’s dip in form has been disastrous and I could picture the manager, Zinedine Zidane, standing in the middle of this dressing room and urging his wards to stem the tide. And what better way to do that than by beating their eternal rivals Barcelona in the El-Clasico, knock them off the top of La Liga where they currently have a two-point advantage, and get the home supporters celebrating again. Of course, Madrid will go out for the win, no question.

A short walk away from the home dressing room took me to the visitors section and here again, I switched over to thinking like a Blaugrana. There were no tags on the away team lockers, so I could only imagine where Lionel Messi would sit on the long benches fixed into the walls in a square shape. A few days prior, Manchester City players had sat on these same benches before marching out to beat Real Madrid in the Champions League. Barcelona have come here countless times and come out victorious. I couldn’t imagine Messi thinking they can’t win again in his favourite hunting ground. 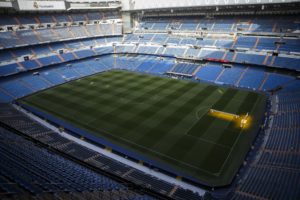 Coming into this game, Barca had only fared a little better than Madrid in February. They had also been knocked out of the Copa del Rey 1-0 by Athletic Bilbao, but had won all their league games 2-1 at home to Levante, 3-2 away at Real Betis, 2-1 at home to Getafe and 5-0 at home to Eibar in a match where Messi scored four times to end an embarrassing goal drought. Barca also managed to steal a 1-1 draw away to Napoli in the Champions League, which gives them a head-start going into the return leg at Camp Nou.

Barca’s recent results are better than Madrid’s but not necessarily their performances. They have struggled in many games and have definitely missed the injured Luis Suarez in attack, while Antoine Griezmann is yet to fully bed in with the team. New manager Quique Setien is not known to be defensive, but I could imagine him standing in the middle of this dressing room and instructing Gerard Pique to keep things very tight at the back. A draw will be to Barcelona’s advantage as it will preserve their two-point lead on the league table. But with Lionel Messi on the pitch, Barcelona always believe they can win any football match.

When these two teams met last December at the Nou Camp, the match ended in a cagey goalless draw. This time around, with the season approaching a climax and chances of winning trophies narrowing down only to La Liga at least for Real Madrid, I expect the home team to go for broke. That should translate to an open game with lots of chances to score many goals. 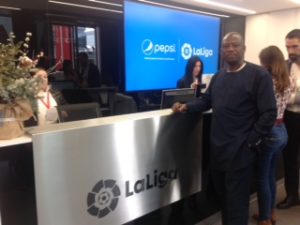 Actually, I was originally booked by La Liga to travel for that first game, but had to shelve the trip because of the Catalan riots going on in Barcelona at the time. This time, it’s the deadly coronavirus that is wreaking havoc across the planet, but I’m here already to report the game and the describe the atmosphere for readers of Complete Sports (www.completesports.com) and members of NaijaSuperFans (www.naijasuperfans.com)

La Liga have been generous to give me the mufflers of both teams and have left me to decide which I will wear to the stadium for the big game. I stated earlier that I am a fan of Barcelona, but for this Clasico, I have decided to honour our Real Madrid hosts by staying neutral. May the better team win.

PS: I dedicate this travelogue to the memory of Alhaji Abdulsalam Tunde Abass, a passionate football lover, whose death came to my knowledge just as I finished writing. Alhaji Abass was very dear to me as a senior member of our religious group, The Companion. May Allah grant him paradise, amen.