Ex-Eagles captain, Sunday Oliseh writes new book, “Audacity To Refuse” – Here’s how you can pre-order it

Former Super Eagles midfield star Sunday Oliseh is further expanding his range of talents with the upcoming launch of his new book, “Audacity To Refuse” which is slated for release on April 15.

The book is a collection of Oliseh’s 16-year football journey and details the everyday life of the professional athlete.

Oliseh wrote: “From the outside, the world only gets to see the professional footballer’s glamour moments and the seemingly easy lifestyle that comes with it. But the tough realities, extreme challenges, and sometimes near-death experiences that they have to live with day in, day out, will shock you.”

You can pre-order the book by clicking here 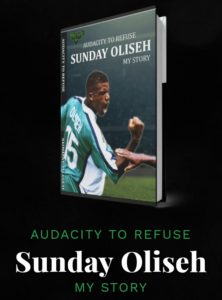 “Audacity to Refuse” traces the legendary Sunday Oliseh’s untold inside story from being a young footballer in Nigeria to starring for some of Europe’s greatest clubs. The book shares Oliseh’s rise to world-wide fame while dealing with innumerable trials and tribulations.

It is the story of a treasured sports icon who journeyed from childhood poverty to winning the Olympic gold medal for his fatherland, and multiple other trophies for clubs and country.

In the fascinating autobiography, Oliseh guides the reader through his time spent playing for top renowned football clubs, challenging notions of racism, confronting corruption in football administration in his country and gaining both respect and criticism for refusing to accept limitations placed before minorities.

Oliseh was a part of the AFCON-winning Super Eagles at Tunisia in 1994 as well as the USA ’94 team which qualified Nigeria for her first-ever FIFA World Cup appearance. He also won Olympic gold – Africa’s first in football – with Nigeria in 1996.