Super Eagles striker, Kelechi Iheanacho is gradually getting back to form after a start to the season as he scored the 90th winner for Leicester City over Brighton in the round of 32 fixture.

Kelechi Iheanacho’s goal which was the last action of the keenly-contested encounter shattered the hearts of Gary Monk’s men who would have preferred to drag the match to extra-time. 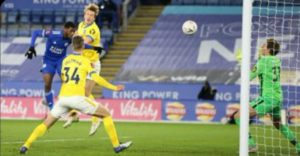 However, Brighton defenders didn’t turn to a pillar of salt but they glued to them as they observed social distancing protocol till the Nigerian striker who came in for Jamie Vardy in the second half, scored via a free header from a corner on the 94th minute.

Last minute goal by @67Kelechi secures quarter final.ticket for @LCFC in a one nil victory over @OfficialBHAFC #EmiratesFACup @LCFC pic.twitter.com/PyyhynlIsE

Kelechi Iheanacho has now scored five goals in all competitions this season having scored three in the Europa League. He is also repaying the faith, Brendan Rodgers.