The game started with fireworks and France went in front in the seventh minute when captain Zinedine Zidane converted a panenka penalty.

Italy found an equalizer through Marco Materazzi in the 19th minute as both sides went to the halftime break level.

The second half was closely contested as both defenses were resolute and the game went to extra time. 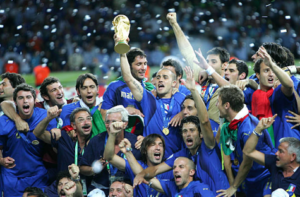 In the second half of extra time, an iconic moment happened as Zidane headbutted Materazzi on the chest.

Zidane was sent off in the 110th minute, and France played the rest of extra time with a man down as the game proceeded to penalties.

In penalties, Trezeguet missed while Wiltord, Abidal, and Sagnol all scored from the spot.

Pirlo, Materazzi, De Rossi, Del Piero, and Grosso all scored as Italy won their fourth World title in front of 69,000 fans in attendance at the Olympiastadion, Berlin Germany.

Watch highlights of Italy vs France below