It was Italy’s third World Cup triumph after a 44-year drought since their last win in 1938.

The game was tight and no goals were scored in the first half as both teams went to the halftime break level.

Italy will break the deadlock in the 57th minute when Paolo Rossi scored. 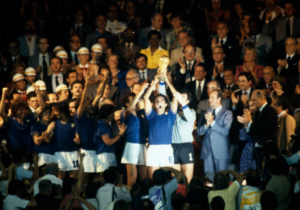 Italy doubled their lead in the 69th minute through Marco Tardelli while Alessandro Altobelli made sure of the result in the 81st minute with their third.

West Germany pulled one back through veteran Paul Breitner in the 83rd minute who had previously scored in the 1974 World Cup final.

Italy would be crowned World champions in front of 90,000 fans in attendance at the Estadio Santiago Bernabéu, Madrid.