The 2020 NBA finals continue with game two between the Los Angeles Lakers and Miami Heat played in the early hours of Saturday, October 3rd.

After a comfortable win in game 1, the Lakers continued their dominance with an outstanding performance in game 2. 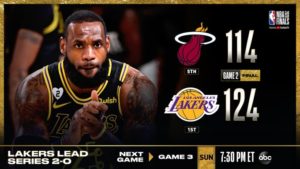 He had help from Anthony Davis who had 32 points and 14 rebounds with Rondo also contributing 16 points and 10 assists to propel the Lakers to a 2-0 series lead in the NBA Finals.

Watch Anthony Davis lift the Lakers to victory below