Manchester United continued their miserable form against the big sides in the league after playing out yet another goalless draw against Chelsea at Stamford Bridge.

For the first time since the 1921/1922 season in the English Old dividon, Manchester United and Chelsea both played out a goalless draw home and away in the league. 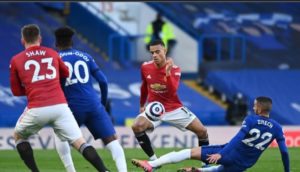 Both team their chances in the game but failed to convert as David De Gea and Eduoard Mendy both had a busy day in between the sticks with 6 and 4 saves respectively.

One of the talking points of the game came in the first half as Calum Hudson-Odoi appeared to have had contact with the ball with his hand in the eighteen-yard area. 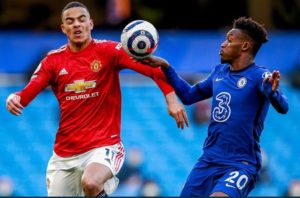 Referee Stuart Attwell after a VAR review ruled out what looked like a penalty for Manchester United.

However, Manchester United defender,  Luke Shaw has revealed why the center referee denied the away side the penalty.

The ref even said to H [Harry Maguire] that ‘if I say it is a pen then it is going to cause a lot of talks afterwards’. H got told it was a penalty.