Lionel Messi has called a temporary truce and will remain at Barcelona until June 2021, when his contract ends, according to TyC Sports.

This armistice comes after ten days of standoff dispute with president Bartomeu and the leadership after the famous burofax.

Although he had sent a burofax to execute the unilateral exit clause, he changed his mind and does not want to leave in the middle of a legal scandal at the club of his life, where he grew up and has been for 20 years. 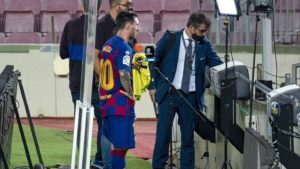 The 33-year-old Argentine star decided to continue for one more season to avoid having to go to court, something that could also have meant a headache for his hypothetical new destination, which seemed to be Manchester City. This came after a meeting on Tuesday between his father Jorge and President Josep María Bartomeu.

In this way, Messi will not have as his last game in a Barca shirt – 731 official matches, 634 goals and 34 titles- memories of the embarrassing 8-2 against Bayern Munich in the UEFA Champions League, but at least he will leave open the chance to have a proper goodbye to the Camp Nou, his second home and the land that saw him shine the most.

It remains to be seen if he will be comfortable, if he will fit well into the project of the Dutchman Ronald Koeman, what partners he will keep or incorporate and the challenges that will be in his possible last season at the club.