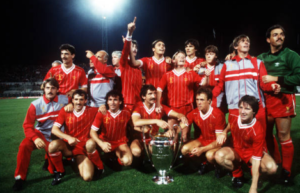 It was the fourth European title secured by Liverpool and they has to do it in front of 69,693 fans at the Stadio Olimpico, Rome home of their opponents Roma on the day.

Phil Neal gave Liverpool the lead in the 13th minute, Roberto Pruzzo equalized for Roma in the 42nd minute.

The game tied at the halftime break, actually ended 1-1 after 90 minutes and extra time before proceeding to penalties.

Nicol missed Liverpool’s first penalty, but Neal, Souness, Rush, and Kennedy all scored their spot-kicks for the Reds.

Di Bartolomei and Righetti scored while Conti and Graziani missed for Romad.

Watch video of the penalty below