It was the fourth time Ronaldo would win the prestigious trophy. 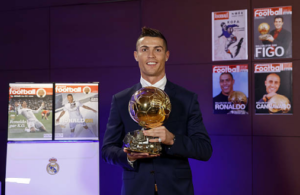