It is set to be a titanic clash when Chelsea host Tottenham Hotspur in a Premer League encounter scheduled for Sunday, November 29th.

The top of the table clash features Frank Lampard against his former manager at Chelsea Jose Mourinho at Stamford Bridge.

Lampard has given his thoughts on the London derby and why his side must beat Mourinho’s team.

Lampard made this known in the pre-match press conference for the game. 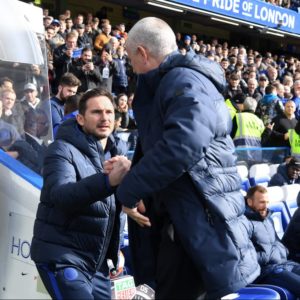 Lampard says beating Tottenham twice last season is not relevant for Sunday’s game. He notes they strengthened their squad in the summer, and their start to the season – and their line-up last night – has shown the depth of it.

On Sunday being Roman Abramovich’s 1000th game as Chelsea owner, Lampard says the best thing he and the players can do to mark it is to win on Sunday. Lampard adds a ‘huge thank you’ for everything he has done for Chelsea on and off the pitch.