Matt Czuchry is a self-assured, attractive, and energetic American actor. His celebrity has grown as a result of his roles in various Hollywood films. Matt’s ability to excel in a variety of roles has earned him a large fan base in the United States of America, both young and elderly.

In this part of the world, it is commonly chorused that “behind every successful man, there is a woman – his wife” but does is there a woman “behind” Matt Czuchry? Or who is Matt Czuchry’s wife?

In this piece, we shall be unravelling all the details you kneed to know about him, his background, career, as well as the answer to the question; Who’s Matt Czuchry’s wife?

Matt Czuchry is of those people who had to drop their University degree aside, despite doing very well to pursue their dream or what they are naturally good at.

One can even argue that acting chose Matt Czuchry and not the other way round because he didn’t have to go for a countless number of film auditions to launch his career. He only had one shot at fame during his University days, he took it and like it is said in the local parlance, the rest is history.

His last name might be a tongue twister ( pronounced as /Zu:kri/) but his rise to fame and prestige is as smooth as the Jebel Hafeet Mountain Road in the United Arab Emirates. He’s an is an American actor. He is recognized for his roles as Logan Huntzberger on The WB television series Gilmore Girls (2005–2007) and Cary Agos on the CBS television drama The Good Wife (2009–2016). Since 2018, he has featured as Conrad Hawkins on the Fox medical drama series The Resident. By the way, in case you are wondering what kind of name is Czuchry, it is a name popular in Poland. 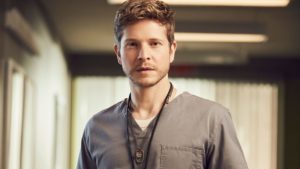 Matthew Charles Czuchry was born on May 20, 1977, in New Hampshire, but Matt was raised in Johnson City, Tennessee. He and his three siblings (two boys and a girl) are of mixed ethnicity as their father, a professor at East Tennessee State University are of Ukrainian descent. His mother is Sandra Czuchry, a homemaker.

He is well-educated no doubt. He attended Science Hill High School and then proceeded to obtain a degree in History and Political Science from the College of Charleston on a tennis scholarship. He received The Bishop Robert Smith Award. This award is the highest honour given to a graduating senior and represents valued contributions in academics, sports, and the community of Charleston, South Carolina. Matt Czuchry was also honoured with the College of Charleston Honorary Doctorate of Humane Letters in 2018 for his immense contribution in the arts.

It is interesting to note that Matt Czuchry’s career didn’t any film audition after he graduated. Instead, he had his first shot during a course like he too in the theatre while studying American History and Political Science in College. His Drama Professor was impressed skills and encouraged him to embrace theatre and he did.

He made his debut in acting in the year 2000 on the small screen in the series Freaks and Geeks. His subsequent project came that same year where he starred in the series Opposite Sex and Young Americans, respectively.

He continued to work diligently as the year progressed and his landmark roles came in 2004 where acted as Logan Huntzberger in the 2004 drama Gilmore Girls and as Cary Agos in The Good Wife which was aired from 2009 to 2016. These roles made him one of the many colours in the Hollywood movie industry to date.

These are some of the movies and  TV shows he has acted in and some of the awards he has won:

He is no just an actor but also an author. He core-wrote a non-fiction book titled; Brothers on Life in 2012. His net worth is reported to be in the region of $3m

Who is Matt Czuchry’s wife?

Matt Czuchry’s wife is not “behind” his successes in case you are looking for her. As of now,  no one is Matt Czuchry’s wife. The new Gilmore Girls star once said in an interview in 2013 that he enjoys being single.

However, before the Who is Matt Czuchry’s wife question began to dominate the headlines, he was once in a relationship with Kate Bosworth – a movie star. The duo who co-starred in the show Young Americans began dating in 2000, but after two years they called it quits.

What Social Media does Matt Czuchry have?

Matt Czuchry is on Instagram. He has over 10,000 followers on the photo and video-sharing application.

How do you pronounce Matt Czuchry name?

You can learn how to pronounce the name of the actor in this video below. Pronouncing his name can be difficult but watch how he pronounced it in the video.