Soon to be FC Napoli striker, Victor Osimhen has told aspiring footballers to place their trust in God not in any diabolical or fetish means if they want their dreams to come true.

While speaking with a group of young footballers withing the be age range of 15-20 presumably, the Super Eagles striker who spoke to the boys in pidgin said; “no need to tell babalawo to out skill for your leg, if you no sabi play, you no sabi play be that”.

He also advised the players to trust in God and work hard as money and other things they desire will come naturally.

Victor Osimhen stopped by to encourage and advise a group of aspiring pro footballers somewhere in Lagos earlier today. pic.twitter.com/oRaPXdyWDY

Victor Osimhen’s move to Napoli will be announced any moment from now after all agreements were reached today according Sky Sports Italy Journalist, Fabrizio Romano. The deal is said to be in the region of €60m including and ons and the striker has already penned down a five y we years contract. 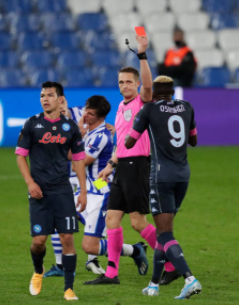