Odegbami is celebrating his 67th birthday today and was celebrated by the Amaju Pinnick led Nigeria Football Federation (NFF).

The message to celebrate the birthday of Odegbami was on the official Twitter account of the NFF.

The message on the NFF Twitter account said, “Today we celebrate the legendary Segun Odegbami @Mathematical7. Thank you for the memories and have a good one!

Today we celebrate the legendary Segun Odegbami @Mathematical7 . Thank you for the memories and have a good one! 🎂🎂🎂🎂 pic.twitter.com/1u8Mn4cs9X

Odegbami made a name for himself with Shooting Stars and won the Nigerian Premier League in 1976, 1980, 1983

With Nigeria he won a Silver medal at the 1978 All-Africa Games. 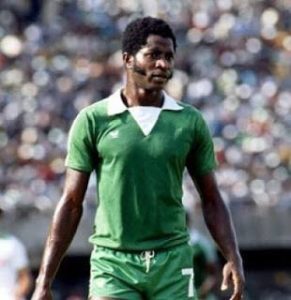 Won the 1980 Africa Cup of Nations where he was the top scorer and part of the Team of the Tournament.

Watch highlights of Segun Odegbami below

The best Nigerian that NEVER played in Europe or at the World Cup.

TV was black & white, magical feet & tricks, a winger that’s ahead of his time.pic.twitter.com/Y9JJcyEzj3