West Germany and Argentina both played in the previous World Cup final in 1986.

Maradona led Argentina to a 3-2 win at the Azteca Stadium, Mexico City.

Four years after the defeat, West Germany were aiming for revenge against Argentina in 1990.

The first half ended goalless and the breakthrough eventually came through when Andreas Brehme converted from the penalty spot in the 85th minute. 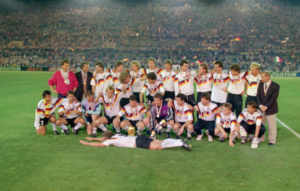 The goal was enough as West Germany held on with two Argentina players Gustavo Dezotti and Pedro Monzón sent off.

West Germany got revenge and lifted the World Cup in front of 73,603 fans in attendance at the Stadio Olimpico, Rome.

Watch highlights of the game between West Germany and Argentina below