Leeds United pulled one back through Liam Cooper just before the halftime break.

Daniel James scored the fifth, Bruno Fernandes converted a penalty for the sixth and his second of the game.

Stuart Dallas then scored the second for Leeds United but it was to late. 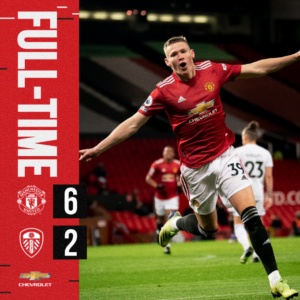 Here are three things we learned from the game.

This is the first time a club team managed by Marcelo Bielsa has conceded six goals in any competitive match since his Newell’s Old Boys side lost 0-6 to San Lorenzo in the Copa Libertadores in February 1992.