Chelsea take on London rivals Arsenal in the final of the 2019/20 FA Cup final on Saturday, August 1st.

Chelsea and Arsenal are prestigious winners of the competition on several occasions.

Arsenal took an early lead through Alexi Sanchez which they maintained till the halftime break.

In the second half, Chelsea were reduced to 10 men as Nigerian winger Victor Moses was shown a yellow card in the 57th and 68th minute which mean he received a red card. 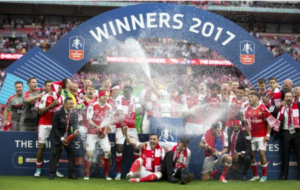 Chelsea would however go on to take the lead despite being a man down with Diego Costa converting in the 76th minute.

The lead did not last for Chelsea as Arsenal scored in the 79th minute through Aaron Ramsey.

The Gunners would hold on for the win in front of 89,472 fans in attendance at Wembley Stadium, London.