On August 1st, 1996 the United States of America (USA) beat the Republic of China to win the first-ever gold medal in the women’s football event at the Olympic Games.

It was the first time women’s football will take place at the Olympic Games and two of the favourites USA and China beat Brazil and Norway to get to the final.

Shannon MacMillan put the USA in front with a goal as early as the 19th minute.

Chine equalized through Sun Wen in the 32nd minute as both sides went to the half time break level.

The USA got back in front through Tiffeny Milbrett in the 68th minute. 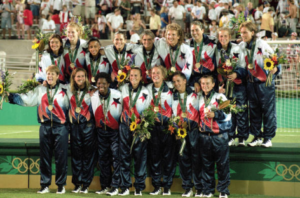 It would be the last goal of the event as the USA held on to win in front of 76,489 fans in attendance at the Sanford Stadium, Athens, Georgia.

The victory gave the USA the gold medal on home soil in Atlanta 1996.

Watch highlights of the final below