Nigerian born forward Ademola Lookman has reacted as his side as Fulham beat Leicester City 2-1 away at the King Power Stadium in a Premier League encounter played on Monday, November 30th.

Ademola Lookman gave Fulham the lead in the 30th minute from a ball by Andre-Frank Zambo Anguissa.

Fulham doubled their lead in the 38th minute from a ball by Ivan Cavaleiro.

Leicester City pulled on back in the 86th minute when Harvey Barnes converted a ball by Jamie Vardy. 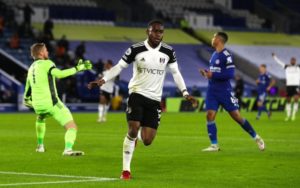 It was the first three points for Fulham this season and he gave his thoughts after the game.

Speaking after the game Ademola said

The lads grafted for each other to get that one for you! 👊#LEIFUL