The game was billed the clash of two titans who were among the pre-tournament favourites to lift the title.

The game started with fireworks as Algeria went ahead as early as the second minute through strike Baghdad Bounedjah goal which deflected off Salif Sane. 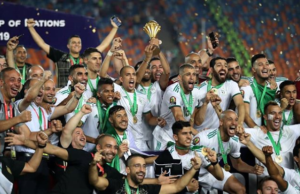 That would be the only goal of the game as both sides were solid on defense in what turned out to be a boring festival in the final.

Algeria would hold on to be crowned champions in front of 75,000 fans in attendance at the Cairo International Stadium, Cairo