Arsenal recorded back to back victories with a 1-0 away win against Brighton and Hove Albion in a Premier League encounter played on Tuesday, December 29th.

The first half ended without a goal but the breakthrough would come in the 73rd minute when substitute Alexandre Lacazette converted a cross by Bukayo Saka.

Arsenal would hold on to take all three points.

The Gunners have now won two games in a row. This victory comes after beating Chelsea in the London Derby played at the weekend. 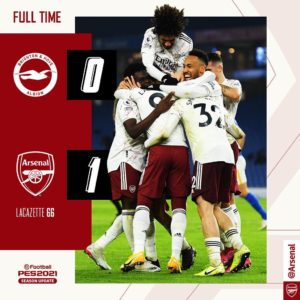 According to Opta,This  is the third time this season that Alexandre Lacazette has opened the scoring in an away Premier League game for Arsenal.

The win is good news for Mikel Arteta who has been under pressure due to previous bad results.